While some scientists argue the asteroid killed off the dinosaurs, new evidence from fossil eggs and eggshells says dinosaur diversity was declining well before it hit. 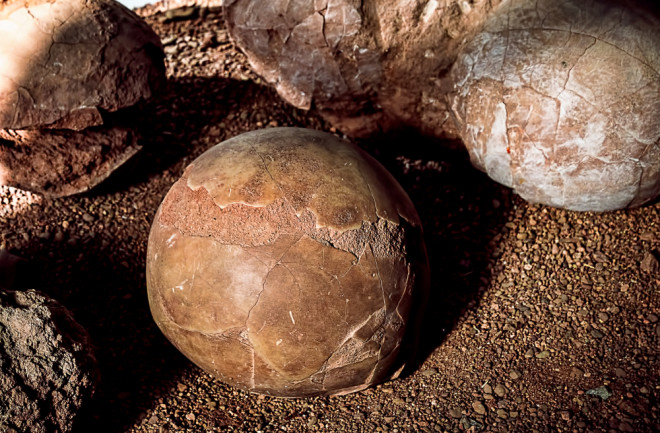 According to some scientists, a massive asteroid plowed into the planet approximately 66 million years ago. It sent ash into the atmosphere and provoked a period of such severe climate change that 75 percent of all plant and animal species, including all non-avian dinosaurs, suddenly disappeared.

But were these species doing well or doing poorly in the period prior to their demise? In other words, were dinosaurs increasing or decreasing in diversity in the years ahead of the asteroid?

Recent research in PNAS attempts to answer these questions. Relying on fossilized dinosaur eggs and eggshells from China in the two million years leading up to the impact, this research reveals that dinosaur diversity did, in all likelihood, decline well before the dinosaurs' eventual extinction.

To Thrive or to Dwindle?

Past scholarship on dinosaur diversity sends some pretty mixed messages. Though some studies suggest that dinosaurs of all shapes, sizes and species thrived before their surprise disappearance, others support the opposite idea, stating that decreasing diversity preceded the dinosaurs’ ultimate demise.

The issue with this scholarship is twofold. In addition to contradicting one another, these two types of studies also concentrate mostly on fossils found in North America, making their conclusions difficult to translate into worldwide trends.

Thus, a team of researchers aimed to determine whether dinosaurs' diversity increased or decreased on worldwide scale in advance of their extinction. The team from the Chinese Academy of Sciences assessed a plethora of fossilized eggs and eggshells from China. They found that dinosaurs did, in fact, dwindle, supporting the theory that several additional factors — including increased volcanic activity — exacerbated the effects of the eventual asteroid.

To finally resolve whether dinosaur diversity was increasing or decreasing prior to the disappearance, the team analyzed around 1,000 fossilized dinosaur eggs and eggshells from the Shanyang Basin of Central China. Dating throughout the two-million-year period prior to the die-off, these fossils allowed the researchers to construct a sort of timeline of dinosaur diversity.

This timeline eventually exposed a strong decline in the number of species in the years prior to the extinction. In fact, every egg and eggshell found at the site came from one of only three different dinosaur species, including the toothless Macroolithus yaotunensis and Elongatoolithus elongatus, as well as the duck-billed Stromatoolithus pinglingensis.

This small showing of species in the dinosaur eggs and eggshells, in combination with the few tyrannosaur and sauropod bones found in the basin, indicates that dinosaur diversity likely dwindled around the world in the two million years prior to the impact of the asteroid 66 million years ago.

Though the reason for this decline remains subject to debate. But the researchers state that the enormous eruptions of India's Deccan Traps in the lead-up to the impact could have contributed to worldwide climate change and instability. This would have decreased the diversity of dinosaur species and rendered any that remained all the more vulnerable to the decisive blow of the asteroid.