Does the Universe Need Dark Matter to Form Galaxies? A Controversial Model Says 'No' 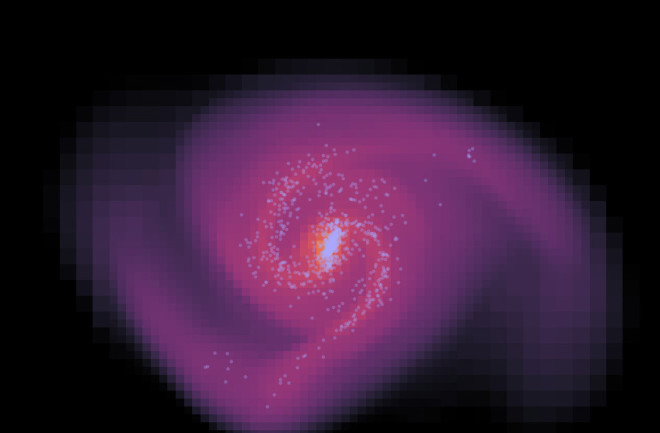 Astronomers simulated the formation of galaxies without including dark matter, in what some see as a win for a controversial model of the universe called Modified Newtonian Dynamics. Here, the light blue dots show the formation of young stars. (Credit: AG Kroupa/Uni Bonn)

For the first time, a group of cosmologists say they’ve created virtual galaxies inside their computers without any dark matter. Critics of dark matter see it as a win for a controversial model of how our universe formed, called MOND, or Modified Newtonian Dynamics. But this one result isn’t likely to convince most astronomers they should abandon decades of dark matter theory.

Research describing the new simulation is set for publication in the Astrophysical Journal.

The Birth of Galaxies

Our universe was born from the Big Bang some 13.8 billion years ago. And from the beginning, matter wasn’t evenly distributed; some parts of the cosmos were denser than others.

Astronomers know these variations existed because they can see them in the Cosmic Microwave Background (CMB) radiation — the relic radiation left over from the Big Bang. Gravity pulled more and more dark matter — the invisible material that binds the universe together — and normal matter into these regions until it formed a vast web of cosmic filaments that’s now spun throughout our universe. The first stars, and eventually galaxies, formed here.

Read More: What is Dark Matter Made of? These Are the Top Candidates

These basic bullet points are part of the standard model of our universe accepted by most astronomers. It’s called the “Lambda-Cold Dark Matter” model. The theory relies on dark energy to explain our rapidly expanding universe, and it employs dark matter to accurately create cosmic motion on the grandest scales, like spinning galaxies. Without dark matter, astronomers can’t explain the variations that eventually led to galaxy formation.

In recent decades, the standard model has done a good job explaining what astronomers see through their telescopes, with a few exceptions. But back on Earth, the conventional approach faces a major challenge: Despite decades of searching, and despite a handful of large-scale experiments, researchers have failed to find concrete physical evidence of dark matter.

And not everyone agrees there’s anything to be found. A small but very vocal group of cosmologists think dark matter doesn’t exist at all. Some of these scientists are making their case by exploring alternative models of the universe using computer simulations.

A simulation of galaxies (orange) and gas (blue) in the universe. There are rare pockets of gas left over from the Big Bang that have remained unpolluted by material from exploding stars. (Credit: TNG COLLABORATION)

Pavel Kroupa, an astrophysicist at the University of Bonn in Germany, is among these standard model critics. According to him, dark matter has become dogma. He cites a handful of real-world properties seen in galaxies that don’t make sense with dark matter. And he also questions many fundamental and widely accepted aspects of modern cosmology, from the idea that galaxies can merge to whether the Cosmic Microwave Background is really evidence of the Big Bang.

Kroupa has spent the past two decades pushing MOND, an alternative theory of the universe. Scientists who support this model believe that the most puzzling aspects of the cosmos — the ones that led astronomers to discover dark matter and dark energy — can actually be explained with slight modifications to Newton’s laws describing gravity.

But to convince the larger scientific community, contrarians like Kroupa have to show that MOND can actually recreate our universe while also explaining the same mysteries that first led astronomers to embrace the dark side. And until now, computer simulations using MOND have failed to build virtual galaxies that look like the real ones we see today.

So, other scientists skeptical of the standard model see this new study as a potential milestone.

“This is clearly an important study, because MOND was often criticized for not being able to describe galaxy formation in the same successful way as models based on dark matter,” says University of Amsterdam theoretical physicist Erik Verlinde, a prominent dark matter critic who was not involved in the research.

The Cosmic Microwave Background. (Credit: ESA and the Planck Collaboration)

The Problem with MOND

But Harvard University astronomer Avi Loeb isn’t convinced. He says that the physics of normal matter means it could not create the large-scale variations that astronomers see in the Cosmic Microwave Background. Radiation would smooth out small-scale disturbances in normal matter over time. But because dark matter doesn’t interact with radiation, it lets these variations grow from seeds to galaxies.

“The main issue with MOND is that it does not explain the evolution of the universe from its initial conditions, as evident in the Cosmic Microwave Background (CMB) to the present day,” Loeb says. He adds: “If there was only ordinary matter in addition to the CMB and no dark matter (which, by definition, does not couple to light), then galaxy formation would not have happened at all.”

For his part, Kroupa admits their simulation still needs significant work before it can fully capture galaxy formation and evolution. At the moment, the MOND universe inside their computer can only capture the initial phase of galaxy formation. His team wants to build on the model until their galaxies can grow and evolve.

“Once this is understood, and once we have understood how galaxy groups and clusters of galaxies form in MOND, we will begin developing a cosmological model which embeds MOND,” Kroupa says.

6 Amazing Images From the James Webb Telescope in 2022