Extreme Space Weather: Predicting and Engineering Our Way Around Storms From the Sun

The nature of space weather hasn’t changed much. But society has, and understanding and predicting space weather is more important than ever. 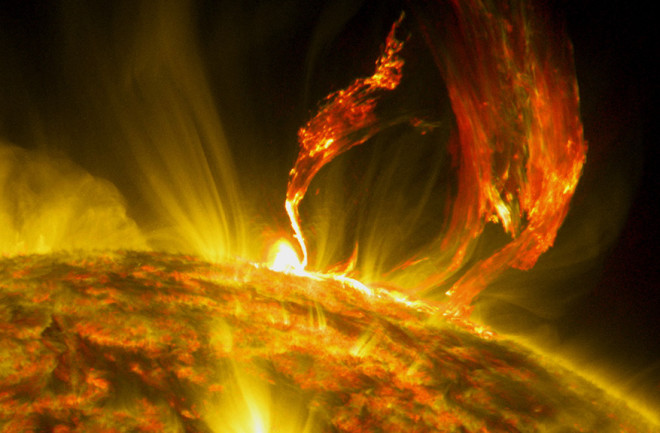 This image shows a CME that lifted off the Sun on June 18, 2015, captured by NASA's Solar Dynamics Observatory (SDO) spacecraft. (Credit: NASA)

Space weather is not something that most of us typically think about on a daily basis. But the Sun’s charged particles and magnetic field are constantly sweeping through space and colliding with the Earth’s own magnetic field. Occasionally, the auroras fill the sky with light dancing along these field lines. The most extreme space weather, however, happens when the Sun blasts billions of tons of energized particles directly towards the Earth at speeds up to 3,000 kilometers per second.

These explosions, known as coronal mass ejections (CMEs), lift off from the Sun’s outer atmosphere — the corona, and can cause intense geomagnetic storms, and negatively affect astronauts, satellites, and spacecraft.

CMEs really energize the Earth’s magnetic field, says James Spann, Space Weather Lead at NASA. “The impact of a CME on a magnetized body like the Earth can be very catastrophic depending on its size and speed.”

One of the most intense CMEs is believed to have taken place on September 1, 1859 (the Carrington Event), reaching Earth 17.5 hours later and setting off a large geomagnetic storm. Auroras were seen as far south as the Caribbean and telegraph lines caught fire as communications were disrupted at various locations across the world.

For almost a hundred years, scientists have known that the small to moderate CMEs are more likely to happen when the Sun is more active and producing more sunspots, roughly every 11-years. But there has been some doubt as to whether the most extreme events, like the Carrington Event, also follow the solar cycle.

In a new study, a team of researchers led by Mathew Owens, a space physics professor at the University of Reading in the U.K., have found that the most extreme CMEs are also more likely to occur during peak solar activity.

“These are the ones that we worry about the most, but they appear to be more predictable than once thought,” says Owens.

The researchers looked at 150 years of disturbances to the Earth’s magnetic field and picked out the most extreme CMEs to have occurred and compared them to the solar cycles. Dating back to 1749, we have experienced 24 full solar cycles, with the current solar cycle expected to be in the active phase between 2024 and 2026.

The Carrington Event occurred about six months prior to peak solar activity during cycle 10, which is in line with what we found, and since then there have been approximately six geomagnetic storms that would be considered the most extreme, says Owens.

The Effects on Terrestrial Technology

During a geomagnetic storm, changes in magnetic fields induce currents along power lines that can damage transformers and cause power outages. The most serious event happened on March 13, 1989, and left six million people without power in Québec, Canada for nine hours.

The potential impact on society is far greater today due to the vast extent to which we depend on technology, says Howard Singer, Chief Scientist at the NOAA Space Weather Prediction Center. “The number of technological systems that can be affected by space weather just keeps growing.”

Singer is referring to the 60,000 space weather product subscription registrants, some of whom rely on space weather forecasts and alerts to make informed decisions; for example, deciding when not to schedule power grid maintenance or when flights over polar regions need to be redirected. Space weather can even affect farmers who use technology such as GPS to help make decisions regarding how to best manage crops.

The interconnectedness of technological systems makes society especially vulnerable to large geomagnetic storms, as power outages can disrupt the delivery of essential goods and services. “Extreme events are rare, but when they do happen, we better be ready,” says Singer.

One of the main tools for predicting if a CME is headed towards Earth is the coronagraph— an instrument that blocks out the light from the Sun’s photosphere so that the corona and CME can be observed. The fastest CMEs arrive within a day of lifting off the Sun and can take up to four days to reach Earth.

On August 31, 2012 a long filament of solar material that had been hovering in the sun's atmosphere, the corona, erupted out into space at 4:36 p.m. EDT. The coronal mass ejection, or CME, traveled at over 900 miles per second. The CME did not travel directly toward Earth, but did connect with Earth's magnetic environment, or magnetosphere, causing aurora to appear on the night of Monday, September 3. (Credit: NASA Goddard Space Flight Center/Public Domain via Wikimedia Commons)

Risks to Satellites, Spacecraft, and Astronauts

CMEs can also pose a risk to satellites and spacecraft in space as charges can build up on the surface and inside electronics.

However, the effort that goes into monitoring the Sun for CMEs and engineering safeguards against the potential effects of space weather isn’t without reward.

Earlier this year, NASA observed a CME lift off the Sun on April 17 that was predicted to hit Mars when the Ingenuity Mars Helicopter would be conducting its second flight.

“We were happy that we could provide the warning that something was coming. We have done a lot to protect our satellites and spacecraft, but this was a new type of technology, so you never really know it is going to be perfect until it is tested in the field,” says Alexa Halford, a space physics researcher at NASA.

Engineering safeguards together with space weather prediction can also help reduce astronaut exposure to radiation that can be caused by CMEs. When we are thinking of human exploration of space, we want to know what we are getting into, just like if you packing for a vacation somewhere else,” says Halford.

When it comes to space weather, CMEs can produce some of the most extreme events on and above the surface of the Earth. Since the Carrington Event, scientists have come a long way in terms of predicting when extreme events could impact the Earth and understanding how to protect astronauts and instruments.

“We all live in the extended atmosphere of the Sun, so studying how solar activity varies and the response to that variability is really what heliophysics and space weather research is all about,” says Spann.