Some physicists think that we need to seriously update how we think of black holes. A theory that suggests they may actually resemble giant "fuzzballs" would do just that. 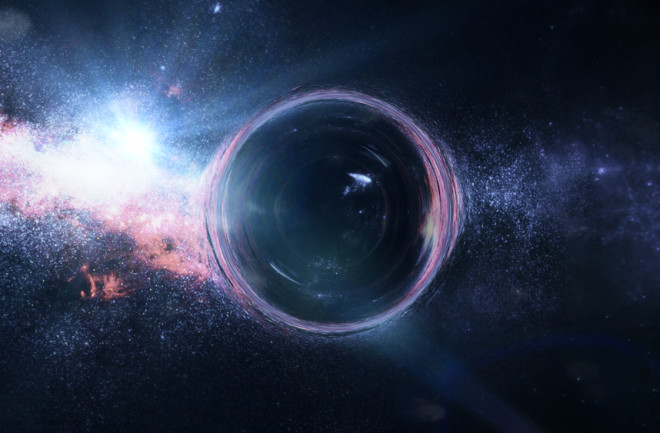 In the 1970s, Stephen Hawking discovered something impossibly wrong with black holes: It was mathematically possible for them to shrink or even disappear. If a black hole disappeared, that would mean that everything it had sucked in disappeared too. And in physics, stuff isn’t supposed to just disappear — it can change its form, but its component subatomic information still needs to exist in the universe. In other words, black holes, by their sheer existence, are capable of destroying information about subatomic particles that (according to quantum physics) shouldn’t be able to be destroyed. This problem — called the black hole information paradox — has plagued physics for decades. But theoretical physicist Samir Mathur has proposed a solution: changing the way we think of black holes and picturing them instead as “fuzzballs.”

Based on the traditional picture handed down by the likes of Einstein, “quantum mechanics is violated when you have a black hole,” says Mathur, a professor at The Ohio State University who specializes in black hole physics. “Once you have a situation like that, you actually don’t have a theory of physics.” It’s the job of physicists, he says, to reconcile general relativity, which explains the behavior of big things, and quantum mechanics, which works for the extremely tiny. Mathur believes that the fuzzball theory could do just that.

The Traditional Picture of Black Holes

The information paradox — and the fuzzballs that might resolve it — hinges upon the structure and behavior of black holes themselves. Black holes owe their existence to the attractive force of gravity. “If you have a lot of mass somewhere, then everything in that mass attracts everything else,” says Mathur. “If it's a star, every point in the star attracts every other point in the star. So it tries to shrink.”

That shrinking results in a super-dense region of space-time that gobbles up everything that encounters it (even light) called a black hole. Though don’t let fear of getting sucked into a black hole keep you up at night, says Lia Medeiros, a National Science Foundation postdoctoral fellow at the Institute for Advanced Study; you’d have to get really close for that to happen. From far away, a black hole behaves like any other object with a lot of gravity, like a star. But if you were to drift too close to a black hole, you’d reach a point of no return called the event horizon, “the distance from the black hole where even if you’re moving at the speed of light, you still can’t escape it,” explains Medeiros.

And beyond that event horizon, the traditional thinking goes, there’s a whole bunch of empty space, with all the stuff that the black hole has consumed squeezed into one tiny point in the middle. We call that point of compression the singularity.

Two problems arise from this traditional model of a black hole, says Fabio Pacucci, an astrophysicist at Harvard University. One is that the idea of a singularity — a point of infinite density and infinite gravity — doesn’t play well with the natural world. Pacucci recalls a high school physics teacher who told him, “If you find an infinity, this is not physics, it's mathematics.” Nature doesn’t deal in infinities, he says. “You will never find a tree that is infinitely tall, or a planet that is infinitely massive.” While it’s possible that black holes are the one thing in nature with infinite properties, it makes sense to be skeptical.

So the singularity is a problem. And, as it turns out, so is some of the behavior we see around a black hole’s event horizon. Stephen Hawking and his colleagues showed that black holes radiate energy. That in and of itself isn’t an issue, but it carries a lot of mathematical baggage. The process, called Hawking radiation, involves the case of a paired particle and antiparticle popping up next to the event horizon of a black hole.

It’s possible that one of them (let’s say the particle, but it works both ways) would interact with the event horizon and then go spinning back off into space, without picking up any of the information inside the black hole to take with it. Its antiparticle twin, though, could get sucked into the black hole. Once inside the black hole, that lone anti-particle could meet a single particle, resulting in the two, in Pacucci’s words, “annihilating each other.”

“It seems to an external observer that the black hole is actually losing mass, one particle at a time,” says Pacucci. That would result in the black hole losing a tiny bit of the information associated with that particle, and information is supposed to always be conserved. Therein lies the paradox. It’s also worth noting that this scenario could only happen on a very small scale, because there aren’t enough free-floating anti-particles to happen en masse. But even a little information loss is a big problem. Given enough time, this very slow process could ultimately lead to an entire black hole disappearing.

At its heart, the information paradox arises because black holes straddle two worlds: They can be massive, and thus should follow the rules of general relativity, but they also shrink to an infinitesimally tiny point, making them quantum territory. Physicists have been trying to reconcile their picture of black holes with quantum mechanics for decades. The fuzzball solution, proposed by theoretical physicist Mathur, involves creating a whole new picture.

Like many physicists, Mathur had been puzzling over the paradoxes of black holes for many years, and just couldn’t figure it out.  But then he and his colleagues turned to string theory, which holds that everything in the universe is made up of tiny, vibrating strings. They mathematically modeled what a black hole made up of strings would look like. “We found it was not looking like the traditional picture at all,” says Mathur. “Instead of shrinking to a point and leaving all the empty space around it, it actually fluffed up into something which we call the fuzzball.” Mathur first arrived at the fuzzball hypothesis in 1997. He's continued refining and advocating for the theory ever since.

The fuzzball theory does away with the concept of the event horizon and the singularity. Instead, it allows the information consumed by the black hole to be distributed throughout the region as a messy ball of strings. By getting rid of the event horizon, a stray particle or antiparticle falling into a black hole doesn’t result in information destruction; rather, that new information simply gets added to the fuzzball. You still get your ever-hungry black hole, but you don’t need to worry about it shrinking and taking information along with it.

“A fuzzball is so insanely dense that you drop something into it, and it stays in there, but it takes an insane amount of time for the thing to come out again,” says Nicholas Warner, a physicist at the University of Southern California. In that sense, a fuzzball mimics the traditional model of a black hole. However, Warner says, a fuzzball actually behaves more like a very dense star, such as a white dwarf, than like the black hole described by general relativity. That’s because we can still retrieve information from inside a white dwarf. “There's no information problem with a white dwarf,” says Warner. “They're very dense states of matter, but in principle, you can measure it, and you can see what happens to the state of it as it evolves. Whereas a black hole, once it falls past the horizon you can never see anything inside. A fuzzball is just an incredibly exotic state of matter.”

Some physicists have embraced fuzzballs instead of the traditional picture of black holes — Warner’s been using them in his work for twenty years. But the fuzzball theory isn’t the only possible solution to the information paradox, nor the only way to reconcile general relativity and quantum mechanics. Other scientists have proposed that the answer might lie in islands, firewalls, holograms, or wormholes. All of these theories try to account for the “missing” or destroyed information first noticed by Hawking.

While the calculations surrounding the fuzzball theory work out on paper (or in computational programs), fuzzballs and black holes don’t behave differently enough for researchers to test their existence in nature. “I tend to want things to be tested,” says Medeiros, who co-coordinates the gravitational physics working group for the Event Horizon Telescope, the worldwide network of telescopes used to capture the first image of a black hole in 2019. “And it's very hard to test string theory.”

Some researchers avoid picking sides when it comes to the various proposed solutions to the information paradox. “I like to take a bit more of a pluralistic view of things. I don't think that there has to be one approach,” says A.W. Peet, a physicist at the University of Toronto who has used fuzzballs in their work on the information paradox. Lately, though, they’ve been pursuing the holographic principle, which treats black holes as two-dimensional screens rather than 3D objects, with consumed information preserved on the event horizon. “I do think that the arguments between people who are taking different approaches have yielded some very fruitful results,” Peet notes, but “I think that perhaps the drive to come up with a ‘one true answer’ to a question and discount other approaches might not be the most fruitful way forward.”

Madeiros says she isn’t married to any one theory, either. Still, she notes that scientists are at the beginning of a new era of black hole astrophysics. “ I think that this is the beginning of what I hope will be a very fruitful new field, where we can finally bring together astrophysics and high energy theory.”

Meanwhile, Mathur’s work doesn’t stop at fuzzballs. He’s now applying his findings to the rest of the universe, since its expansion is almost a mirror image of a black hole contracting. “Everything you understand in the sky, you have to understand the magic of black holes first,” says Mathur. “Quantum gravity changed the entire structure of the black hole. So now the question is, ‘What does it do for the entire structure of the entire cosmology?’ I think it has changed.”

What Happens To Us If Earth Falls Into A Black Hole?