Now you can borrow science equipment from local libraries and help researchers advance science, like by measuring light in the night skies in your community. 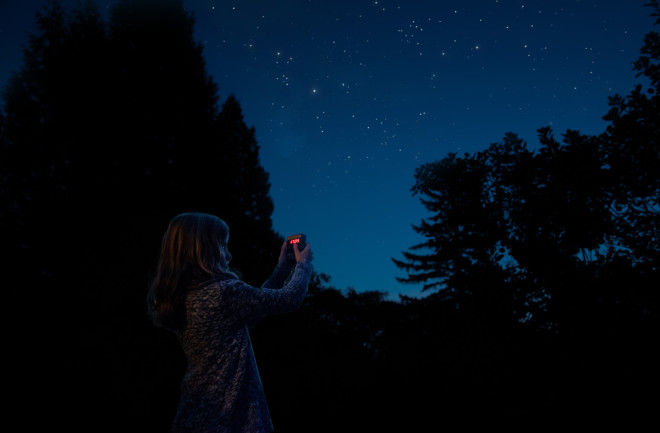 Citizen Science Salon is a partnership between Discover and SciStarter.Org.

For most of human history, we slept under the stars. Instead of staring at electronic screens, our ancestors watched the light from the heavens. Things have changed dramatically in recent decades. Seven out of 10 people living in the U.S. today have never seen the Milky Way. Light pollution from street lights, homes, businesses and sports fields now obscures the night sky. And the problem is only getting worse.

But today researchers are also spreading the word about the harms of light pollution, and even going beyond to begin finding solutions. One such group is Globe at Night, a National Science Foundation-funded citizen science project.

Globe at Night asks volunteers to go outside and measure light pollution in their communities using either the naked eye or a simple piece of equipment called a Sky Quality Meter. These devices use extremely sensitive silicon sensors to detect the amount of light in a given area, creating an easy measurement of night sky brightness.

Globe at Night enlists citizen scientists — volunteers who help researchers collect and analyze data — to take Sky Quality Meters out into their communities and measure light pollution. Over the course of 15 years, more than 200,000 people from 180 countries have collected light pollution observations, helping scientists better understand its impact on energy consumption, wildlife, and human health. Globe at Night has also become the world’s most successful light pollution awareness campaign.

“If we can get people to consider the impacts of light pollution and the loss we will incur to future generations if it continues, they might be willing to start helping by doing something simple,” says Constance Walker, who heads Globe at Night and also works as a scientist at the National Science Foundation’s National Optical-Infrared Astronomy Research Laboratory. “People can consider the lights they have and turn them off if they’re not needed, or shield them and point them down.”

A great example of Globe at Night’s impact comes from a large-scale study done by volunteers in Tucson looking at light pollution and bats.

Citizen scientists collected more than 3,500 observations across the city, helping researchers with the Arizona Game and Fish Department piece together how artificial light might be impacting the animals’ movements.

Through their observations, scientists learned that light pollution, as well as habitat loss and loss of the ability to echolocate, were playing a role in changing how bats travel across the Tucson area. As a result, officials could tap into real data to help make decisions about what policy actions may actually help the bats.

It’s not just animals, either. Studies using light pollution data have shown that exposure to artificial light at night has serious negative consequences for human health. And there’s also the cultural element.

“We’ve been looking at the same sky for thousands of years,” Walker says. “Besides myths, there’s countless ties to the night sky in literature and songs and art. You have all these examples of people being inspired by the night sky — not just scientists but artists. Think about the loss of this source of inspiration if you can’t give this exposure to future generations.”

But researchers can’t collect light pollution data all over the world on their own. They need citizen scientists’ help in local communities.

A Sky Quality Meter is used to measure light in the night sky. (Credit: Emily Maletz)

Thanks to support from the Institute of Museum and Library Services and the Moore Foundation, SciStarter and Arizona State University have developed kits and resources for a growing number of libraries to loan Sky Quality Meters, along with other relevant tools. Just like books, these citizen science library kits are available for anyone to check out. (You can visit SciStarter’s landing page to find out what citizen science tools are available to check out at your local library.)

The project aims to help libraries become community hubs for citizen science by developing a field-tested, replicable suite of resources.

Libraries have proven to be strong partners for citizen science projects because they already know their local communities, and they have a long history of supporting learning opportunities. For librarians, citizen science is just another opportunity for discovery and learning that builds on their trusted role in communities.

So far, libraries across much of California and Arizona have begun lending out citizen science kits, but any library can get involved. And individuals can also build these light pollution kits themselves.

“The kits are available for any library or any person anywhere to customize and build,” says SciStarter founder Darlene Cavalier, professor of practice at Arizona State University’s School for the Future of Innovation in Society. “SciStarter has posted the ‘recipe’ for creating these light pollution citizen science kits online, as well as links to buy the dark-sky meter.”

In addition to the Globe at Night kit, there are a variety of other kits available through local libraries that let volunteers get involved with citizen science projects you can do at home. You can check out kits to help hunt zombie flies, monitor air quality and observe pollinators.

Algal Blooms May Have Threatened These Ancient Cities

There Was Less Lightning During COVID Lockdowns, Research Finds

Yes, Glitter Really is Bad for the Environment