How to Explore the Stars Without Ever Leaving Home

A "Dynamic Orbital Slingshot" could be just the thing for visiting interstellar comets while they're blazing through our solar system. 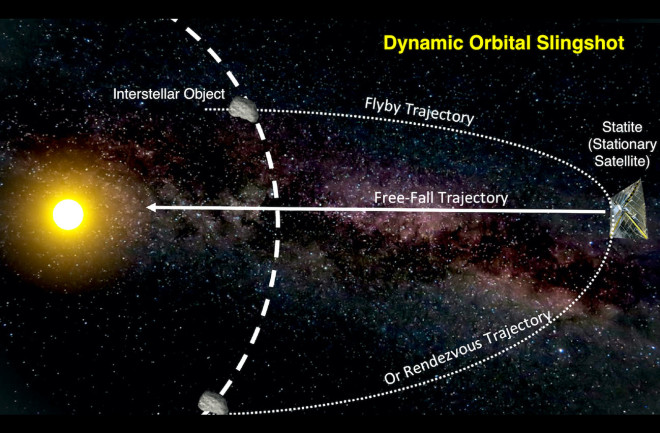 Catch an interstellar comet by the tail: A hovering spacecraft (statite) would lie in wait, then use the Sun's gravity to dive in toward an object of interest. (Credit: Richard Linares)

Let's face it, we're not going anywhere, at least not anytime soon. Anyone who grew up on a diet of science fiction—often Star Trek or Star Wars of one generation or another—has at some point felt the longing for actual, real-world interstellar travel. Then come the hard doses of adult reality.

We have no remotely plausible technology that could transport humans to planets around other stars. We don't even the technology to send a tiny robotic spacecraft to another star system in a timely manner. (People are thinking about it, but even the proof-of-concept experiments have not yet begun; first test flights are probably decades away at minimum.) Hell, with COVID-19 still raging, many of us are barely making it out of our homes right now.

Or maybe we're just thinking about the problem the wrong way. Richard Linares, the co-director of the Space Systems Lab at MIT, has an idea that could make our science-fiction dreams come true a whole lot faster. We can't travel to the stars, he acknowledges, but the stars are already coming to us; all we have to do is find a way to catch up with them as they pass. And he thinks he has a way to do just that, using a creative kind of hover-and-attack spacecraft that he calls a Dynamic Orbital Slingshot.

It's a rather far out concept, but NASA sees some promise in it: The agency's NASA Innovative Advanced Concepts (NIAC) program just gave Linares and his collaborators a "Phase I" grant to explore the feasibility of the slingshot for a real space mission.

None of this would be happening if not for the mysterious, comet-like object known as 'Oumuamua, which swung past the Sun in the fall of 2017. Its hyperbolic orbital trajectory flagged it as an interstellar object, meaning that it originated from some place far beyond our solar system. Astronomers had long speculated that comets might escape from other planetary systems and pass through our own, but this was the first concrete proof.

What made the discovery of 'Oumuamua especially exciting is that it was followed very shortly by the sighting of a second interstellar visitor, Comet Borisov, last August. One such object might be a fluke. Spotting two interstellar comets in such rapid succession means that they must be extremely common; apparently we just weren't able to detect them before.

Now it is clear that interstellar visitors (of the inanimate kind) pass through our solar system all the time, which means that there are lots of potential targets to explore. And soon we'll be a lot better at finding them. The upcoming Rubin Obseratory, set to begin operations in 2022, will scour the night sky for anything that moves or changes. By some extrapolations, it could easily identify one new Borisov-like object every year.

Visiting one of those objects up close won't be easy, however. Even with the eagle eye of the Rubin Observatory, we won't have a lot of advance warning that a new interstellar comet is headed toward the inner solar system. At best, we might have a few years of warming; more likely, it would be measured in months. That's not much time to prepare an intercept mission.

Interstellar objects also come in hot—that is, they come in fast. Comet Borisov arrived from deep space moving at 32 kilometers per second, and its orbit past the Sun looked more like a bent line than a tidy planetary ellipse. Short notice plus high velocity equals a very elusive target.

That's where Linares and his Dynamic Orbital Slingshot come in. His idea is to have a network of space probes already out, just there lying in wait for an interstellar visitor to arrive. These would be very unusual types of spacecraft that he calls "statites," or static satellites. Unlike every other object in the solar system, they would not orbit the Sun. Instead, they would hover in place.

Normally, the Sun's gravitational pull makes such hovering impossible. The statites would compensate by using enormous solar sails, each one attached to a lightweight cubesat-style probe. If the sail is large enough and thin enough, the pressure of solar radiation would be great enough to balance out the pull of gravity, allowing the statite to live up to its name.

Hovering would allow the statites to pull off a neat trick. As soon as astronomers spot an inbound interstellar object, the statite would change its orientation of its sail so that sunshine no longer holds it in place. It would immediately start falling rapidly toward the Sun, using solar gravity to accelerate it like a slingshot—hence Dynamic Orbital Slingshot. Adjusting the angle of the sail would allow it to steer, setting an intercept course for the interstellar target, all without the need for any onboard propellant.

Many news stories (including a confusing press release from MIT) implied that the staties would be placed at the edge of the solar system. Linares clarifies that the sunshine out there is too weak to enable hovering. "At the moment, we are considering constellation stationed at 1 AU [Earth's distance from the Sun]. We believe that this might be an optimal placement in terms of balancing mission cost and the ability to reach the interstellar objects," he says.

Note that he mentioned the word "constellation." Interstellar objects could arrive from any direction. To be sure he can design a reasonable interception course, Linares realized he would need multiple statites parked in different locations around the Sun. "Five to eight statites is within the ballpark of a feasible constellation," he says. "They will have overlapping coverage, and we believe that each statite can cover a fairly wide range of incoming heliocentric trajectories."

Richard Linares with a few of his Earth-based projects. (Credit: MIT)

A slingshot trajectory around the Sun would provide enough velocity that the statite could catch up to its target and match its velocity. Instead of a brief, high-speed flyby, the probe could execute a leisurely encounter, studying the object in depth. "The benefit of this constellation is that we could rendezvous with just five to six months of notice before the interstellar object's closest approach to the Sun," Linares says.

The statite could potentially drop a little lander on the comet, studying its surface up cose. Dream hard enough, and you can even imagine landing a probe with its own energy source (a radiothermal generator, for instance) so it could operate for years and monitor the comet as it races back out into interstellar space.

No surprise, there are some major technical hurdles to clear before this marvelous fleet of interstellar interceptors could become a reality (there's a reason NASA is supporting it under an "advanced concepts" grant). The biggest unknown is how to build a solar sail that is light enough, big enough, and strong enough to pull off the hovering trick.

"The parameter that's important is the combined area-to-mass ratio of the spacecraft. Currently, the proposed concept will require exotic materials to achieve the required area-to-mass ratio with a cubesat size payload," Linares notes. "However, we will explore variations on the concept that may allow for use of conventional materials."

In engineering-speak, "exotic materials" are things that don't exist, and that may not exist for a long time yet. The Dynamic Orbital Slingshot is very much a concept in development. Linares plans to use his NIAC grant to begin filling in the details of what a statite mission might look like, how to design the sail and attached probe, the kind of science it could return...and of course, what this whole grand project might cost.

It helps that Linares is not the only one thinking about these kinds of interstellar explorations. Engineers at the nonprofit Initiative for Interstellar Studies have come up with a concept that they call Project Lyra. Rather than using a solar sail, Project Lyra would strap a probe to a huge rocket like NASA's upcoming Space Launch System and aim it very close to the Sun, skimming just 3 million miles above the solar surface.

By firing the rocket's thrusters right at the point of closest approach, the probe would get a tremendous speed bump—enough that it could catch up with a target like 'Oumuamua even as it is fleeing back to the stars. The Project Lyra team estimates that they could reach it by 2049, assuming that their probe were ready to launch early in the 2030s.

Project Lyra is still a flight of fancy, without any funding or government agency to back it up. There is, however, another comet intercept mission that is very real: the European Space Agency's Comet Interceptor, current set to launch in 2028.

After launch, Comet Interceptor will park itself at the Sun-Earth gravitational equilibrium point called L2. Like the Dynamic Orbital Slingshot, Comet Interceptor will hover and wait for a suitable cometary target to show up. Its capabilities are much more modest, however, since it will still be in orbit around the Sun, and it will have only a modest amount of onboard propellant.

Comet Interceptor will be capable of only a brief, high-speed flyby past a comet. It's primary goal is to study a fresh solar-system comet—one that has never before passed close to the Sun—rather than an interstellar comet. "But if an interstellar object happens to turn up with the right trajectory at the right time, it would be too good an opportunity to turn down,” says astronomer Colin Snodgrass at the University of Edinburgh, who is the mission co-leader.

If Comet Interceptor is successful, we could have our first interstellar encounter by the early 2030s. Such a triump would certainly boost the likelihood that concepts like the Dynamic Orbital Slingshot would turn into real projects. Soon we could be making multiple trips to the stars—all from the comfort of our solar system home.