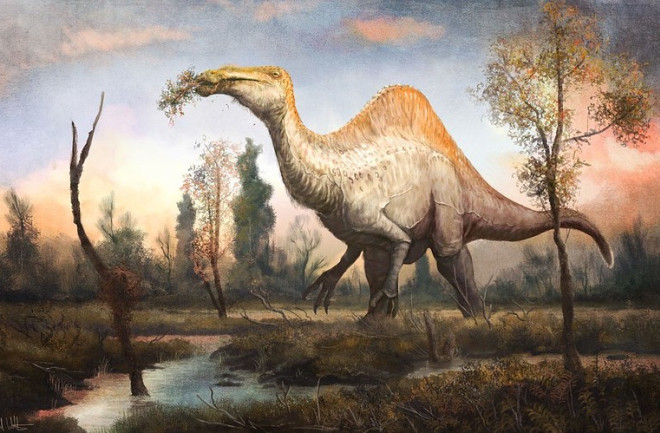 The two species identified in the study are similar to other ostrich-like dinosaurs, like the Deinocheirus pictured here (Credit: Mark Witton/Creative Commons).

The North America of the Cretaceous Period approximately 100 to 66 million years ago was a far cry from the North America of today. Not only was the continent split into two separate landmasses, Laramidia in the west and Appalachia in the east; it was also dominated by a variety of dinosaur species, some of which bared a striking resemblance to the modern ostrich.

According to a paper published in PLOS ONE, the analysis of fossils from an ancient formation of rock in northern Mississippi has now revealed two new species of these ostrich-like dinosaurs, one of which was among the largest in the world. The analysis has also advanced scientists' understandings of dinosaur diversity in the Appalachian section of Cretaceous North America.

To uncover this mystery, researchers investigated a handful of 85-million-year-old fossils from northern Mississippi and identified two new species of ornithomimosaur. Looking like all other previously described "bird-mimic" dinosaurs, these two new species had ostrich-shaped torsos, small heads, and powerful, long legs. Taken from one medium-sized and one large-sized ornithomimosaur, these fossils provide new insights into the amount and variety of dinosaurs in Appalachia's enigmatic past.

"The co-existence of medium- and large-bodied ornithomimosaur taxa during the Late Cretaceous," the study authors say, according to a press release, "does not only provide key information on the diversity and distribution of North American ornithomimosaurs from the Appalachian landmass, but it also suggests broader evidence of multiple cohabiting species of ornithomimosaurian dinosaurs in Late Cretaceous ecosystems."

Found in the Mississippian region of the Eutaw rock formation, the fossils’ proportions and patterns of growth helped the authors conclude that the fossils came from two different-sized ornithomimosaur species.

According to the authors, several species of ornithomimosaur roamed the Appalachian landmass at once and some of these species reached massive sizes. Which means, these facts are part and parcel of two general patterns identified among other dinosaur groups from North America and Asia. That said, future research can only explain the reason why these two patterns were so widespread across the two continents.