Colonialism's legacy still casts a shadow over the way paleontologists conduct their research and learn about the world. Some researchers are trying to expose and reform that pattern. 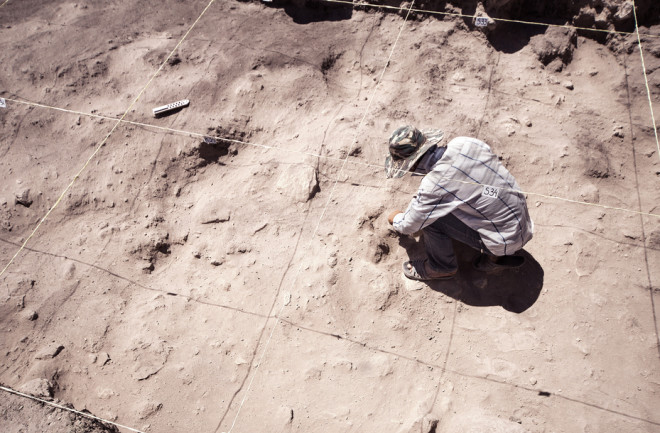 Paleontologists devote their lives to the study of the past, looking for connections that explain how we arrived at the world around us today. It’s fitting, then, that some paleontologists are examining the origins of their discipline’s modern landscape. These scientists are addressing the wooly mammoth in the room: that colonialism still dramatically shapes paleontological research and collaboration, long after the so-called Age of Empire.

While people around the world have studied nature, including fossils, for thousands of years, the modern disciplines of natural history and paleontology were born in the last several hundred. Colonial voyagers traveled the world, documenting and, in many cases, extracting plants, animals and fossils that they felt could be of economic and scholarly benefit. These expeditions set the course for today’s science, and specimens collected then still are used by modern researchers to understand concepts like climate change and habitat destruction. But the colonial mindset that backed these expeditions and built natural history museums makes frequent appearances in the study of nature.

“Things that should have stayed in the past are not in the past. They still echo in the present,” says Juan Cisneros, a paleontologist at Brazil’s Universidade Federal do Piauí. For many years, Cisneros says, this colonial legacy often went unacknowledged in academic spaces: “Paleontologists usually don't talk about this. It's like a taboo.”

Some paleontologists, however, are increasingly speaking up on the colonial biases and systemic racism present in their field — conversations catalyzed in part by the Black Lives Matter movement. And as scientists, they come prepared with data, statistical analysis and peer-reviewed papers to back up their observations.

The Data on Colonialism

A new paper in Nature Ecology & Evolution strikingly illustrates the link between colonialism and paleontological research, using data from the widely-used Paleobiology Database. “We looked at how socioeconomic factors and the history of colonialism affects research in paleontology,” says Nussaïbah Raja-Schoob, a Ph.D. student in paleontology at the University of Erlangen-Nuremberg and co-lead author of the paper.

The study reveals that researchers in so-called “Global North,” or rather, higher-income and upper-middle-income countries, contributed to 97 percent of the paleo data currently in the database. Raja-Schoob and co-lead author Emma Dunne, a paleontologist at the University of Birmingham, pored through 29,000 publications from 1990 to 2020, taking note of where scientists were from and in what countries they conducted their fieldwork.

“Colonialism was not even on our radar when we started,” Raja-Schoob says. “We did know that we wanted to look at socioeconomic factors, and this is where we started. But as we manually went through the data, we started seeing links.”

While a nation’s wealth, as reported by the WorldBank and the United Nations, was important, Raja-Schoob and Dunne uncovered the biggest factor influencing a country’s paleontological productivity with one yes-no question: “Has this nation benefited from colonialism?”

The result was unexpected, but not because the researchers were naive to colonialism’s legacy. “I wasn't surprised at the result itself. I was surprised at how much the data could be used to explain this,” Raja-Schoob says.

This data-forward approach was important for the researchers because statistical evidence could be valuable in convincing their fellow scientists of the problem, especially more senior scientists with power within the field of paleontology. “The people we wanted to talk to are basically paleontologists and/or academics who actually use these same methods for their research,” Raja-Schoob says. “And I think this was very important because this is a language that people we were aiming at understand.”

The recent study also examines some of the ways that colonialism is visible in paleontology. One notable example is “parachute science,” where researchers travel to a country, conduct their research with little or no input from local scholars, then leave.

“They come, they work there, but there's no skills exchange. There is no collaboration. There is just taking of the resources and leaving,” says Aviwe Matiwane, a paleobotanist at South Africa’s Rhodes University and a co-author of the paper led by Raja-Schoob and Dunne.

Sometimes, she says, the local experts who show visiting researchers where to find fossils and assist with excavation will be reduced to a footnote or a line in the paper’s acknowledgements, even when “they actually were key and were the co-contributors to the whole project.”

This sidelining of local expertise can help perpetuate a lack of funding and academic power for paleontologists from the Global South, and it’s a roadblock to a more complete understanding of ancient life. Cisneros says that if parachute scientists don’t collaborate with local scientists, or worse, if they obtain fossils from illicit markets, they miss key contextual information about the region and the specimens, and “all of that results in bad science.”

Cisneros adds that there’s not much excuse these days for researchers who claim they can’t find local experts to collaborate: “Welcome to the internet. Welcome to the 21st century. It’s difficult to hide nowadays. … We do want collaboration, but it needs to be real collaboration.”

While Raja-Schoob and Dunne’s article focuses on colonialism on a national level, colonialism is also present within individual countries’ treatment of Indigenous peoples. The U.S., for instance, is cited as one of the top countries in terms of contributing paleo-data, but there is a pattern dating back to the 19th century of fossils being taken from tribal lands.

“American paleontology is founded upon fossils dispossessed from the Native American historic land holdings,” says Lawrence Bradley, a paleo-historian at the University of Nebraska at Omaha and an activist for Native representation in paleontology.

Bradley’s activism is informed by his Oglala Lakota Sioux family members and events he’s witnessed in which Native communities have been sidelined from paleontology. Removing fossils from Native land and making them inaccessible to Native students “hurts reservations a lot,” he says. “Every kid loves a dinosaur, but that can segue into other branches of science like medicine” that could benefit tribal communities.

He also suggests that the money museums make from fossils taken from Native land could be used to “build educational pipelines, scholarships, some type of restitution with a tribe.”

There are some legal protections against parachute science. Countries like Brazil and South Africa have enacted laws to restrict the removal of fossils. The Standing Rock Sioux Tribe created a paleontology code in 2015 to address loopholes about fossils in the 1990 Native American Graves Protection and Repatriation Act. But fossil rights alone don’t solve ongoing issues of funding and resources to prepare, study and display specimens. Nor do they solve the systemic racism faced by Black, Indigenous and other people of color in science.

“Paleontologists in the Global South continue to be disadvantaged due to no fault of their own,” says Cassius Morrison, a paleontology Ph.D. student at University College London and the founder of the group Paleontologists Against Systemic Racism. “People aren't being lazy, people [aren’t] not trying.”

Many of the changes that need to happen are sweeping and systemic, but Raja-Schoob notes, “Systems are made of people.” She and her co-authors suggest that funding bodies should provide joint funding schemes to benefit different countries participating in a project, and that scientific journals should make research more accessible by providing translations into languages besides English and doing away with paywalls and high fees for open access to papers. Morrison also says that if journals and funding bodies reward ethical behavior on the part of paleontologists, it could encourage more inclusivity.

Dunne says that shedding light on the ongoing effects of colonialism is just the beginning. Steps toward decolonization would require tangible solutions and changes playing out. "Decolonization is an action, it involves actually doing something," she says. “Hopefully, people when they’re having these discussions will see that the best thing they can do is use their power to bring up and empower somebody else.”