The lunar surface has seen dramatic changes throughout its existence, but it may have looked a bit familiar beginning about 3.8 billion years ago. 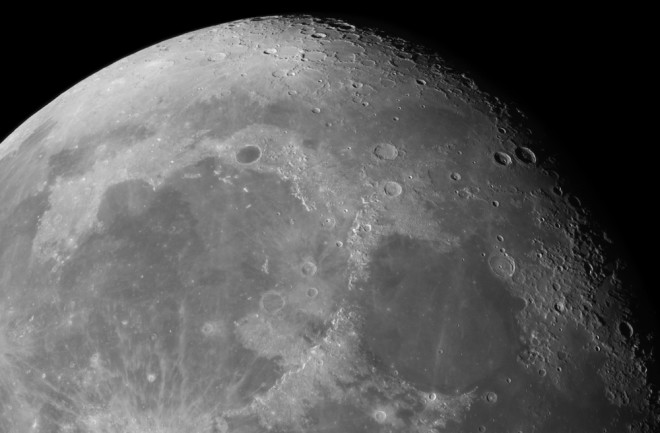 All in all, the moon looks pretty sprightly despite its 4.5 billion years of age. Forget the craterlike pockmarks and freckles — the Earth’s close companion is still pretty enough to inspire songs, poetry, paintings and even the timing of mating seasons within the animal kingdom.

“The moon is of the Earth. I think everyone has an emotional connection, whether they think so or not,” says Amanda Nahm, a program officer in NASA’s Planetary Science Division.

But did the moon always look this picturesque? If humans were around 2 billion years ago, would they have glimpsed the same iconic features?

Not quite, according to Nahm. The lunar surface has seen periods of major change throughout its existence and undergone some heavy makeovers.

The moon was created out of destruction. About 4.5 billion years ago, 30 to 50 million years after our solar system came together, a Mars-sized planet called Theia smashed into Earth. The astral collision kicked up a massive amount of material into orbit, some of which eventually coalesced into the moon over several hundred million years. (In fact, some of the remains of Theia may still be buried inside the Earth). At that point, she says the moon was mostly molten, and it was located much closer to the Earth.

As the moon’s magma ocean of melted and ejected material cooled, much of it separated based on density. Heavy iron sank into the core and lighter material floated up to the surface. Once it cooled, the top layer eventually became the moon’s crust. This entire process is referred to as the Pre-Nectarian period.

Around 4 billion years ago, a massive meteor struck the south pole of the moon. Today, the South Pole-Aitken basin measures about 1,550 miles in diameter, though it isn’t exactly visible from Earth because it sits on the far side of the moon.

The moon likely experienced other impacts before the South Pole-Aitken basin was formed, but the evidence vanished due to the surface’s molten state. Once the crust formed, it allowed for the development of additional craters.

Nectaris, Imbrian and the 12 Rings

The Nectarian period is defined by 12 different impacts that started with the formation of the Nectaris basin about 3.9 billion years ago and concluded with the emergence of the Imbrium basin (the Man in the Moon’s “right eye”) roughly 3.8 billion years ago. Plenty of the objects that struck the moon came from the inner solar system, Nahm says. Many hit the lunar highlands and kicked up material. “Essentially you can think of what the moon would look like as a major concentration of impacts, particularly on the near side,” Nahm says of the consequent Imbrian period.

From the Earth’s perspective, the near side of the moon had then begun to resemble its current state. “During this time is when most of the features we’re used to seeing on the surface of the moon formed,” Nahm says.

After impact, the resulting basins filled with darker lava that hardened to become the dark spots, called mare, that are still visible on much of the moon’s near side.

“There’s this misconception that the formation of the basins caused volcanism,” Nahm says. “What was more likely to have occurred was [impacts] just created these low spots, and fractured the crust, allowing the material from the interior to have a way to get to the surface.”

Lava was certainly still flowing on the moon by about 2 billion years ago, according to recent analysis of material gathered by China’s Chang’e-5 lunar mission. But Nahm says that at that time, “the moon would be extremely recognizable to anyone on Earth today.” The dark spots comprising the iconic Man on the Moon feature would have already appeared, along with characteristics known collectively in Japanese culture as the Moon Rabbit.

Features called wrinkle ridges grew inside the impact craters over a billion years ago, likely caused by tectonic movement under the surface, Nahm says. And in more recent times — around 50 million years ago — narrow valleys called graben began to form on the moon.

Possibly due to shallow moonquakes, visible fault lines called lobate scarps cropped up in some places within the last billion years or so. Also over this period, the moon continued to experience smaller impacts, and solar winds likely caused shifts in the lunar regolith. Regolith is essentially a mixture of loose dust and rocks that covers the moon’s bedrock. Impact can redistribute this material — as can footprints.

To Nahm, the moon’s features are particularly intriguing because they reveal a rich history. Earth has also taken a number of hits over the past 4.5 billion years, but our surface is much more dynamic: Tectonic activity, erosion and tidal movements have erased many of the craters on our blue planet. But the moon is a different story. “It’s just been sitting there gathering information, waiting for us to read it,” Nahm says. “The moon is very near and dear to my heart.”

4 Facts About Asteroids You May Not Have Known