Researchers discover ancient pterosaurs had feathers that were a splash of color, too. 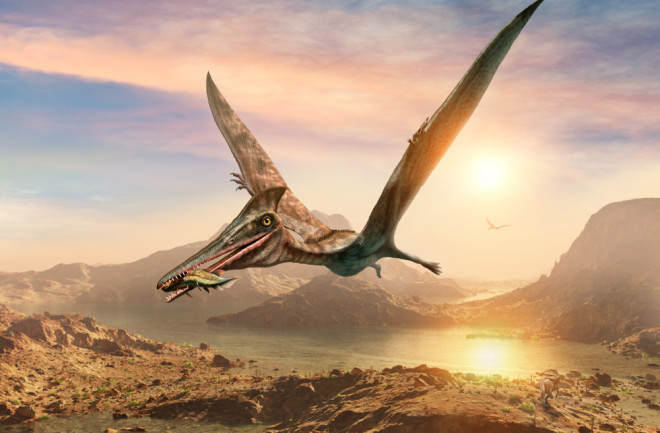 Near the coast of present-day Brazil, marine sediment preserved a bird-like pterosaur with a 10-foot wingspan, disproportionately large head and prominent cranial crest for a hundred million years.

In 2015, Aude Cincotta, a paleontology Ph.D. student at the University of Namur, realized with her colleagues that they were looking at a remarkable fossil. It contained the large, mostly intact head crest of an adult Tupandactylus imperator.

“In order to have this exceptional level of soft tissue preservation, the fossil has to be rapidly covered in sediment and kept in a low oxygen environment,” says Cincotta, now a postdoctoral researcher at the Belgian Institute of Natural Sciences.

With this fossil, Cincotta and her team discovered that not only did pterosaurs have feathers, but their feathers displayed color patterns. Importantly, this meant that avemetatarsalians, a clade of reptiles that lived during the early Triassic Period, were the first creatures to develop colored feathers nearly 250 million years ago.

Where Feathers Evolved From

Though pterosaurs were the first vertebrates to fly, their cousins, the dinosaurs, were the direct ancestors of modern-day birds. By the time of the T. imperator’s death, pterosaurs and dinosaurs had evolved separately for nearly 140 million years. But researchers can trace each of their lineages back to avemetatarsalians.

And for feathers, scientists have long debated if they evolved with dinosaurs or if they had older evolutionary origins. For many years, experts called the feather-like structures found in pterosaur fossils pycnofibers. Scientists imagined them as stiff hairs that helped the creatures stay warm. In 2019, a Chinese research team observed feather-like “branching” in two specimens of preserved pterosaur pycnofibers.

Cincotta and her team’s research on the T. imperator fossil though, has ended this debate. They found immaculately preserved feathers with a simple, branched structure. Because experts have observed feathers in both pterosaurs and dinosaurs, they suggest the evolutionary origin is the ancient avemetatarsalian.

While feathers help modern birds to fly, pterosaur feathers were not used for this purpose. Instead, they may have been involved in thermoregulation, or to maintain body temperature, and perhaps display. Cincotta’s research indicates that T. imperator’s large headrest was also colorful. It could be that this display was intended to catch the eye.

The Discovery of Color

Now that researchers have clear evidence that pterosaurs had feathers, there are more questions to answer. What kind of feathers did they have? How similar were the ancient feathers of avemetatarsalians to ones of modern birds?

Cincotta was interested in color. Modern birds develop distinctive coloration in their feathers for various purposes. Tiny subcellular organelles called melanosomes that are found in skin cells express color. The DNA of a bird with red tail feathers contains the genetic code for a certain melanosome, which produces red pigment. A different melanosome, with a different structure and shape, produces each color.

Earlier research suggested ancient reptiles did not have the ability to express patterns of color in their feathers (or pycnofibres). The pterosaur melanosomes were instead haphazardly distributed throughout their skin. But Cincotta used a high-powered electron scanning microscope to observe the geometries and distribution of melanosomes in the T. imperator’s head crest.

“The electron scanning microscope allows us to see very, very small structures,” she says. “We found that the melanosomes had different shapes, therefore they had different colors.”

Each piece of new knowledge about our planet’s ancient inhabitants gives rise to new questions. In the case of pterosaurs, one is answered and many more remain uncovered. It’s up to scientists like Cincotta to decipher the layers of ancient sediment and the genetics of modern animals.

Finding The 164,000-Year-Old Tooth Of A Young Denisovan Girl