The enormous radio dish, which will not be rebuilt, spent nearly six decades scouring the sky for radio signals while nestled in the foothills of Puerto Rico. 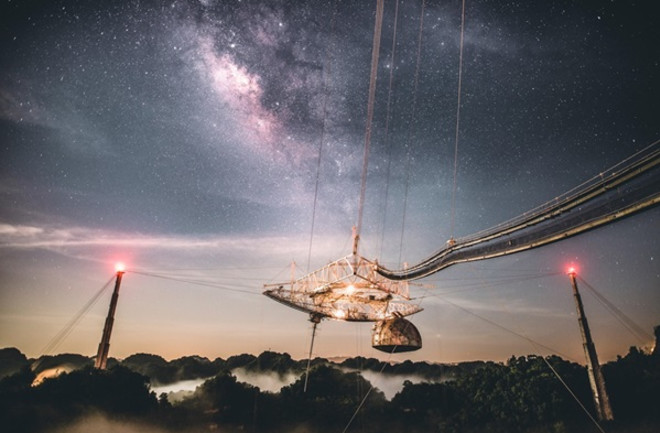 “The control room had this incredible view of the telescope. You’re there working, focused. But there are times you remember, you’re here, you’re controlling this huge instrument in your hands. What a magnificent thing. I mean, there’s no way you can go throughout the night and not remember it. That is a constant. It never grows old.” — Carmen Pantoja Arecibo Observatory/NAIC

Early on Dec. 1, 2020, 800 tons of steel collapsed into a yawning, forest-fringed concrete bowl once featured in a James Bond movie. But it took no fevered gunfire between Pierce Brosnan and Sean Bean to bring down what had once been the world’s largest single-dish radio observatory. Instead, the 1,000-foot-wide (305-metre) dish of the Arecibo Telescope owed its sad demise to the steady and inexorable creep of old age.

The Rise of Arecibo

The Arecibo site lies in a natural concave sinkhole nestled in the karst mountains of Puerto Rico. (Credit: Arecibo Observatory/NAIC)

Arecibo owes its name not just to the jaw-droppingly spectacular telescope that found silver-screen fame in both GoldenEye and Jodie Foster’s Contact. The facility has also won awards in mechanical, computer, and electrical engineering. Arecibo was even added to the U.S. National Register of Historic Places in 2008.

The site also features a suite of sky-scouring radar and lidar hardware, which remain operational today. Twelve miles (19 km) to the north of the facility lies the city of Arecibo, whose 88,000 residents call this four-century-old colonial patch of Puerto Rico home.

But Arecibo’s legacy in radio and radar astronomy and atmospheric physics, as well as its searches for extraterrestrial intelligence and harmful near-Earth objects, had darker origins.

Arecibo Observatory and the Cold War

In the 1950s, tensions between the United States and the Soviet Union chilled into the Cold War. As both superpowers built arsenals of city-flattening ballistic missiles, the Department of Defense sought new ways to intercept incoming Soviet warheads should they near American shores.

The Advanced Research Projects Agency (ARPA) recognized that radar decoys would make it difficult to spot long-range weapons, much less repel them. But they soon discovered that high-velocity warheads ionize regions of the atmosphere that reflect radio waves, so sensitive radar detectors can adequately track them. As a bonus, such radar data could be used to improve our understanding of the ionosphere, a highly ionized atmospheric layer that extends from about 30 miles (50 km) to 600 miles (960 km) above Earth.

In 1958, Cornell University proposed an ambitious radio observatory to ARPA, framing it as a dual-use facility for radio astronomy and ionospheric physics. Early plans envisaged a fixed parabolic reflector (shaped like an inverted spherical dome), overhung by a tower housing the antenna ‘feed’ at the central focus of the huge dish below. Rather than a tower, however, designers ultimately settled on a suspended feed to both limit functional difficulties and save millions of dollars in costs.

The solution for Arecibo was thus to hoist its receiving antennas, secondary and tertiary receivers, and electronics astride a pair of great metallic trusses, one doughnut-shaped, the other bow-shaped. These were connected by groups of 3-inch-thick (8 centimeter) suspension cables to a trio of large towers, affording the reflector a virtually unimpeded view of the sky.

When Arecibo opened its doors in November 1963 as the Arecibo Ionospheric Observatory, having cost an estimated $9.3 million to build, the reflector’s 20-acre size made it the world’s largest radio telescope, a title it held for more than a half-century. This record was finally surpassed in July 2016, when China’s Five-Hundred-Meter Aperture Spherical Telescope (FAST) entered service.

Ownership of Arecibo passed from the Department of Defense to the National Science Foundation (NSF) in October 1969, and it was managed by Cornell University for more than four decades.

With this transition from military to civilian hands came a name change to the National Astronomy and Ionospheric Center (NAIC). Sixteen directors — hailing from the United States to Australia to Norway to Uruguay to Italy to Puerto Rico itself — turned Arecibo from a military-led Cold War asset into a multi-disciplinary research facility whose name now remains synonymous with exploration.

The Arecibo radio telescope stood for 57 years, working on the cutting edge of astronomical research. For most of its lifetime, it was the largest single radio telescope dish in the world, only surpassed in 2016 by the Five-hundred-meter Aperture Spherical Telescope in China. (Credit: Arecibo Observatory/NAIC)

This shift led to an increase in scientific output. But even during its early military phase, Arecibo still provided insight into the universe around us. For example, in April 1964, five months after opening its doors, Arecibo astronomers measured Mercury’s rotation rate (59 Earth-days).

In more recent years, Arecibo mapped the ice distribution at the polar regions of the solar system’s innermost planet. It also acquired radar images of Mars, as well as helped to identify lakes of hydrocarbons on the surface of Saturn’s large moon, Titan.

Arecibo helped researchers uncover the 33-second periodicity of the Crab Pulsar, which provided physicists with their first solid empirical evidence of the existence of neutron stars. And its observations of a new type of pulsar contributed to Russell Hulse and Joseph Taylor Jr. winning the Nobel Prize for Physics in 1993. Additionally, Arecibo made the first radar observations of Comet Encke and imaged the potentially hazardous near-Earth object 4769 Castalia, which made a relatively close approach to Earth in Aug. 1989, venturing within about a dozen Earth-Moon distances.

The Arecibo Message of 1974

For all its valuable scientific contributions, however, it was the so-called Arecibo message that won the observatory real popular acclaim. In November 1974, scientists used Arecibo to send out a message toward Messier 13, a globular cluster of more than 100,000 stars located some 25,000 light-years away in the constellation Hercules.

The Arecibo message’s 1,679 bits of data included a crude graphical depiction of a human being, the position of Earth within the solar system, and the double helix of DNA. Although never meant as a serious effort to facilitate communication with extraterrestrials, the Arecibo message was an early demonstration of our technological capacity to do so.

The Demise of Arecibo Observatory

The crumpled remains of Arecibo’s receiving platform lie strewn across the valley below in this photo taken one week after its collapse. NSF is consulting with Puerto Rican historic preservation authorities to identify objects of scientific and cultural value to be preserved and displayed onsite or in museums. (Credit: Michelle Negron, National Science Foundation)

Diminishing funds and its neglected, aging infrastructure ultimately proved to be Arecibo’s Achilles’ heel. Some funding was secured by academics, politicians, and the media for repairs and the construction of a small radar for very-long baseline interferometry. NASA even financed further research into near-Earth objects. But environmental impact assessments and surveys were already trending toward a decommissioning and demolition of the great dish.

Then, in September 2017, Mother Nature showed her hand. Hurricane Maria battered Puerto Rico with merciless Category 4 winds, peaking at 155 mph (240 km/h). During the onslaught, one of Arecibo’s line-feed antennas broke loose and tore a 100-foot (30 m) gash in the dish. Earthquake damage followed in 2019. And in August and November 2020, Arecibo suffered corrosion-related breakages in cables holding the suspended antenna feed.

As repair costs spiraled, the observatory’s structural integrity hung precariously in the balance. The NSF finally announced that it would dismantle the huge dish.

But fate, sadly, had other plans. At 7:55 A.M. local time on Dec. 1, 2020, in a span of less than 30 seconds, the age-weakened hardware and moisture-related corrosion caused the supporting cables from one of the three towers to fail and snap, sending Arecibo’s suspended antenna crashing more than 500 feet (150 meters) into the dish below.

It was a sad end for Arecibo.

Fortunately, you can still visit Arecibo Observatory, as the site’s radar and lidar installations and visitor center remain operational. As debris salvage efforts continued into early 2022, the desire to preserve this unique historical site remain juxtaposed with dreams of someday resurrecting it in another form.

In the meantime, although superseded in size by China’s FAST and other radar installations across the globe, the loss of Arecibo’s great dish has left a gaping void our ability to effectively do radio astronomy.

And that void, at least for now, remains vacant.

This article was originally published on astronomy.com.