The food-seeking behavior of a simple organism is helping astronomers trace the universe’s vast cosmic web, dark matter and all. 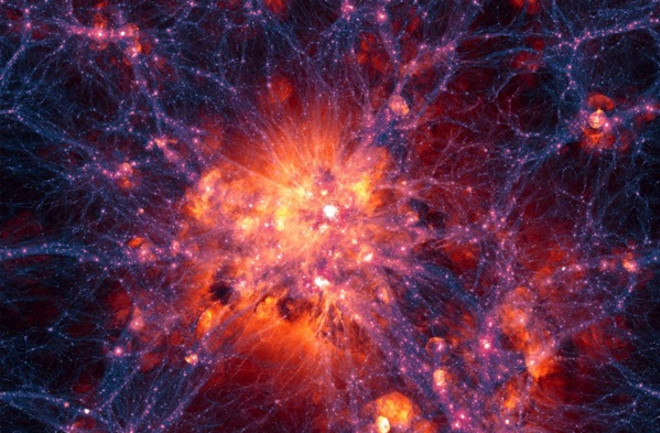 This snapshot of a detailed computer simulation (unrelated to this study) shows the complex structure of the cosmic web. Long filaments of dark matter (blue) connect knots of galaxies and galaxy clusters (pink), while gas (orange) permeates throughout. By modeling and observing the cosmic web, researchers are gaining insights into the structure and evolution of the early universe. (Credit: Illustris Collaboration)

A brainless, single-celled organism with a knack for finding food is helping astronomers study the largest, most mysterious structure in the universe — the cosmic web. But, first, things could get a bit slimy.

The cosmic web is a vast network of interconnected filaments made of dark matter and gas that forms the scaffolding the entire universe is built upon. These filaments can stretch hundreds of millions of light-years, and they connect galaxies, galaxy clusters and even galaxy superclusters. However, because the cosmic web is incredibly faint — and the dark matter within it doesn’t interact with light — it’s extremely difficult to map.

To tackle this challenge, researchers at the University of California, Santa Cruz, sifted through archived data for more than 37,000 galaxies before charting their positions in the sky. They then used a sophisticated algorithm to map out the invisible filaments of gas and dark matter between those galaxies to determine how they are interacting with each other, as well as how the cosmic web influences star formation in these galaxies.

But this wasn’t your average algorithm. Instead, the researchers used a model inspired by slime mold — specifically, the species Physarum polycephalum.

This algorithm mimics the mold’s food-seeking behavior, which sends out tendrils of reconnaissance mold to hunt for nearby food. If a specific mold thread stumbles on food, it thrives, creating a strong connection between the food and the rest of the colony.

So by substituting individual galaxies for the mold-based algorithm’s “food,” researchers were able to generate a 3D map that indicates how the galaxy-connecting filaments of the cosmic web are intertwined.

Incidentally, the gas between galaxies also acts as a kind of “cosmic food” that fuels star formation. And once you know how cosmic web filaments are connected to a galaxy, you can hazard a guess at the rate at which the galaxy is — or isn’t — forming stars. Such a prediction is based on whether or not a galaxy is connected to the cosmic web, as well as how tightly bound it is to other galaxies. If it’s connected too strongly, it runs the risk of drying up opportunities for star formation; too loosely, and it can’t get to enough fuel.

Researchers seeded an algorithm inspired by the food-seeking behavior of slime mold with the positions of about 37,000 galaxies, where the galaxies served as the “food.” This helped them model and create a 3D map of the cosmic web connecting these galaxies. Above, the galaxies (or food) are shown in yellow, while the cosmic web is shown in purple. (Credit: NASA/ESA/J. Burchett and O. Elek/UC Santa Cruz)

From Slime to Space

The idea to use a slime-based algorithm to map the cosmic web came from co-author Oskar Elek, a UC Santa Cruz computational media post-doc. He had previously seen the work of slime mold algorithms, so he urged Joe Burchett — an astronomer at UC Santa Cruz and lead author of the new paper — to apply it to his work on the cosmic web, whose structure remains elusive.

“He actually sent me screen shots of the data fitted with this final algorithm,” Burchett says. “What I saw was a trace of the reconstruction of the cosmic web that appealed much, much, much more to my intuitive sense of what the cosmic web should look like [compared with previous models].”

This isn’t the first time scientists have used slime molds to map various structures. Slime molds are expert filament builders, constructing complex underground networks that help them search for food and resources. These single-celled organisms work as one large colony that can be up to 1 foot in diameter. And, oddly, their filamentary structures show a propensity for what could be described as problem-solving.

Slime molds are adept at “shortest path” problems, such as finding the best way to weave through a maze to locate food hidden within. It’s been called “slime mold computing” before, and even likened to a rudimentary intelligence — though this obviously comes with its own subset of thorny questions.

“For a slime mold, the world is a combination of two fields: gradients of attractants [stuff it wants] and gradients of repellents [stuff it avoids],” Andrew Adamatzky, a professor in unconventional computing at the University of West England, wrote in an email. “The slime mold simply follows the gradients. This is how it calculates, for example, the shortest path.”

By tracking how the slime mold algorithm connected separate galaxies, researchers knew where to look for cosmic web filaments in archived observations. “Wherever we saw a filament in our model,” Burchett said in a statement, “the Hubble spectra showed a gas signal, and the signal got stronger toward the middle of filaments where the gas should be denser.” This means the researchers not only used the algorithm to effectively pinpoint where threads of the cosmic web should be, but also actually find them.

“For the first time now, we can quantify the density of the intergalactic medium from the remote outskirts of cosmic web filaments to the hot, dense interiors of galaxy clusters,” Burchett said. “These results not only confirm the structure of the cosmic web predicted by cosmological models, they also give us a way to improve our understanding of galaxy evolution by connecting it with the gas reservoirs out of which galaxies form.”

The new research was published March 10 in The Astrophysical Journal Letters.