Terrestrial plants may have caused the End-Devonian Extinction, but its origin is still shrouded in mystery. 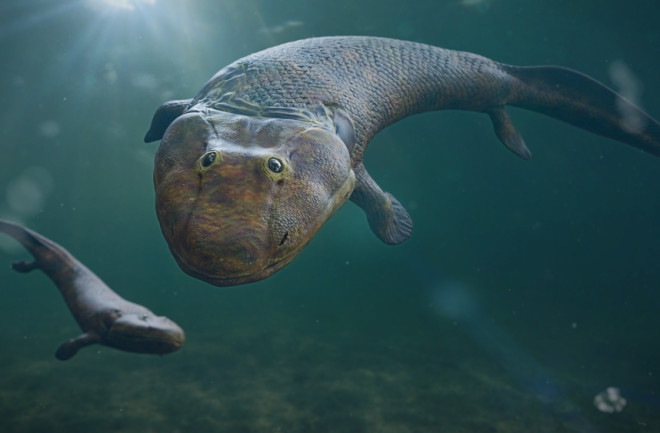 Life on earth reached a milestone during the Devonian period, 420 to 360 million years ago. For the first time, it became visible from space.

In the Silurian period that preceded the Devonian, most plants were confined to the oceans. The few that grew on land hugged the shore and grew only a couple of centimeters. Any tissues that strayed too far from the ground starved for lack of water and nutrients.

But, by the early Devonian, a select few plants had developed a work-around. Vascular tissues allowed them to actively move water and nutrients from one appendage to another. Eventually, these tissues gave rise to the first roots and leaves — innovations that allowed vascular plants to spread from marine shores up coastal deltas and into wetlands and floodplains.

Another kind of forest flourished on the ocean floor. Corrals, algae, cyanobacteria, mollusks, arthropods and fish thrived in reef ecosystems. While the Late Devonian Mass Extinction left forests unperturbed, disaster befell life in the ocean. Almost 73 million years after the late Ordovician mass extinction, or 375 million years ago, half of earth’s genera went extinct. The event may have lasted for as short as two million years, or as long as 20 million. Almost all its victims were marine organisms.

A Lack of Oxygen

Extended periods of marine anoxia — a lack of oxygen in the water — characterized the Late Devonian Mass Extinction. The two most pronounced periods are known as the Kellwasser event, which occurred around 372 million years ago, and the Hanenberg Crisis, which occurred at the end of the Devonian period, around 359 million years ago. Organisms on the bottom of the food chain, algae and bacteria, perished. Herbivores and predators followed suit.

The extinction also coincided with a climate-cooling period. As temperatures fell, so did global sea levels.

“The two leading theories are cooling and the spread of anoxia in the marine environment,” says Thomas Algeo, a geologist at the University of Cincinnati. “The fact of the matter is that they both occurred simultaneously, and they both may have played a role.”

One layer deeper, the story gets more complex. Scientists have long debated the cause of the anoxic and cooling conditions. One leading theory brings us back to the earth’s first terrestrial forests. As plants colonized the land, they changed the soil beneath them forever.

Through a process called “chemical weathering,” plants extract biologically useful nutrients from the ground. “Plants exude organic acids from their roots that break down mineral matter releasing certain ions that they then take up for the purpose of growth,” Algeo says.

Eventually, the plants died, decomposed and the biomass was flushed downstream towards the ocean. Algeo believes that this sudden increase in nutrients gave algae and cyanobacteria a competitive advantage. These organisms may have “bloomed” and consumed so much dissolved oxygen that the chemistry of the ocean shifted worldwide.

The proliferation of land plants might also explain the cooling temperatures. When plants respirate, a process as essential as breathing is to humans, they consume carbon dioxide and emit oxygen. At a large scale and over a long period of time, this lowers the concentration of CO2, the second most plentiful greenhouse gas on earth. Land plants may have cooled the earth significantly during the late Devonian just by breathing.

Plant-caused weathering and cooling is arguably the most compelling cause for the end-Devonian extinction, but scientists are still quite divided on the topic.

A second theory ties the extinction pulses to volcanic activity. Though it is hard to put a precise date on ancient eruptions, some evidence has suggested that a geologic layer of volcanic rock in Siberia could date back to the event. Widespread eruptions may have emitted sunlight-blocking ash, which acidified oceans and cooled the atmosphere. A third theory ties the extinction to a bolide impact like the one that wiped out the dinosaurs.

Unless someone can provide overwhelmingly compelling evidence otherwise, Algeo will stick to a plant-based explanation for the Late Devonian Mass Extinction.

“We have unambiguous evidence of volcanic influence in the End-Permian and End-Triassic, but all extinction events don’t fit a single model,” he says.

If Algeo is right, the End-Devonian event will share a unique characteristic with the current sixth mass extinction. Both have a biological, not geological, underlying trigger. Human-caused global warming, pollution and habitat destruction is propelling the current mass extinction, while plant-caused global cooling, pollution and habitat destruction may have initiated the End-Devonian.

“It’s important to try to understand the trajectory of events and how they ripple through the biosphere at large in order to try and prevent the worst effects of mass extinction in the future,” Algeo says.