Scientists have discovered that aircraft sometimes fly through powerful but unexplained radiation bursts. Now they think they know what is going on. 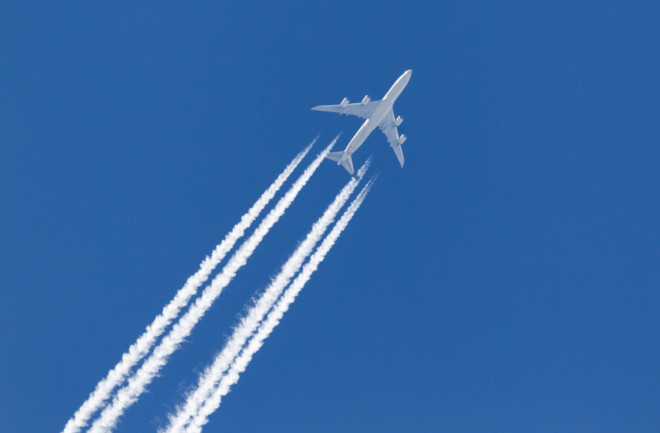 On 3 October 2015, a Gulfstream V research jet belonging to the National Science Foundation recorded a massive spike in atmospheric radiation while flying over the South Atlantic between Antarctica and the tip of South America. For 11 minutes, its on-board radiation detector watched as levels doubled, as if the aircraft had flown through a cloud of radiation.

That was not the only incident. Since 2013, airborne detectors have recorded 57 similar radiation bursts, each lasting between ten minutes and an hour.

The observations have raised significant questions, not least about the risks to aircrew and the safe operation of airborne electronics. But most of all, scientists want to know what causes these radiation bursts.

Today we have an answer thanks to the work of Kent Tobiska at Space Environment Technologies in California, and colleagues, who have studied the incidents and think they know the radiation source.

Their work raises important questions about the safety of frequent fliers such as aircrew and how to protect them from events that “are analogous to planes flying through radiation clouds,” say Tobiska and co.

Space scientists have long known that Earth is bombarded from space by a steady flux of high energy radiation from beyond the Solar System, called Galactic Cosmic Rays, and by more sporadic bursts from the Sun called Solar Energetic Particles. This radiation generally takes the form of high energy electrons, protons and alpha particles.

The Earth is protected from these particles by the Sun’s magnetic field, which slows down much of the incoming galactic radiation, and by its own magnetic field high above the atmosphere, which channels charged particles towards the poles.

However, high energy particles still get through to the upper atmosphere at about 100km where they collide with oxygen and nitrogen atoms creating lower energy electrons and photons that cascade in chain reactions into the lower atmosphere. These cascades reach a maximum intensity at altitudes of about 20 km but are steadily absorbed at lower altitudes by the thicker atmosphere.

Commercial aircraft operate at altitudes up to about 10 km and so experience a higher dose of this radiation than on the ground. The concern is that this kind of radiation can ionize atoms and rip apart DNA, potentially causing health problems such as cancer. It can also interfere with electronic instruments.

So any new source of ionizing radiation is a significant concern.

Although radiation is a well known issue at high altitudes for decades, there has been no attempt to monitor it continuously on a global scale. So in 2012, various US agencies began developing a real-time, global monitoring system to measure the levels. The system was called the Automated Radiation Measurements for Aerospace Safety (ARMAS) program and Tobiska’s company, Space Environment Technologies, has played a key role in it.

Since then, the program has taken hundreds of thousands of radiation measurements during 599 flights all over the globe.

It soon became clear that the background level of radiation isn’t constant at all. Instead, various monitoring aircraft experienced sudden rapid increases in radiation which would die away relatively quickly.

Tobiska and co focus their analysis on 57 events of this kind.

They first compared the radiation bursts to background readings elsewhere on the planet to rule out the possibility that a solar storm or an increase in galactic cosmic rays were to blame. They found no increase in activity elsewhere.

Clearly this radiation was being generated closer to home and only over small areas. Judging by the aircraft’s speed, these radiation patches cover areas no greater than 1000km in diameter.

The obvious culprit was Earth’s Van Allen radiation belts, the part of the magnetosphere that traps high energy charged particles creating a high-altitude ocean of plasma. Like any other ocean, this plasma is buffeted by environmental conditions — the space weather in the form of changes to the sun’s magnetic field and by solar storms.

This generates turbulence and sets up powerful plasma waves. It is these plasma waves, called electromagnetic ion cyclotron waves, that Tobiska and co think are the source of the radiation bursts.

That’s because charged particles can surf on electromagnetic ion cyclotron waves, becoming vastly accelerated. Any particles that escape do so as powerful bursts of high energy radiation. Indeed, plasma wave accelerators are an emerging technology for next generation particle colliders.

The team also found that the radiation spikes tended to coincide with periods of turbulent space weather, which promote conditions in which electromagnetic ion cyclotron waves can form. It’s also possible to see evidence of these waves from the ground.

“Evidence points to the [radiation] beam being produced at higher altitudes by incident relativistic electrons coming from the Van Allen radiation belts and that have been generated by electromagnetic ion cyclotron wave,” say Tobiska and co.

The consequences are significant. Over many years, scientists have calculated the background rates of high-altitude radiation and worked out safe limits on the time aircrew should spend in these conditions. This allows them to operate safely.

But this new source of radiation threatens to upend these calculations, particularly for those flying more northerly routes.

“The net effect on aircraft crew and frequent flyers for these routes will be an increase in the monthly and annual exposures, which may have career-limiting health consequences,” say Tobiska and co.

That conclusion is likely to send shockwaves through the aviation industry. The significance of this extra exposure has yet to be calculated but this work must be given the highest priority. At the very, this should be designed to give clarity to the many men and women who will be concerned about the effect of this radiation on their health.