Scientists say that the asteroid produced tsunamis that spread thousands of miles from the site of the initial impact. 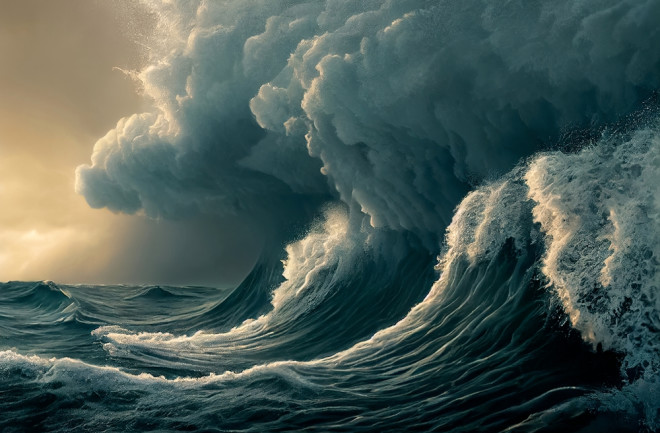 When the asteroid associated with the disappearance of the dinosaurs struck around 66 million years ago, its impacts was dramatic. Indeed, in addition to spewing ash and soot into the atmosphere, it also initiated a wave of some of the world’s worst tsunamis.

A new paper published in AGU Advances turns to a combination of computer simulations and sea sediments to fully demonstrate the power and the path of these tsunamis for the first time. According to the paper, the waves were much more potent and much more widespread than any others in recent memory, radiating all around the world’s oceans.

Though the theory that an asteroid collision contributed to the disappearance of the dinosaurs was widely disregarded when it was initially proposed in 1980, a stream of subsequent discoveries soon made the theory difficult to dismiss. In fact, in addition to the identification of a massive, 66-million-year-old crater along the coast of Mexico's Yucatán Peninsula, the discovery of substantial tsunami beds in the nearby seas seemed to solidify the theory in the minds of most scientists.

But, despite these indications that substantial tsunamis accompanied the asteroid, scientists have long struggled to determine just how destructive these waves were.

Using computer simulations, as well as sediment samples from about 120 geological sites from all around the world's oceans, one team of scientists finally determined the power and traced the path of these tsunamis. Involving as much as 30,000 times more energy in their initial impact than the worst tsunamis in modern memory, the team says that the waves were felt thousands and thousands of miles away from the site of the asteroid collision.

"This tsunami was strong enough to disturb and erode sediments in ocean basins halfway around the globe, leaving either a gap in the sedimentary records or a jumble of older sediments," says Molly Range, an author of the study and an oceanographer at the University of Michigan, in a press release.

The team first created a computer simulation of the impact and its immediate aftermath, including the creation of the impact crater and the start and spread of subsequent tsunamis. Constructing the simulation according to previous scholarship about the asteroid, the team programed the simulation to assume that the rock measured nearly nine miles across and moved at a speed of almost eight miles per second.

Even the energy involved in the second of these two waves was much more substantial than many modern-day tsunami, manifesting itself in a ring-shaped wall of outwardly moving water. Within one hour, the waves had radiated northeast into the North Atlantic. Within four hours, they had also rippled southwest into the South Pacific, traveling through the Central American Seaway that connected the Atlantic and Pacific Oceans many millions of years ago.

These two areas, the team says, bared the brunt of the damage. In addition to spawning walls of water at the surface of these oceans, the tsunamis also created violent underwater currents in the North Atlantic and South Pacific that were strong enough to erode the sediment of the seafloor.

The simulation states that within 24 hours of impact, the tsunamis had made their way through the majority of the Atlantic and the Pacific Oceans and had arrived in the Indian Ocean. Within 48 hours, these tsunamis waves had crashed against most of the world's coastlines.

"Depending on the geometries of the coast and the advancing waves, most coastal regions would be inundated and eroded to some extent," the study authors say according to a press release. "Any historically documented tsunamis pale in comparison with such global impact."

The team then studied the seafloor sediments from about 120 geological sites worldwide to confirm the results of their simulation. Concentrating on so-called "boundary sections" where sediment was deposited around the time of the impact, their study found substantial breaks and disruptions in the sediments of the North Atlantic and South Pacific Oceans. This strengthened the simulation's conclusions about the power and the path of the tsunamis.

"Marine sediments are consistent with our model results, which gives us more confidence in the model predictions," Range says in a press release.

According to the study authors, the destroyed sediments on the shores of New Zealand islands are particularly interesting, since they sit more than 7,500 miles away from the site of the initial asteroid impact.

"We feel these deposits are recording the effects of the impact tsunami, and this is perhaps the most telling confirmation of the global significance of this event," Range concludes in a press release.