The small, eel-like 'Paleospondylus gunni' fish has been a taxonomic troublemaker since its discovery in 1890. A recent paper proposes some answers about the prehistoric fish, with unexpected links to early tetrapod evolution. 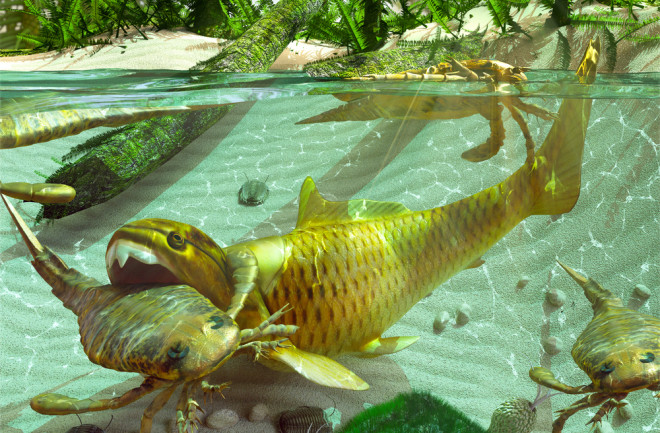 In the late 19th century, when Scottish physician and naturalist Ramsay Heatley Traquair first acquired specimens of a “strange little fossil vertebrate” from Achanarras Quarry in Caithness, Scotland, he likely had no idea that he would soon stumble on a mystery that would confound paleontologists for over a century.

“The comparatively few feet of rock exposed in this quarry afford a remarkable assemblage of fossil fishes,” he wrote in 1890. Among them was a tiny fish fossil that proved difficult to classify. He named it Paleospondylus gunni. Paleospondylus means ancient vertebrae in Greek, but gunni is an old Scottish term for a bugbear, or boogeyman. It’s been a boogeyman among paleontologists ever since (though often a dull one), with bizarre features that have defied easy classification.

But a team of researchers believe they’ve unmasked this mini mystery.

The Secret in the Skull

Tatsuya Hirasawa, an associate professor at the University of Tokyo, explains that despite being so difficult to classify, the miniature Devonian-era fish — from around 400 million years ago — is actually the most abundant vertebrate in the Achanarras fish bed: Thousands have been found since Traquair stumbled on them.

Nevertheless, it has unusual cranial features that have made it abundantly difficult to classify. “Usually vertebrates have a lower jaw that’s the same length as the upper jaw,” Hirasawa says. “But Paleospondylus has a shorter lower jaw.” Additionally, nobody has ever found teeth from this fish, despite fish fossils from the same era being found with teeth. The tiny fish are also missing something else rather important: fins.

Much of the previous investigative work has focused on the cranium area of Paleospondylus, because it’s so unusual. So Hirasawa and his team did the same, leveraging a modern form of X-ray, calledSynchrotron Radiation Micro-Computed Tomography (SR micro-CT).

One of the difficulties of studying fossils in general is delineating them from the surrounding rock. Much of the previous work on Paleospondylus somewhat sidestepped this issue by using fossils that had exposed craniums. The downside? Many of the skulls had been broken. The team had to find intact skulls to study, so they went looking for fossils that were totally encapsulated by rock. Out of 2,000, they found two that were sufficient.

Next, they had to separate rock from bone. The key advantage of the SR micro-CT system they used is that, unlike a conventional X-ray, where the radiation radiates out from a round bulb, all of the X-rays move through the fossil parallel to each other. Hirasawa explains that this allows the team to analyze the refraction of the X-rays to pick out the bone.

Two features in particular stood out, Hirasawa says. The first was the presence of an intracranial joint joining the two portions of the skull. “And on the bottom surface of the skull,” he says, “there was a large opening called the basicranial fenestra. And these two features correspond to the sarcopterygians,” or lobe-finned fish. More specifically, the team concluded Paleospondylus gunni was part of tetrapodomorpha, the clade that contains four-limbed vertebrates like us, and was a stem-tetrapod: one of the very first. Though it’s not the first effort to classify Paleospondylus, or even Hirasawa’s first, it differs in that “we identified skeletal compositions for the first time in Paleospondylus,” he says.

That we have another fishy ancestor is interesting enough. But the exact placement of the bugbear in the Devonian period has even more interesting implications, Hirasawa says.

An Unexpected Evolution in the Earliest Tetrapods

Its lack of limbs, teeth and cranial dermal bones suggest two possible explanations: either that those elements were lost in the course of evolution towards this species, or, that the fossils they examined were of larval Paleospondylus, which hadn’t yet developed them. Either way, Hirasawa says, that means the fish represents heterochronic evolution, a very important step in vertebrate evolution, where different features of the organism started developing at different rates.

The fossil record of post-Devonian tetrapods demonstrates pretty clearly, he says, that the common ancestor of modern tetrapods had a larval stage with external gills, meaning it would have developed in two distinct stages, like a tadpole and frog. But Eusthenopteron foordi, another stem tetrapod that comes after Paleospondylus, had paired fins and cranial development even in juveniles. This means that, at some point, tetrapods evolved to separate stages of development: Instead of everything developing at the same time, different features would develop at different rates.

A Lack of Limbs that Leads to Limbs

Paleospondylus’ taxonomic placement as a stem tetrapod earlier than Eusthenopteron makes this all the more intriguing. As the authors write: “This heterochronic evolution at the root of the limb-bearing tetrapods might have facilitated the establishment of evolutionary novelties, including the limbs, by separating developmental modules.” If features can evolve at different rates, they can rapidly change shape and, thereby, function, as with Darwin’s finches.

“At a certain point over the evolution of tetrapods,” Hirasawa says, “our ancestors acquired a larval stage. And in our hypothesis, Paleospondylus represents [some] of the earliest evidence for [the] evolutionary origin of larva-like development.”