What Was the Most Dangerous Carnivorous Dinosaur?

Deciding which carnivorous dinosaur was the most dangerous between the Tyrannosaurus rex, Velociraptor and Spinosaurus, is more complicated than you think. 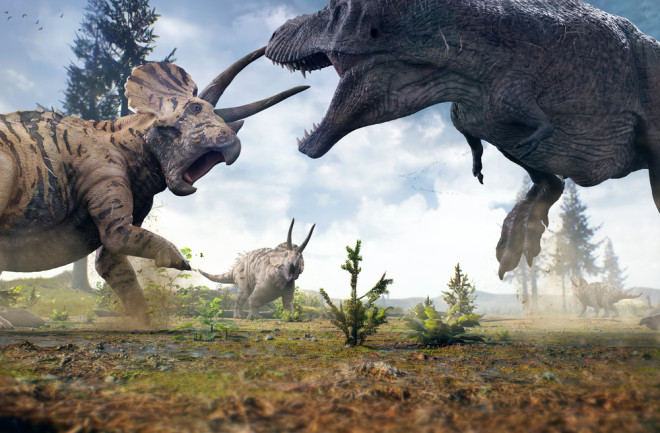 Movies like the Jurassic Park franchise and TV shows like Jurassic Fight Club pit the Tyrannosaurus rex against the Velociraptor and invite us to ask, “Who would win?”

But most paleontologists don’t ask this question — they’re usually more concerned about the bigger picture. How did these animals evolve and what roles did they play in their ecosystems? As researchers attempt to piece together the lives of animals that lived tens and even hundreds of millions of years ago, they unearth ever-more tantalizing clues about some of the largest, most powerful predators to walk the Earth.

Just about all carnivore dinosaurs, from the two-pound Microraptor to nine-ton T. rex, belong to the same group: the mostly two-legged, three-toed theropods. Not all theropods were carnivores. For instance, the Freddy Kreuger-like Therizinosaurus, despite its fearsome appearance, used its huge claws to snag leaves to eat. And one sub-group of theropod dinosaurs is still alive today: birds.

All theropods evolved from one common ancestor, but over tens of millions of years and thousands of miles of territory, they diverged in surprising — and sometimes terrifying — ways.

Is T. Rex the Reigning Champion?

The shoo-in for “most ferocious dinosaur” is also arguably the most popular: T. rex. But does it live up to the hype?

“I think so. I think it sort of depends on the hype,” says Tom Cullen, a paleontologist at Carleton University in Ottawa. “I think in a lot of people's minds, big theropod dinosaurs, like T. rex or what have you, are basically monsters,” but they were just animals that probably spent a fair bit of time resting and trying to stay alive — no real creature could truly live up to Hollywood’s image.

That said, T. rex had the strongest bite force of any land animal known, even though the ancient shark Megalodon had an even more powerful chomp. It used those jaws to not only tear flesh, but also crush bone — fossilized T. rex poop is full of bone fragments.

T. rex was also just plain big — at 40 feet from snout to tail, and heavier than an elephant. If you look at a photo of a T. rex skeleton from above, Cullen says, “it becomes very clear just how bulky and heavy and strong of an animal that T. rex was.”

And while it couldn’t necessarily chase down a Jeep, like in Jurassic Park, its eyesight was “almost certainly better than ours,” says Cullen. Standing still to evade a T. rex wouldn't save you.

The T. rex is hardly the only ferocious dinosaur out there. Modern-day South America and Africa were home to groups called the carcharodontosaurids and the abelisaurids, which could reach similar sizes to the T. rex.

“The abelisaurids have short-faced skulls, with frontal bones frequently thickened and ornamented with protuberances or even horns,” says Juan Ignacio Canale, a paleontologist at the Argentine research agency CONICET and the Ernesto Bachmann Paleontological Museum. “The carcharodontosaurids show long skulls with profusely ornamented bones with crests, furrows, and low protuberances all over the facial bones.”

In 2022, Canale described one of the biggest predatory dinosaurs ever found in South America, Meraxes gigas. It’s named after one of the dragons from the show Game of Thrones and the book series A Song of Ice and Fire. While only distantly related to T. rex, it too had puny forelimbs. Canale and his colleagues found that in many big theropods, big heads and little arms go hand in hand.

“Probably, the predatory functions performed by the arms in more primitive representatives were gradually carried out by the head in giant and more derived species, like Meraxes or Tyrannosaurus,” says Canale.

While Meraxes has many similarities to T. rex, predatory dinosaurs in other parts of the world break that mold.

“We have a very biased view of the world of dinosaurs,” says Nizar Ibrahim, a paleontologist at the University of Portsmouth in the U.K. “We often assume that predatory dinosaurs and dinosaur ecosystems from other parts of the world simply replicate what we see in North America, and that's just not the case.”

Ibrahim has studied the northern African superpredator Spinosaurus, which is decidedly different from North America’s dinosaurs. “Every part of its anatomy is different and bizarre,” Ibrahim says. “But then when you piece it all together, it all makes sense.”

Spinosaurus’s narrow, croc-like jaws were optimized to snap shut underwater with little resistance. Its hind limbs are shorter, like in an early whale, and its tail looks like a giant paddle. But the kicker to determining that Spinosaurus was an aquatic predator was its dense, heavy bones. In a 2022 study, Ibrahim helped show that Spinosaurus’s bones were unusually dense, a trait that animals ranging from hippos to penguins shared. Dense bones help them submerge themselves underwater.

“This thing comes out as a diver,” says Ibrahim. “This is not an animal that was kind of toying with the idea of maybe snatching fish like the heron. This is an animal that spent a huge amount of time in the water submerged, actively pursuing prey underwater.”

Not only is the Spinosaurus an example of an aquatic predatory dinosaur, it is also the longest theropod. It wasn’t as bulky as T. rex, but its length has been estimated at nearly 60 feet — around the length of a semi-truck.

Not all fearsome theropods were huge, though. Velociraptor was much smaller than portrayed in Jurassic Park, closer to the size of a turkey; its larger cousin Deinonychus was closer to Hollywood Velociraptor proportions. Velociraptor was “not really in the same league” as top predators like T. rex and Spinosaurus, says Cullen. They were “smarter and smaller, but still pretty fearsome.”

While there’s not much hard evidence that raptors were pack hunters, like in Jurassic Park, they were plenty ferocious on their own: A famous fossil shows a Velociraptor locked in combat with a much-larger Protoceratops.

And while even the largest raptors, like 18-foot-long, 660-pound Utahaptor, were far smaller than a T. rex, “if you've ever stood in front of a Deinonychus skeleton or a Utahraptor skeleton, those teeth and those claws — this would have been a really menacing animal. You really wouldn't want to meet that one in a dark alley,” says Ibrahim.

Predators Weren’t the Only Danger

We’re often interested in the dinosaurs that could have eaten us, but even the smallest predators evolved to catch whatever they needed to. “It really depends on your perspective,” Ibrahim says.

Overall, the question of which dinosaur “would win in a bare-knuckle brawl,” isn’t as interesting to Cullen, “because it reduces them to a caricature.” Studying T. rex is rewarding not because T. rex was ferocious, he says, but because of “all the really interesting ways we can apply modern scientific techniques to understand the life and growth and ecology and evolution of an animal that was alive 66 to 67 million years ago.”

Not to mention, if we somehow found ourselves face-to-face with a dinosaur, the predators weren’t the only ones that could pose a threat.

“I think that's something that we often forget: Some of the most dangerous animals out there are herbivorous animals, like Cape Buffalo and hippos,” says Ibrahim. “There are a lot of theropods I'd rather face rather than facing an angry Triceratops.”

This Pterosaur Had at Least 480 Hooked Teeth