Combatting Fast Fashion: How Compostable Clothing Can Help The Environment

A slate of brands are marketing clothing that they say can break down in your backyard. 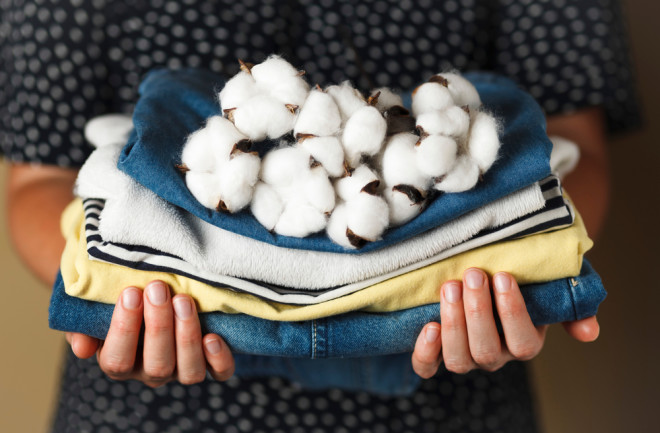 When Katie Lopes set out to create a women’s underwear brand, she wanted her products to be comfortable and hip — and eventually disappear into a pile of coffee grounds, eggshells and potato peels in her garden.

“I was beginning to become more aware of the damage the fashion industry was doing to the planet, so it would have been irresponsible not to take this information into account,” says Lopes, who founded Stripe & Stare, an intimate apparel brand, in 2017. Lopes says she chose to focus on underwear because so few people feel comfortable buying it second-hand. “Producing it right and avoiding the landfill was very important,” she says.

Stripe & Stare is among a growing number of clothing brands, including H&M and Stella McCartney, marketing biodegradable clothing that they say can be disposed of in a compost bin.

The fashion industry accounts for up to 8 percent of global carbon dioxide emissions, according to the United Nations Environment Programme. That’s more than global shipping and air travel combined. Most of those clothes — about 84 percent — end up in landfills or incinerators. In the United States alone, more than 11 million tons of textile waste ended up in landfills in 2018, according to the Environmental Protection Agency’s most recent data.

It doesn’t have to be that way, says Natalie Patricia, the founder of Harvest & Mill, whose clothes are made entirely from U.S.-sourced organic cotton. "Organic cotton is a plant grown on a farm just like our food is. And so it can and should be composted and returned to the soil," Patricia says.

Composting refers to the process of recycling organic matter — in most households, that means food scraps and yard waste, like leaves — into fertilizer. Because composting is an aerobic process, it does not produce methane, a potent greenhouse gas that organic materials emit when they decompose in oxygen-starved landfills.

However, it’s not enough for the fabric to simply be made from natural fibers, such as cotton, silk and wool, to compost it. Many brands treat their clothing with so-called forever chemicals to make them waterproof or stain- or wrinkle-resistant.

"There are a lot of brands out there who say they’re compostable, but they just mean they're using cotton or linen or hemp. Their dyes, the seams of every piece aren't [compostable]," says Katherine Quigley, whose company, Sustain, uses all plant-based dyes.

To make her line fully compostable, she had to work with manufacturers who agreed to use cotton sewing thread. "They all want to use polyester, which just means – unless you're cutting out every seam – it's not compostable," she says.

But even if every last seam is made from organic material, few composting facilities take textile waste. It is difficult to verify the fabric content and they can't risk contamination, said Paul Foulkes-Arellano, founder of Circuthon, a management consultancy that helps businesses transition to circular economies.

"They do not want fabrics. They do not want compostable footwear. They don't want anything to do with the fashion industry because they are set up for packaging and food," he says.

Foulkes-Arellano, who is based in London and has studied textile disposal systems in Europe, said for composting to make a meaningful difference, it would need to be at a large scale, like at the government level — not at a brand level.  “Unless a brand guarantees to collect all its own garments it's wishful thinking,”  he says.

Patricia, of Harvest & Mill, says her company is working with the nonprofit Fibershed to test composting conditions with municipal and private facilities in California. If they’re able to get those facilities on board, Patricia says it would allow Harvest & Mill to create a composting "take-back” program.

Even if you compost in your backyard, there's still the question of if you want to risk composting fabric, and whether it would help your flowers bloom or your lettuce grow.

"There are very few pieces of clothing that can be safely composted,” says Alden Wicker, author of the forthcoming book To Dye For: How Toxic Fashion is Making Us Sick. She says that when clothing decomposes, it risks leaching toxic dyes and finishes into the soil.

Adopting universal compost standards for textile waste could be one way to help consumers safely dispose of old clothes, she said, but until then, “I would never recommend someone put it in their backyard compost, especially for amending soil to grow food."

Foulkes-Arellano says he sees more promise in textile recycling. "I believe in keeping things going around the loop, and we now know cotton can be recycled," says Foulkes-Arellano.

In Sweden, a textile recycling company recently adapted a massive paper factory to process clothing. “We can now put jeans, cotton t-shirts, cotton socks into this converted paper factory and out the other side comes new cotton textile," he says. Only about 15 percent of clothing in the U.S. is recycled, according to the EPA, but Foulkes-Arellano says the factory in Sweden might portend wider-spread adoption of textile recycling.

Of course, the amount of clothing being recycled, composted or, more often, sent to the landfill points to the bigger problem: there’s simply too much of it being produced.

A 2016 World Economic Forum report estimated 150 billion new garments are created each year. The number of clothing items produced each year doubled between 2000 and 2014, according to the consulting firm McKinsey. And it’s not just harmful to the environment: All that clothing production requires cheap, mostly unregulated labor. It’s estimated that 98 percent of fast fashion factory workers don’t make a living wage.

“What we need to do is just get away from this idea that clothing is disposable," says Quigley. "If you look back, even to the first half of the 20th century, wardrobes were a fifth of our size, but they were paying more,” and the items lasted much longer.

A cotton t-shirt from Sustain costs around $48, or about twice as much as a similar shirt from the Gap. Quigley says she believes new government policies could even the playing field between fast-fashion brands and companies like hers. She supports higher taxes on high-polluting fast fashion companies or incentives for companies to manufacture domestically.

"One thing that could really help is if the government started making clothing companies responsible for the full life cycle of their clothing,”  Quigley says. “If a piece of polyester clothing actually incorporated the cost of what it takes to recycle or clean up the end-life of that clothing, it would inevitably cost more.”

When consumers pay $56 for a t-shirt from Stripe & Stare, Lopes’ brand, they’re paying for carbon offsets, high labor standards and state-of-the-art, biodegradable materials, she says. Consumers might not like paying more, Lopes concedes. But, she adds, “we try really hard to support the idea of buying less and buying it better.”