The new research suggests that drinking high amounts of alcohol accelerates biological aging, while low levels of alcohol seem to have no effect. 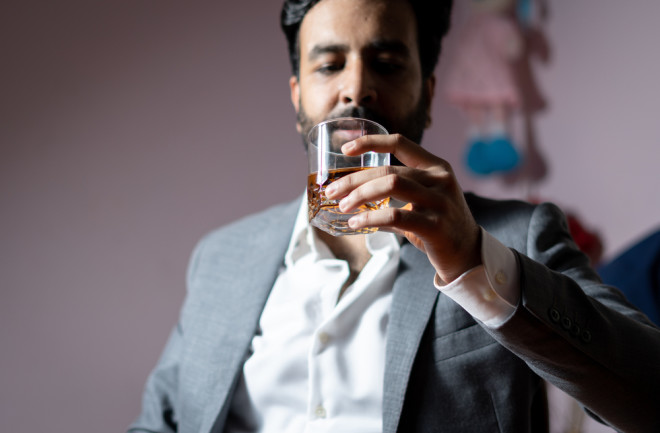 Drinking alcohol directly accelerates biological aging, according to the largest ever study on the impacts of alcohol on DNA.

Researchers at Oxford University discovered that high alcohol consumption increased biological aging by up to six years — suggesting that cutting down on drinking could significantly reduce the risk of age-related diseases such as Alzheimer’s and cancer.

The results, published this week in the journal Molecular Psychiatry, also suggest that consuming low amounts of alcohol does not cause aging to accelerate. Rather, the damage seems to begin after a surprisingly high amount is consumed.

The Impact on DNA

Previous studies on the impact of alcohol consumption on DNA had suggested that drinking causes the shortening of telomeres — a biological marker for aging. But it has been difficult for researchers to collate the findings of multiple, international studies and untangle whether it was alcohol itself accelerating aging or associated factors, such as socioeconomic status.

The study looked at the genetics of nearly a quarter of a million people in the U.K., focusing on telomeres, the protective cap at the end of chromosomes. Telomeres stop damage to DNA during cell division but get shorter every time, offering less protection. Eventually they are so degraded that the cell dies as it can no longer divide.

Studies have linked shorter telomeres to diseases such as Alzheimer’s, cancer and cardiovascular disease, which become more prevalent in people as they age. Some studies have suggested that telomere length could even be a better predictor of lifespan than chronological age.

Telomeres shorten naturally as we get older but unhealthy lifestyle habits like poor diet, smoking and drinking alcohol seem to speed up the process.

The Oxford researchers studied genetic markers in the samples and asked the participants how much they drank to determine their alcohol consumption before comparing the lengths of their telomeres. The results suggest that low level alcohol consumption does not speed up biological aging.

There was no detectable additional damage to the DNA of those who consumed less than 17 units a week — where 20 units equals two 750ml bottles of wine (or, 25.4 ounces) at 13.5 percent alcohol content. This suggests “a necessary minimum amount of alcohol consumption is required to damage telomeres,” according to the authors.

Previous studies have also concluded that alcohol only begins to significantly damage health after a threshold is surpassed, rather than increasing uniformly with every drink consumed. After the 17-unit threshold is met, however, DNA starts to degrade quickly with each extra alcoholic beverage.Those who consumed 32 units of alcohol a week, for example, were three years older biologically than someone who drank 10.

The findings suggest that even small drops in consumption in the biggest alcohol drinkers could significantly lower their health risks, as there is a strong correlation between cellular aging and debilitating or fatal diseases in later life.

“Our results provide another piece of information for clinicians and patients seeking to reduce the harmful effects of excess alcohol,” says Anya Topiwala, a psychiatrist at the University of Oxford and lead author of the new paper.

Individuals who had been diagnosed with an alcohol-use disorder showed between three and six additional years of age-related change compared to those who had not received that diagnosis. The increases in aging did not slow as alcohol intake increased.

Harmful use of alcohol is a causal factor in more than 200 disease and injury conditions, according to the World Health Organization, and the toxin causes 5 percent of all deaths each year.

Researchers are not entirely sure how alcohol accelerates aging as drinking has myriad negative effects on the body, from dehydration to neurological changes in the brain and damage to vital organs such as the liver. The most likely suspect, according to the study’s co-authors, is acetaldehyde — a toxic side product of breaking down ethanol. Acetaldehyde damages DNA and reduces the levels of antioxidant compounds that protect against oxidative stress.

No causal link was established between alcohol consumption and telomere shortening, but the study makes strong observational suggestions. Accelerated telomere shrinkage was only found in those who drink and not in those who had drunk previously or never at all. And the alcohol metabolism gene, AD1HB, was the strongest genetic predictor of telomere length.

Though the study did not compare the impact of binge drinking with spreading out alcohol consumption over the week, Topiwala expects the latter causes more aging as alcohol addicts were the most affected. Studies of the brain structure of alcoholics have also found similar results.

“Certainly, dose is important,” says Topiwala, who specializes in the neurobiology of aging.

The study “shows clear links between consuming alcohol and aging, and points towards a possible link between alcohol and Alzheimer’s,” says Richard Piper, Chief Executive of Alcohol Change UK, who did not participate in the study. “In general, there is an ever-larger body of science showing how, exactly, alcohol causes so much ill-health and so many early deaths.

Is 'Expired' Milk Safe to Drink? Here's How to Know When to Throw Away Food