Debunking Myths Around Predicting the Sex of Your Baby

There are many old wives’ tales that say what the sex of your baby could be, but science has proven most wrong. 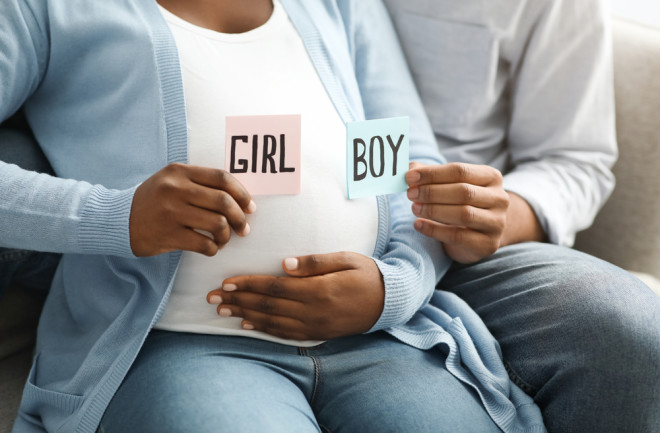 There's a good chance that somewhere in the world, someone is telling a pregnant woman that she’s going to have a boy, or a girl, based on how she appears. In the U.S., some favorites are, “You’re carrying low, so it must be a boy,” or, “You don’t have morning sickness? It must be a girl.”

Buzzfeed even has a quiz to help determine if you are going to have a boy, or girl, based on the decorations and cake you’ve chosen for your baby shower. It goes without saying, this is not based on a scientific study.

And, for those who haven’t yet conceived, there are myths about how to prepare the sperm and even the vagina, so you have a boy, or a girl. If you have a boy and you want a girl, or vice versa, and your male partner wears briefs, it’s common to recommend switching to boxers. Or, the other way around, boxer wearers should switch to briefs.

There are some who say it’s all about whether the female has an orgasm and if it comes before or after the male’s orgasm. And, of course, there’s a lot of murmuring about sexual positions — some are “better” at helping you conceive a boy, and some are better for a girl.

The fact is, none of these old wives tails or medical gimmicks guarantee to help you determine the sex of your future child. The bottom line is as follows: If the male’s sperm that fertilizes the female’s egg has an X chromosome, the baby will be a girl. If the sperm has a Y chromosome, it will be a boy, according to Drs. Yvonne Bohn, Allison Hill and Alane Park in an interview with NPR.

Below, we’ve debunked the myths around guessing your baby’s sex. But, before we get started, it’s important to note the difference between gender and sex. While many expectant couples have gender reveal parties, the term is incorrect. That’s because “gender” refers to a person’s identity, not necessarily their biology. And “sex” refers to person’s biology.

Myth: The longer it takes you to get pregnant, the more likely it’s a boy

That is, women who take longer to conceive may be more likely to have thicker cervical mucus. That is especially advantageous to a Y chromosome, though it’s not clear yet why that is. While there have been many hypotheses dating back decades about why, none have been proven.

One from the 1960s suggests that sperm with Y chromosomes have less DNA, which allows them to swim faster in viscous liquids. However, as popular as this hypothesis has become, numerous studies have shown that there is no shape or size differences between X and Y sperm. That, in turn, means there’s no difference between how capable an X or Y sperm is at swimming, or even how much more robust one is. Or, how much longer one can live than the other.

This is not a fact, nor is there any scientific evidence to prove the hypothesis. Like the previous myth, this concept is based on sperm speed and sperm hardiness, or robustness. Specifically, this myth suggests that sex closer to ovulation will result in a boy because Y sperm (boy sperm) swim faster than X sperm (girl sperm), but X sperm are hardier.

Myth: Certain sexual positions will result in a girl and others will help you conceive a boy

The myth suggests that deeper penetration allows for boy sperm to get a running start, and reach the egg faster.

This same theory suggests that if you want a girl, less deep penetration gives girl sperm a greater chance to get to the egg. The erroneous theory is as follows: Because X sperm are more robust, they will outlive the boy sperm on the collective sperms’ journey to the egg. When it takes longer to get there, only the girl sperm will make it to the waiting egg.

Myth: Changing the Ph of the vagina

There’s a myth that eating alkaline foods prepares the female reproductive system to be more friendly to Y sperm and acidic foods make for a more X-friendly environment.

Diet cannot dictate the sex of your child. So, if you eat a high sodium, high calcium diet along with eggs, yogurt and chocolate, do it because that’s what you like to eat, not because you want a girl. And, if you love red meat, salty foods and potassium-rich foods, like bananas, it will not increase the odds that you’ll conceive a boy.

Myth: The timing of a female orgasm

There’s an unproven hypothesis about the timing of a woman’s orgasm and the kind of environment that results. This myth is predicated on the unproven theory that Y sperm are healthier and stronger in an alkaline environment and X sperm are more robust in an acidic one. After a woman has an orgasm, the vagina is more alkaline. Without an orgasm, the environment remains slightly acidic.

Myth: Heartbeat as an indicator of sex

Do not avert your eyes during an ultrasound appointment out of fear that the speed of the fetus’s heartbeat will reveal its sex. This is not the case. While an ultrasound can measure the fetal heart rate, which ranges from 110 to 160 beats per minute, how fast or slow a fetus’s heart beats is not a sex indicator. Some fetuses have slower heart rates and some faster, but it reveals nothing about the sex.

Myth: Do not buy a kit

There are companies that claim they have the secret formula for helping you increase your chances of conceiving one sex or the other. Do not buy these kits. Experts say the science behind them is unproven. The kits claim that if you alter the environment in the vagina, take nutritional supplements and use douches, you can make your body more X or Y sperm receptive.