Mixing Weed And Alcohol? Crossfading Does This To Your Body

When you're drunk and high at the same time, you could be in for double trouble. Here's what you should know about how alcohol and cannabis interact. 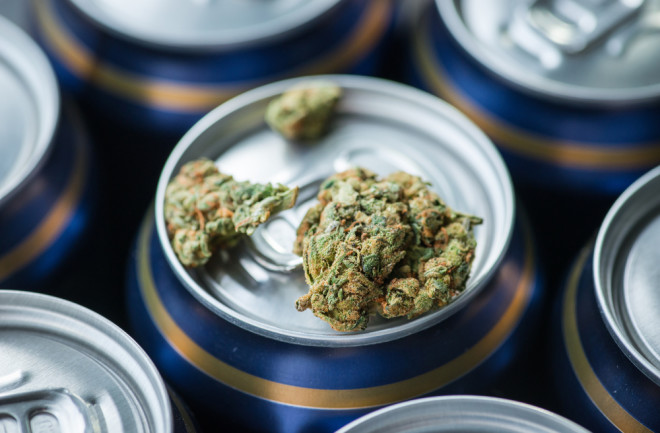 This article was originally published on April 27, 2021.

Marijuana isn’t a drug you secretly use at parties anymore, thanks to increasing legalization. And like marijuana, alcohol can also cause feelings of relaxation, get rid of social inhibitions and make you feel downright giddy.

While alcohol and cannabis affect the brain differently, they share a similar target called the dopamine reward system. The release of dopamine helps achieve a pleasurable drug experience and increases reinforcement behavior to do it again in the future, explains Joseph R. Volpicelli, medical director of the Volpicelli Center, an addiction treatment facility in Pennsylvania. So, it shouldn’t come as a surprise that drinking and smoking simultaneously, otherwise known as crossfading, is a common practice.

When it comes to health and safety, are you setting yourself up for double trouble or enhancing your drug experience when mixing the two? Science shows that the answer boils down to how often you crossfade and which drug you use first.

If you decide to knock back a beer before smoking, it might make you feel higher than just using weed by itself. “Booze before weed gets you higher indeed,” explains James Giordano, a professor of neurology and biochemistry at Georgetown University Medical Center. Any type of alcohol — whether it’s wine, beer, or a shot — increases the absorption of THC in cannabis products by priming liver enzymes.

Alcohol changes how other body parts absorb THC as well. “Alcohol relaxes smooth muscle, so the arteries relax, which increases blood flow to many parts of the body. When you inhale marijuana, it crosses the barrier between the lung and the blood vessels,” explains Volpicelli. “Because there’s more blood flowing to the lungs, marijuana gets absorbed faster and more efficiently.”

Giordano says drinking before smoking may also make it easier for drugs to enter the brain — although further research is needed. A 2020 review in Frontiers in Neuroscience reported excessive alcohol use or alcohol dependency could compromise the blood brain barrier, which prevents harmful chemicals or drugs from entering the brain.

And because of the way alcohol increases THC absorption, you’ll need less cannabis to get you on the road to stonerville. For the experienced cannabis user, a drink or two might seem like a wonderful shortcut to getting higher than a kite. But if you’re a greenhorn, you’ll need to watch out for the green out.

Greening out happens when a person feels sick after consuming too much pot. Giordano says this occurs because cannabinoid receptors in the brain become flooded with THC, causing a system overload and a mild toxicity effect. While not life-threatening, the experience is not fun. Your body switches back and forth between the parasympathetic and sympathetic nervous system, leaving you with chills, cold sweats, nausea, dizziness and repeated vomiting. Giordano’s advice: start slow and start low. And when in doubt, make sure you have access to a bathroom.

“Weed before drink, you had more than you think,” says Giordano. THC can change how alcohol is metabolized in the body by pulling alcohol more slowly out of your GI tract. Alcohol can also affect the brain, making it harder to discern whether you had too much to drink.

Giordano says a great rule of thumb is that if you decide to smoke first, you should drink less than you usually would because of alcohol’s delayed effect. “If two drinks get your buzz on, three drinks get you loaded then four drinks may get you plastered. But if you have weed on board, two drinks do nothing and three drinks will only give you mild buzz,” he says. “You’re still going to get loaded on the third and fourth drink, and it's just going to hit you later.”

Both Girodano and Volpicelli agree weed and alcohol can be safe to consume together when people take precautions to mitigate risk. One way is to stay hydrated.

And if you get sick from smoking first and then drinking, the likelihood of vomiting is very low because weed also works as an antiemetic. “The ability to purge is decreased, which can lead to toxicity problems with regard to getting rid of the alcohol,” Giordano says.

Limiting the amount of alcohol consumed when crossfading could also help. Volpicelli says cannabis use can temporarily impair short-term memory, but chronic marijuana use lessens this over time because your body begins tolerating the effect. But when you throw alcohol into the mix, the memory deficits can return and come back even stronger.

By itself, excessive drinking increases the risk for alcohol dependency or alcoholism and has been linked to liver damage, kidney damage, heart problems and cognitive impairments. Volpicelli says women are more susceptible than men to alcohol's physical effects.

Excessive cannabis use also comes with its own set of problems, including tolerance and dependence. Higher tolerance can lead to increasing the dose and potentially using unsafe amounts to get the same high. And if you prefer smoking marijuana, there’s always a risk for lung damage over time. The American Lung Association says cannabis smokers are at a greater risk of tar exposure because they inhale deeply and hold their breath for longer than cigarette smokers.

It’s hard to quantify the long-term health effects of crossfading when there’s limited marijuana research on humans. One 2019 study published in Substance Use & Misuse did find college students who reported frequent crossfading had increased risk for heavier drug use. But Giordano argues that anecdotal accounts of cannabis use aren’t the most reliable because street products aren’t regulated and can vary in drug concentration.

Legalizing marijuana may help researchers better understand health effects because its quality, purity, and reliability of purchase from a reputable distributor will likely increase. “Take a look at cigarettes. The profundity of cigarettes’ health impact was really only gained as a consequence of longitudinal studies over the years,” Giordano says.

Some health benefits of cannabis use are starting to emerge in the scientific record. A 2015 animal study in Free Radical Biology and Medicine found cannabidiol could protect the liver from damage caused by binge drinking. “We don’t have much research, but from animal studies, marijuana may have anti-inflammatory effects,” says Volpicelli. “Marijuana can have beneficial effects in helping to suppress liver inflammation and longtime liver disease.”

The bottom line is whether you’re a veteran drug user or curious about trying, the best thing you can do is to start slow and start low. Knowing yourself and taking your precautions can minimize health risks and maximize the crossfading experience.