Beyond the fictional 'Alice in Wonderland' Mad Hatter, plenty of real-life hatmakers lived with neurological challenges. Modern knowledge about the tools of their trade explains mercury poisoning was behind their craft and odd behavior. 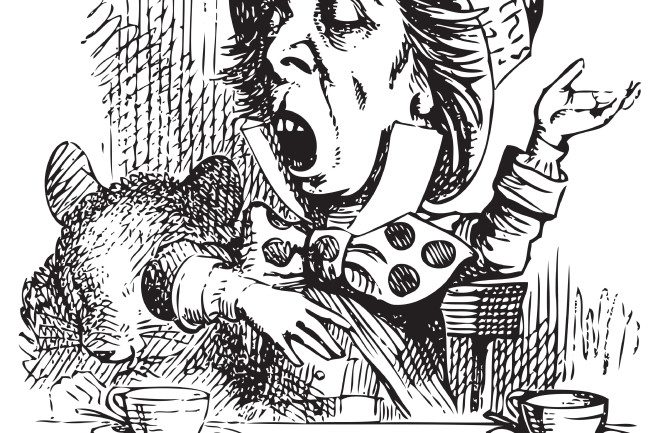 You may remember the Hatter from Alice’s Adventures in Wonderland, the 1865 book by Lewis Carroll, the pen name of Charles Dodgson. When Alice encounters the Hatter at a tea party, he continually interrupts her, and finally exasperates her with his bizarre logic and increasing hostility, leaving Alice “dreadfully puzzled.” After some time, she gives up and stomps away from “the stupidest tea-party I ever was at in all my life!”

Critics and history suggest that Dodgson’s fictional Hatter may have been inspired by a non-fictional, real-life person. One candidate, according to The Annotated Alice by Martin Gardner, polymath and popularizer of mathematics, is Oxford furniture dealer Theophilus Carter, who was said to wear a top hat all the time. Carter, whom Dodgson probably knew (since Dodgson lived and taught at Oxford University), was regarded locally as the Mad Hatter, most likely because of his eccentric ideas.

Case in point: Carter was known to have invented an “alarm-clock bed” that dumped a sleeper onto the floor when it was time to get up, according to Gardner in The Annotated Alice.

He also had a reputation for rude behavior. It seems he was not unlike the character who tormented Alice at the tea party. Another contender who might have provided inspiration for the Hatter is Samuel Ogden, as mentioned in Gardner’s More Annotated Alice. Ogden was indeed a hatter in Manchester, and was known at the time as “Mad Sam.”

Suffice to say, there are multiple historical accounts of hat makers who were thought to be mad, and plenty of instances of unusual people being referred to as “mad as a hatter.”

Beyond the metaphor, Victorian-age hatters really did tend to face neurological challenges, including tremors, slurred speech and irritability. But it wasn’t madness; it was poison.

Throughout the 19th century, before industrial safety standards, hatmakers used mercurous nitrate, a form of mercury, to cure the felt used in hats. Though it wasn’t known then, mercury is a neurotoxin.

After years of inhaling vapors from the mercury, hatmakers would begin to exhibit some very bizarre and disturbing symptoms. In its early stages, mercury poisoning shows up as rashes, muscle pain, digestive issues and mouth sores. In other words, it entailed a loose assortment of symptoms that might well have gone unremarked by anyone other than those suffering them, and it did not resemble insanity.

After long-term exposure to mercury vapors, however, the symptoms become more severe, veering in a neurological direction. These can range from irritability and tremors to jerky movements, memory problems, difficulty concentrating and, in extreme cases, psychosis or hallucinations.

The side effects and toxicity of mercury exposure were only identified around the 1950s, centuries after hatmakers and plenty of other researchers began working with the compound. In fact, historical accounts show that Sir Isaac Newton, Blaise Pascal and many other famous scientists suffered from mercury poisoning.

Still, even today, chronic mercury poisoning is sometimes called Mad Hatter’s Disease. Thanks to better diagnoses and more rigorous public health and occupational safety standards, the disease in its extreme form is rare. But, plenty of earlier hatters and scientists paid a real price, driven mad by the tools of their trade.

These unfortunate artisans serve as a cautionary tale not only about the hazards of chemical exposure, but the danger of labeling someone mad before we know the details of what ailments they might be facing.

Here's How Cooking Fumes Can Harm Your Health

A Brief History of Champagne: Were Those Bubbles an Accident?

More From Discover
Technology
What Is a Social Media Cleanse?
Mind
Calming Kids With Electronics May Affect Emotion Regulation Skills
Mind
What Psilocybin Psychedelic Mushrooms Are Teaching Us About Human Consciousness
Mind
How Failing Could Actually Help us Succeed
Mind
Can Playing Video Games Make You Smarter?
Health
Why Do Some People Live So Long?
Recommendations From Our Store
My Science ShopDiscover STEM Kits
My Science ShopDiscover 2022 Calendar
My Science ShopStrange Science
My Science ShopElements Flashcards
Shop Now
Stay Curious
Join
Our List