Picky Eating: Can We Blame Genetics?

It makes sense, evolutionarily speaking, for populations to have a mix of adventurous and picky eaters. 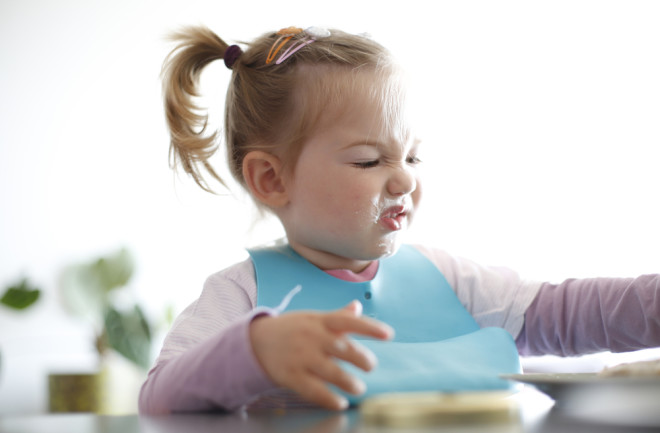 Most Americans (71 percent) say that picky eaters aren’t born that way; instead, they acquire the behavior at some point in their upbringing. That’s according to a survey of over 2,200 U.S. adults carried out by The Harris Poll. Just 29 percent say genetics are to blame. However, truth be told, research has shown that biology may well have a role to play.

“Picky eating is ubiquitous in cultures, it’s not novel to western culture and rich nations, as people often think. It’s in all sorts of societies, which suggests there may be some biological underpinning to it,” says Gary Beauchamp, Emeritus Director and President, Monell Chemical Senses Center.

It makes sense, evolutionarily, for any given population to have both picky eaters and more adventurous types, he explains. Back when our ancestors were hunter-gatherers there was danger in trying new food in case it was poisonous, but the jeopardy cuts both ways; if you’re too picky and food is scarce then you risk starvation. A community with enough of both types of people therefore stood a better chance of survival. That’s one theory behind a possible genetics link, says Beauchamp.

A lot of researchers investigating the genetics of picky eating rely on studying twins. Identical twins share exactly the same genes whereas non-identical have the same amount of genetic overlap as any other set of siblings would. By comparing identical and non-identical twins, scientists can examine the effects of DNA on our eating habits. Researchers at Kings College London looked at the eating patterns of more than 3,000 twins aged 18 to 79 and they found that identical twins were statistically more likely to have the same food preferences than non-identical twins. In fact, they concluded that almost half of a person’s food likes and dislikes can be attributed to their genes.

But what about the other half? Some of it likely comes down to our experiences as infants. “My own research suggests that early exposure to a multitude of different flavors makes a person more likely to be willing to accept new flavours,” says Beauchamp. “We think that might even start in the foetus. All of this suggests a fairly strong environmental exposure component to this.”

That’s why Beauchamp recommends that parents try to expose their children to as many different food flavors and textures as they reasonably can once babies have moved on from milk. “It’s like learning languages where there seems to be an extremely sensitive period in which the infant picks up food preferences that last into adulthood. If you had a food as a child, then you’re more likely to like it as an adult,” he says. “I think this is one way to get out of picky eating, but then again you can’t really do much about the genetic component so it can only do so much.”

It’s hard to say just how common picky eating is. Studies have reported a sizable gamut when it comes to prevalence; some suggest that it’s present in just 6 percent of people, whereas others place it as high as 50 percent. Caroline Taylor, a senior research fellow at the University of Bristol in England, carried out a literature review of different studies tackling the subject of picky eating. She concluded that, “the identification of picky eating in children is hampered by the lack of a universally accepted definition and assessment tool.” There is more consensus, however, when it comes to the most affected age groups. Most research papers seem to agree that picky eating peaks at about 3 years of age.

It’s important for parents to remember that picky eating, within reason, is a normal behavior and one of the best ways to help a child overcome it is not to make a big deal out of it. Research has linked picky eating in adulthood to parental feeding practices in childhood, particularly if parents put pressure on their kids to eat things they don’t want to. So, keep offering different foods, but don’t be dispirited if they say no.

Does Turkey Really Make You Tired?