Should You Take a Vitamin D Supplement?

Low vitamin D intake is still a public health concern. Despite adding it to certain foods in the U.S. and Canada, getting enough of the sunshine vitamin is still a challenge for many people. Some experts say more must be done. 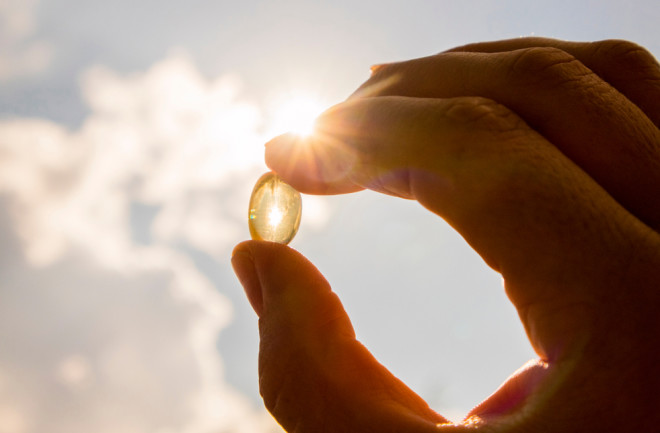 If your parents ever told you to go play outside for the sake of a vitamin or insisted you drank a glass of milk to grow strong bones, they were talking (at least in part) about vitamin D. Though humans have only known of its existence for about a century, the nutrient’s ability to stave off physical development problems has made it a big part of public health conversation and explains why cereal boxes advertise that their product delivers a dose.

“Fortification has been successful in preventing vitamin D deficiency in most people in the U.S.,” says Daniel Roth, a pediatrician at the Hospital for Sick Children in Toronto. Though our bodies make the nutrient after ultraviolet B (UVB) exposure, we don’t always make enough, and adding the vitamin to food staples has helped a majority of the residents in the U.S. and Canada. But the solution isn’t perfect, and decades after fortification practices began, medical experts are wondering how to adapt the public health measure to fit everyone’s needs.

Much of why public health experts talk today (and even a hundred years ago) about vitamin D deficiency is because of rickets — a condition in which bones soften. “The prevention of rickets in infancy and childhood is definitely a driving force for much of the public health interest in vitamin D for the last century, no question,” Roth says. The vitamin is a crucial skeletal building block, and without enough of it, a kid might grow slowly, walk late or develop deformities like bowed legs.

Read more: Is Milk Bad for You? Here's What the Science Says

There are other reasons someone might develop rickets, like a genetic disorder or too-low calcium intake, and there are probably some factors at work that researchers still haven’t figured out. Sometimes, one kid with rickets might have identical vitamin D levels to another child that didn’t develop the condition, and it’s not clear why that happens, Roth says. But ultimately, public health officials think that most instances of the condition stem from too little of the sunshine vitamin (and a calcium deficiency as well, in some cases).

Whether ingested or made in our skin, vitamin D makes its way to our liver, where it breaks down further into a crucial tool that helps our guts absorb the calcium and phosphorus we eat. Both nutrients get funneled to our bones, though calcium also has another responsibility: helping muscles contract. A regular heartbeat, for example, hinges on calcium moving into cardiac cells. To make sure that heart and other essential muscle contractions go smoothly, the amount of calcium that stays circulating in our blood stays within a tightly-controlled range, Roth says — not too high and not too low.

If we don’t have enough vitamin D around to recruit calcium from our diet, our bodies find new ways to get the latter nutrient at the right levels in our bloodstream. The most convenient option? Diverting calcium away from growing bones.

Rerouting a mineral meant for those long, white calcium reserves can keep other, crucial bodily systems functioning, even if it means weakening a kid's developing physical support structure. “Short term, it’s less of a problem than muscle contractility being disrupted,” Roth says. For very young babies and adolescents, these phases of life mean growing fast and potentially dealing with a calcium-control system that’s struggling to recalibrate. Sometimes, rickets for kids in those life stages also come with seizures triggered by calcium deficiency and too-low blood levels of vitamin D.

In adults, vitamin D deficiency clearly doesn't sap growing skeletons of their needs — but it can mean existing bones weaken and become more prone to fractures.

Not Everyone Has Got Milk

When scientists identified vitamin D and what it could do for rickets in the early 1900s, the lessons revolutionized care for soft-boned kids. Rickets shows up repeatedly in historical records, from the bones of 16th-century children to 17th-century doctorate degrees, and cases boomed during the Industrial Revolution and into the 1900s. A study of infants admitted to a hospital in Australia in 1929, for example, found that 52 percent of the 218 babies had rickets. Fortified milk appeared in the U.S. in 1933, and soon after, rickets seemed to almost disappear in North America, Roth says.

Research in the last 10 to 20 years, however, has shown that fortified foods didn't entirely eliminate rickets and vitamin D deficiency in the U.S. The amount of vitamin D authorized to go into a given food is tailored to keep the average resident who might eat the product healthy.

Manufacturers can’t pack as much vitamin D as they want into any grocery store item — the nutrient, if not put to use, gets squirreled away in our fat stores. Too much can lead to bone pain and kidney problems. But fortified foods can’t push people into toxic levels of vitamin D consumption, and it is extremely rare that someone over-consumes the nutrient because they ate too much of a fortified food. More overdoses happen with people taking additional supplements.

Who Is Prone to a Vitamin D Deficiency?

Overall, vitamin D fortification in foods delivers what most people — but not all — might need in their diet. “Of course, as in most policies, that leaves a portion of the population not reached by that policy,” Roth says.

People who don't eat the fortified products, for one, might not get what they need. The National Institutes of Health recommends that adults consume 15 micrograms, which might also be discussed as 600 International Units, of vitamin D a day.

Tuna, salmon, sardines and eggs yolks are a handful of the foods that naturally carry the vitamin, but otherwise, dietary sources in the U.S. stem from milk — a cup holds roughly a fifth of the daily allotment — cereal, juices and some other dairy products.

A 2018 study in the U.S. found that people who rarely drink milk were two and half times more likely to have vitamin D deficiency. People may choose not to have dairy, or they simply can't afford it. Price comparisons in Hawaii, for example, between milk and other healthier drinks like unsweetened tea and less-nutritional options like soda, show the latter is less expensive. Low-income surfaced as a predictor of vitamin D deficiency in the U.S., according to a few surveys.

People who spend less time outdoors than average, like those in assisted living facilities or people who are incarcerated, could also be at risk of too-low vitamin D levels. People with more pigmented skin also develop less vitamin D in a given time period outside than people with less melanin. And even if someone does spend a lot of time outside, those who live at higher latitudes where sunlight — specifically, the crucial UVB rays that trigger vitamin production — is weaker and less frequent could be short on the vitamin, too. All these factors could come into play in someone who also isn't eating vitamin D-rich or fortified foods, magnifying their likelihood of developing a deficiency. Surveys suggest that roughly a third of U.S. adults have less-than-optimal vitamin D levels. About 6 percent have vitamin D levels that are low enough to be at risk for developing rickets or brittle bones. Because a sizable chunk of the U.S. population either has mild or significant deficiencies, that has led some nutritional researchers to suggest that a wider variety of foods should be fortified in order to meet the needs of all residents. Likewise, targeted supplementation programs could help out those who are most deficient.

Generally, public health campaigns that boost fortification are more successful than those that advocate for people to take supplements, Roth says. In part, this is because fortification efforts are more likely to have strong federal involvement and regulations.

Right now, some of the strongest medical consensus around which part of the population should have supplements focuses on breastfeeding infants. The American Academy of Pediatrics recommends that babies get extra vitamin D, which is mostly because babies shouldn’t be lounging under the sun regularly and aren’t eating other fortified foods. Research continues, however, with medical professionals investigating how to strike the right public health balance without leaving anyone behind.

Does Turkey Really Make You Tired?