Swearing Like A Sailor May Not Be Such A Bad Thing

Swearing could actually be an emotional release valve and studies show that people who swear like a sailor are more honest and more intelligent. 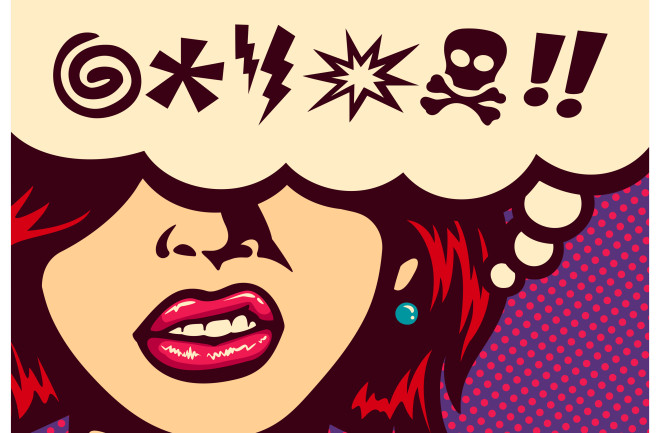 Letting out a few choice words can help relieve pain, and might even make you a little bit stronger. (Credit: durantelallera/Shutterstock)

Well, damn. Maybe you stubbed your toe first thing in the morning. Or some thoughtless commuter forced you to slam the brakes on the drive to work. Perhaps you’re just fed up with it all and feel like sinking to your knees and cursing the heavens.

If you’ve ever suppressed the urge to unleash a string of obscenities, maybe think again. Some research suggests that it might be a better idea to simply let the filth fly.

Scientifically speaking, a penchant for profanity doesn’t seem to be such a bad thing. Studies have shown that swearing relieves stress, dulls the sensation of pain, fosters camaraderie among peers and is linked with traits like verbal fluency, openness and honesty.

And the effects of cursing are physical as well as mental. A 2018 study in Psychology of Sport and Exercise found that letting out a few choice words during a workout can actually make you stronger. In the study, participants who cursed aloud while gripping a hand vise were able to squeeze harder and longer.

“There’s a point where it’s just more efficient to say, ‘F*&^ you,’ than it is to hit somebody,” adds Jay, a world-renowned expert in cursing. “We’ve evolved this very efficient way to vent our emotions and convey them to others.”

As anyone who’s ever struck their thumb with a hammer can attest, swearing is a pretty common response to pain. But for years, some pain specialists thought that cursing doesn’t really help much in those situations. They theorized that swearing might actually have a “catastrophizing” effect, meaning that it prompts people to exaggerate or overstate the severity of pain.

In 2009, researchers from Keele University’s School of Psychology in the U.K. set out to study whether swearing alters someone’s experience of pain. Based on previous assumptions that swearing was a “maladaptive” response to pain, the scientists guessed that swearing would make pain feel worse.

But, surprisingly, the scientists found that swearing actually increases an individual’s pain tolerance. The team tasked 67 undergraduate volunteers with plunging their hands in ice-cold water for as long as they could handle it while repeating a swear word of their choice. Then, they did the experiment again — but this time, the students said a neutral, non-taboo word. The research team found that volunteers were able to keep their hands submerged in the frigid water for longer while repeating the swear word.

In addition, because swearing was accompanied by an increase in heart rate, the scientists think that cursing may trigger an individual’s “fight-or-flight” response. They suggest that swearing triggers negative emotions that serve as an alarm bell, alerting someone to danger and sparking an innate defense mechanism.

Beyond swearing's impacts on the body and mind, research has shown that cursing can influence our social dynamics, too. A 2012 study found that swearing can enhance the effectiveness and persuasiveness of an argument. In addition, cursing can also convey an emotional reaction to something without us resorting to physical violence.

And while many might consider swearing less than savory, a recent study revealed that people who curse often actually lie less and have a higher degree of integrity.

After the scientists surveyed how often participants use profanity, they conducted a series of tests to determine how truthful an individual was. The research team found a positive link between profanity and honesty. Cursing was associated with less deception on an interpersonal level, and higher levels of integrity overall.

For many, the use of obscene language isn’t just a sign of boorish behavior — a common assumption is that people swear because they lack the vocabulary, education or even intelligence to express themselves in other ways. In other words, when language fails, we curse.

“It’s a form of linguistic snobbery,” says Jay, referring to the presumed link between swearing and intelligence. “It’s a cultural stereotype. But the more I became sophisticated in language studies, the more I realized that every language scholar knows that’s not true.”

To deconstruct this myth, in 2015, Jay and a research team explored another possibility — that “fluency is fluency,” regardless of linguistic content. The psychologists found that an individual’s fluency in the English language was linked to fluency in swearing. In other words, swearing may actually be a sign of greater intellect, not less, and a more robust vocabulary.

In the study, the researchers asked volunteers to think of as many words beginning with a certain letter of the alphabet as possible in one minute. Afterwards, they tasked the volunteers to rattle off as many swear words as they could within the same time frame. By comparing the scores in both fluency experiments, the scientists found that those who scored higher in verbal fluency were also better equipped to spout off obscenities.

How Intelligence Is Measured In The Animal Kingdom

Sperm Whales Have the Biggest Brains, but How Smart Are They?