The Neuroscience Behind Last-Minute Holiday Shopping 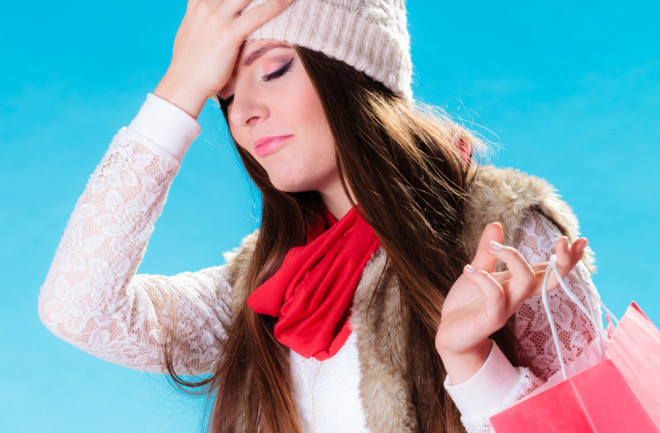 'Tis the season to be jolly — unless it's Christmas Eve and you're staring down an empty toy aisle with an unfinished gift shopping list. Cue the panic and internal screams.

While you might not have lived out this exact scenario, many people have felt the dread of, once again, waiting until the last minute to shop for gifts. And no matter how many times you tell yourself, "I'll start earlier next year," the process repeats itself. Is there no end to this holiday madness?

There are many reasons you might have procrastinated on shopping this year. It could be from family dynamics, having to find a gift for someone you don’t care for, or even the safety of shopping during a global pandemic. But a less-known reason for leaving Christmas shopping until the last minute is because your brain is designed to procrastinate.

Our Brains Are Wired to Procrastinate

Gift-giving is stressful. Even if you’re excited to get someone a present, the pressure of finding something they’ll like can make you anxious. Sam Zand, DO, a practicing psychiatrist and chief medical officer at Better U, says that anxiety can make you feel jittery because the brain triggers a chemical called norepinephrine. An anxious brain also decreases levels of serotonin, which regulates anxiety and happiness. People who are serial procrastinators can live with this chronic anxiety, which may shift how the brain functions over time.

Joseph Michelli, Ph.D., a psychologist, author, and organizational consultant, says that about 20 percent of people are chronic procrastinators and tend to use less of their executive function. They have a weaker ability to plan and act on difficult but important tasks without getting distracted by more impulsive and pleasurable items. Research also suggests that people who constantly procrastinate are less likely to learn from past mistakes.

“The brain makes wise decisions for our survival. But executive function has changed from being an industrialized society and having more pleasurable distractions [around]. So, I think what's happened is that our brains have enabled us to get distracted by things that will take us off-task, but that doesn't necessarily kill us,” explains Michelli.

Another brain chemical known as dopamine may reinforce a pattern of procrastination. Dopamine is involved in reward and pleasure and Michelli says that we get limited dopamine from doing difficult and time-consuming tasks such as Christmas shopping.

But when we procrastinate, the brain releases a bit of dopamine to reward us for not doing the less pleasurable task. Dopamine also strengthens reward-related memory, motivating you to do it again because of how good it felt to procrastinate the first time. So, if you scored amazing last-chance deals in the past, your brain reinforces the behavior to shop last minute again.

Our Brains Fear and Avoid Failure

Our brain seeks rewards, but it also avoids pain. For Christmas shopping, putting off shopping means avoiding the pressure and pain of disappointing a loved one.

“We want to succeed in life, but we [also] want to do things where we feel a reward. If we're afraid of being penalized even in our own minds, we will avoid something so that we don't have that neurological letdown, that sense of having failed,” Carla Marie Manly, Ph.D., a clinical psychologist and wellness expert in Sonoma County, California says.

If you’re chronically procrastinating, you may encourage your brain to continue a habit of not having the motivation to take on a task. “From a neurological level, when we get stuck in a rigid habit or routine, that becomes our what we call default mode network. So, if we run through a habit of procrastinating, that can become hard-wired in the brain,” Zand explains.

Christmas only comes once a year, but chances are, you’ve procrastinated on other things. You may be procrastinating right now reading this article. The good news is that you can rewire your brain by forming habits that discourage procrastination.

One of the best things you can do is to set a clear and achievable goal. If you want to finish Christmas shopping by November 30, you can set calendar reminders of your deadline. To avoid overwhelming yourself, try to knock out only one thing at a time and give yourself enough time to accomplish the one task.

“Build specific micro-goals that support the ultimate result,” Manly explains. If your goal is to be done by November 30, calendar the following Saturday to shop for only one or two people and then the next Saturday for another.

Because Christmas shopping is often more time-consuming than a trip to the grocery store, consider adding extra time to what you’ve already allotted. So, if you think shopping for your cousins will take 4 hours, tack on another two to be on the safe side. If you don't need that time, then you have the bonus of an extra hour or two that you can use for something else. Here, Manly says you didn’t set yourself up for failure and will probably be proud of achieving your goal within the timeframe.

You Can Rewire Your Brain to Stop Procrastinating

One beauty of the human brain is that it is plastic. No matter how old you are, your experiences can change or create new neural networks. In other words, you’re not doomed to procrastinate forever.

But it will take work. Manly advises cognitive-behavioral therapy and practicing daily mindfulness to understand your motivations for procrastinating. Doing so can help shift your mindset toward performing a challenging or daunting task.

Because our brains were wired this way for decades, it may take some time and patience to rewire it. But if you keep pushing your boundaries, one little task or activity at a time, you can make your brain more flexible and wired towards less procrastination.

Do Cats Have Dreams?

Your Navigation Skills Depend on Where You Grew Up