Biologists identified a colorful fish, a super-snouted frog and many more amazing animal species this year. 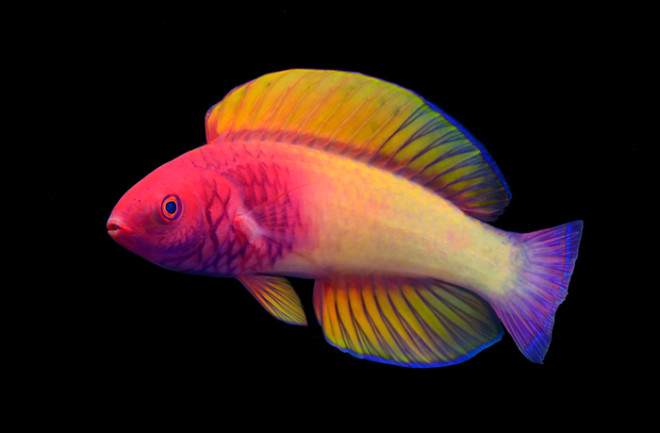 Throughout the past 250 years of scientific classification, biologists have discovered and described as many as 1.2 million separate plant and animal species. Yet they're still only scratching the surface of what odd organisms are out there, wandering our world.

In fact, biodiversity specialists say a shocking number of species have not been subject to scientific study. Though approximations differ, one commonly cited paper posits that around 86 percent of the planet's plants and animals have yet to be formally classified, including about 91 percent of ocean species.

Untangling these unfamiliar species slowly but surely, biologists introduced a number of fascinating finds this year alone. Here are a few of the most intriguing animals identified in 2022 thus far:

Researchers first found this flashy fish in the 1990s, but classified it as an adult form of an already acknowledged species. In March though, an analysis found that this particular swimmer, Cirrhilabrus finifenmaa, is, in fact, its own separate species.

Also known as rose-veiled fairy wrasse, these fish vary in their specific coloration, yet share a similar smattering of stripes and fan of fins along the top and bottom of their bodies. According to the authors of the analysis, these fish dart through the shadowy, twilight reefs off the coast of the Maldives, and their identification stresses that many mysteries remain in our oceans.

This frog’s substantial snout and similarity to the Amazonian tapir may make it seem like a simple find, but Synapturanus danta’s small size and tendency to burrow have helped it hide from biologists for years and years. That is, until they realized that this tiny, tapir-like frog is far from silent.

Following the amphibians' shrill calls as they sounded from the floor of the Amazon rainforest, a team of researchers caught several specimens and confirmed their identity as a new species for a paper published in February. According to the team, these hard-to-find frogs are a hopeful sign of the health of the region and represent its hidden biodiversity, burrowed underneath the forest floor.

Some species are identified in the wild, whereas others are discovered in the carefully conserved collections of museums. Scrutinizing specimens taken from nearly 10 separate scientific institutions, specialists identified a new species of spiny lizard, Sceloporus huichol, in a study in May.

Standing apart from similar species (such as S. torquatus and S. melanogaster) thanks to its slightly smaller size and strange coloring, this once-obscure critter is covered in spiky scales and scuttles through the mountainous forests of Central Mexico. According to the authors of the study, the spiny species takes its name from the Huichol, an indigenous tribe that resides in the same region.

Sponge crabs are a family of crustaceans that scurry through the ocean shallows, or anywhere with a substantial population of sea sponges. Why? Well, these crabs collect, clip, and wear sea sponges (as well as other sedentary sea creatures) on their shells as a form of creative camouflage.

Though there are already several species of these crafty crabs known to scientists, an analysis from April identified a strange new crab along the coasts of Western Australia. Cloaked in “shaggy, surprisingly soft” fur, scientists say that the fluffy coat of Lamarckdromia beagle could protect the species from predators as an added layer of camouflage.

While some new species are widespread, others are only identified in the most restricted, remote regions of the world. That’s certainly true of Otus bikegila, a novel species of scops owl situated solely on Príncipe, a small island in Africa's Gulf of Guinea. Confined to the island’s indigenous forests, the Príncipe scops owl occupies an area of around 6 square miles, according to a study from October.

The population remains relatively strong, with approximately 1,000 to 1,500 individuals. But the constrained nature of the owl’s natural territory caused the authors to propose that the species be classified as “critically endangered.” The authors did so at the same time as they announced its discovery, demonstrating the uncertainty of bird biodiversity in a constantly changing world.

6. A Jelly Without A Telltale Tentacle — Atolla reynoldsi

Before seeing this species, biologists believed that all Atolla jellies shared a similar trailing tentacle, which they sway alongside shorter appendages to seize their dinner as they drift through the sea. As a result, spotting an animal similar to the Atolla (though without its trail) caused a significant stir.

Identifying Atolla reynoldsi in a study from April, scientists introduced much more about the species than its missing extremity. In fact, the strange species curls the short tentacles that it does possess in coils close to its body and it's covered in bumps. According to the scientists, A. reynoldsi is not common but it's important to study to protect the individuals that do wander the ocean's depths.

Though biologists have already accepted around 5,000 mammals as distinct species, scientists suspect that there are many more waiting around for formal identification, sometimes in plain sight. In fact, the similarities of many of these mammals to the already acknowledged species make their individuality all the more difficult to pin down.

For instance, though scientists once thought that only a single species of sloth ambled through the forests of Brazil, it now appears that there are actually two species in the area, one from the north and another from the south of the region. While the northern varietal (Bradypus torquatus) was first found all the way back in 1811, the southern varietal (Bradypus crinitus) was identified in research from September, partially thanks to its flatter skull.