Scientists say that this ancient, armored worm may have served as the ancestor to several creatures that still survive today. 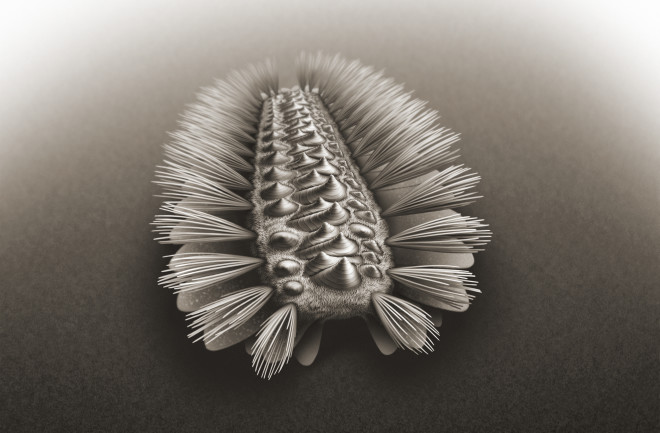 Spotting any similarities between the brachiopods, the bryozoans and the phoronids may seem impossible. These sea creatures do all live sedentary lifestyles — attaching themselves to rocks and reefs along the ocean floor. But what characteristics could the clam-like, hard-shelled brachiopods possibly share with animals that resemble frilly aquatic plants?

Scientists say that the answer lies in these animals’ ancestry. According to recent research in Current Biology, all living brachiopods, bryozoans and phoronids may trace their lineage back to a single species — an ancient, armored worm known as Wufengella.

"When it first became clear to me what this fossil was that I was looking at under the microscope, I couldn’t believe my eyes. This is a fossil that we have often speculated about and hoped we would one day lay eyes on," says Luke Parry, a study author and paleobiologist at the University of Oxford, according to a press release.

All animals are separated into one of around 30-or-so separate categories called phyla. These phyla all feature specific sets of anatomical structures that distinguish them from the others, and only a few of these structures are included in more than one phylum.

For instance, only three phyla — the brachiopods, the bryozoans and the phoronids — share sets of folded-up, frilled tentacles called lophophores. Allowing an animal to seize particles of food as they float through the sea, these specialized tentacles provide the three phyla their collective title, the "lophophorates." They also offer an anatomical clue that the lophophorates could be closely related to one another, despite the other differences in their body structures.

Now, a particularly well-preserved fossil specimen from 518 million years ago supplies further support for the close ancestry of these three phyla. It reveals that their most recent common ancestor was probably the Wufengella, an agile, armored species of worm.

"This discovery highlights how important fossils can be for reconstructing evolution," says Greg Edgecombe, a study author and a researcher at the Natural History Museum in London, according to a press release. "We get an incomplete picture by only looking at living animals, with the relatively few anatomical characters that are shared between different phyla. With fossils like Wufengella, we can trace each lineage back to its roots, realizing how they once looked altogether different and had very different modes of life, sometimes unique and sometimes shared with more distant relatives."

According to the team of researchers analyzing the fossil, Wufengella was a small, short species less than an inch long. The ancient worm was protected by an array of armored, shell-like plates, and covered in a number of lobe-like protrusions and bunches of bristles all across the sides of its body.

These traits, the researchers say, in addition to internal structures within the worm’s body, imply the species' shared ancestry with the lophophorates. Plus, when combined with molecular analyses of the animals' amino acid sequences, they confirm that today's brachiopods, bryozoans and phoronids are all closely related to one another.