Crab-like body plans have evolved independently at least five times. Biologists are still trying to figure out why. 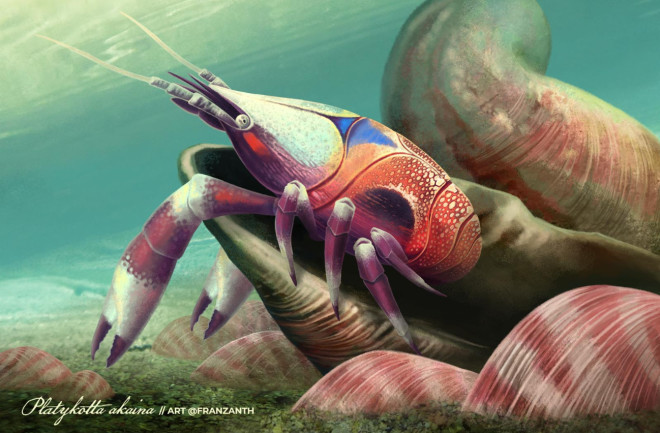 In 1989, paleontologist Stephen Jay Gould proposed a thought experiment: What would the world look like if we turned back time and replayed the evolutionary tape? “I doubt that anything like Homo sapiens would ever evolve again,” he concluded. Maybe not. But crabs might.

Still, biologists don’t know why crabs keep evolving. Figuring it out would satisfy the online masses, sure, but it would also be a step toward solving other important scientific mysteries. For instance, why some species share evolutionary paths while others forge unique ones (looking at you, platypus).

What Are Crabs Anyway?

Crabs belong to a group called meiurans, which includes brachyurans (or “true crabs”) and anomurans (or “false crabs”). At first glance, the differences between the two subgroups are subtle; the most obvious is that brachyurans walk on four pairs of legs while anomurans walk on three. Yet they’re actually separated by hundreds of millions of years of evolution. What’s more, each has evolved crabby body plans multiple times.

The earliest meiurans probably looked like squat lobsters, says Javier Luque, an evolutionary biologist at Harvard University and Florida International University. As they carcinized, they widened, flattened and hardened their bodies. They also shrank and tucked their segmented abdomens underneath their shield-like shells.

That transition can be dramatic, like when king crabs evolved from hermit crabs. “You look at them and you think, ‘what the hell?’” says Joanna Wolfe, also at Harvard. Seriously: Hermits and king crabs couldn’t look more different. The fact that hermits carcinized — and that this happened at least four other times — is jaw-dropping.

It’s not clear why crustaceans keep doing this, but it might relate to mobility and predation, Wolfe and Luque say. Shortening and widening the body stabilizes their stance. That could allow for the sideways walking the group is famous for and help them invade dry land.

Crabbiness could also stave off predation; the crustaceans tuck their scrumptious tail under a protective shell, and can squeeze their disc-like bodies into narrow cracks. The reverse seems true, too. Species that avoid predation by other means, such as by co-opting snail shells or burrowing, often lose crab-like body plans or never evolve them in the first place.

Carcinization isn’t a one-way street. Crabs decarcinized at least seven times, leading to weirdos like tick-shaped frog crabs and symbiotic porcelain crabs. The poster child of decarcinized oddballs, though, might be an extinct crustacean called Callichimaera perplexa. Luque says the 90-million-year-old creature is “stuck in puberty” and PBS Eons called it the “Baby Yoda” of crabs.

That’s because crustaceans spend their infancy as swimming larvae called zoea. The newborns have long tails, round heads and beady eyes. Typically, once they’re mature, they settle to the seafloor and shapeshift into crab-like forms. C. perplexa, however, maintains its juvenile qualities even as an adult, wading through water like a big larval baby.

With bulbous eyes, paddling legs and long predatory mouthparts, “it’s the platypus of the crab world,” says Luque. “And it holds an important key for understanding crab evolution.” Perhaps crabs gain and lose their form so frequently because they can flexibly time when and if to metamorphose.

To find out, Wolfe and Luque are shoring up the fragmented fossil record, refining evolutionary trees and identifying adaptive benefits that could favor crabbiness. They’re also leveraging modern tools like high-powered X-rays and genetics. “It’s a complicated story,” Wolfe says. “But that's okay, because that’s evolution.”

Evolution Is a Tinkerer

Memes portray crabs as the optimal body form, but carcinization might not be entirely adaptive. Instead, it could reflect constraints — like deep-rooted genes and developmental patterns that funnel meiurans into a small set of possible body plans. “Maybe it's something else entirely that has driven this repeated evolution, [something] that isn't just adaptation by natural selection,” says evolutionary biologist Jonathan Losos of Washington University in St. Louis.

For example, Wolfe and Luque hypothesize that the segmented abdomen and protective shell are inextricably linked — a phenomenon called evolutionary integration. If natural selection favored small and hidden abdomens, then the shell could have just flattened as a byproduct.

Evolution is a tinkerer, not an engineer. It can jury-rig different inventions with a single Lego set, say, but it’s limited by the pieces (in this case, genes and body plans) available in the box. It’s entirely possible that the entire crab phenotype evolved simply because one component is beneficial while the others are evolutionarily integrated and forced to tag along.

Variations On a Theme

And carcinization is just one example of convergent evolution, “when two species evolve to become more similar,” Losos says. Convergence can cause whole bodies and lifestyles to align, like in the genus of lizards commonly known as anoles that Losos studies. But crabs show that it can also be more nuanced. Despite sharing similarities, crabs are strikingly diverse. They live on land or sea, can be microscopic or larger than a human, and claim ecological niches as disparate as burrowers and parasites.

There must be some benefit unifying this astonishing biodiversity, Losos says. But his bigger question is why convergent evolution produces facsimiles in some cases while allowing diversity in others: “That’s a very interesting question which, as far as I’m aware, hasn’t been addressed very much.”

Losos says that people are amazed when they first learn of convergent evolution — but crabs take that fanfare to a new level. They appear in cartoons, astrology and even a dancing crab rave video that’s amassed over 200 million YouTube views (goodbye Lofi Beats Girl, hello 10-hour crab rave).

We love them because of how different they are from us. “And yet, we can see ourselves in there a little bit.” Luque says. “They’re so beautifully weird.” Wolfe adds that crab ubiquity in pop culture is why carcinization is so shocking to most people: “Everyone thinks they know what a crab is, and then they’re wrong.”