Folded Skin Allows Elephants to Stretch Out Their Trunks

This finding could contribute to elephant conservation efforts and could inform the creation of nature-inspired robotics. 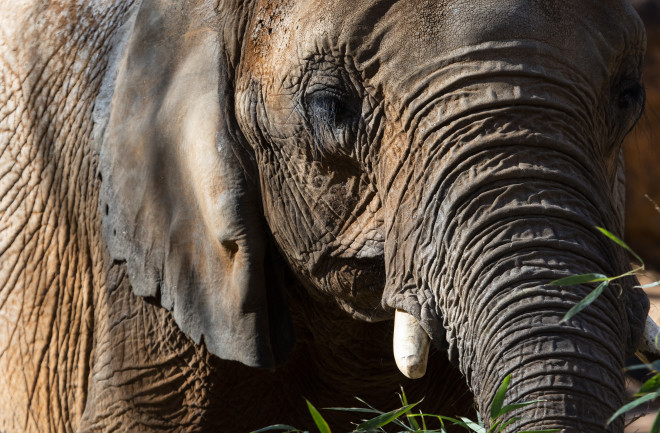 Elephant trunks are all-purpose appendages, suited for gently grasping foliage, such as singular blades of grass, as well as uprooting whole tree trunks.

In the face of such versatility, there’s still a lot to learn about the mechanics of elephant trunks. In fact, recent research in the Proceedings of the National Academy of Sciences reveals that there’s more than muscle moving this flexible appendage. According to the study, the folded skin at the front of the trunk adds to an elephant’s mobility, allowing the animal to stretch out and pick up faraway objects. The findings, the researchers say, could improve scientific efforts to protect and preserve elephant populations and could also inspire innovations in the field of robotics.

Relatively few studies have investigated the mechanics of elephant trunks in recent years. As such, scientists have tended to assume that the muscly appendages stretch consistently across their front and back.

The Georgia Institute of Technology team of researchers found that the flexibility of the skin of the trunk is actually inconsistent. The front of the trunk, the team found, extends further than the back of the trunk as the elephant reaches for an object, improving its overall ability to stretch out.

The researchers say that understanding these mechanics and the ways that elephants interact with their surroundings could assist with their conservation. They also say that these understandings could contribute to robotic innovations. According to their research, covering robots in a malleable material, similar to the skin of an elephant trunk, could maintain their flexibility, while also adding to their strength and their sturdiness.

"Soft robotics created with biologically inspired design are always based on muscle movement. If they were wrapped with a protective skin, like an elephant’s muscle-filled trunk, the machines could apply larger forces," says lead study author Andrew Schulz, a student in Georgia Tech’s George W. Woodruff School of Mechanical Engineering, in a press release. "Now we know that skin is another tool at [our] disposal."

The researchers captured videos of African savanna elephants at Zoo Atlanta, stretching out their trunks to pick up pieces of food. They anticipated that the elephants’ trunks would stretch consistently.

"But when we looked at our high-speed camera footage and plotted the trunk’s movements, we were surprised. The top and bottom weren’t the same at all," Schulz says in a press release.

"Flexible skin folds are the elephant’s innovation," says senior study author David Hu, a professor in Georgia Tech’s Woodruff School and School of Biological Sciences, in a press release. "They protect the dorsal [front] section and make it easier for the elephant to reach downward, the most common gripping style when picking up items."

The research also revealed that the trunk extends similarly to a telescope, stretching out in sections. According to the team, elephants first lengthen the segment of their trunk that features its tip, then they stretch out the successive segments coming closer and closer to their faces.

"Elephants are like people: they’re lazy," Schultz says in a press release. "An elephant will first stretch the end of its trunk, then the adjacent section, because they’re easier to move. If an elephant doesn’t have to work very hard to reach something, it won’t."