New research calls into question what we know about the evolution of animal social cognition. 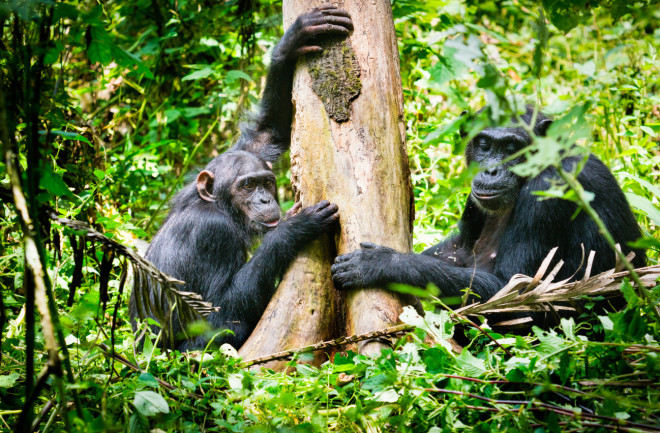 A family of chimpanzees from the Kibale Forest in Uganda. (Credit: Kirill Trubitsyn/Shutterstock)

Fiona plucks a leaf from a branch and brings it close to her mouth. Thinking better of it, she then shows the leaf to her mother, who gazes at it for a short moment before turning away. It’s nothing out of the ordinary for your everyday nature aficionados — except that Fiona and her mother, Sutherland, are two adult chimpanzees residing in the Kibale Forest of Uganda.

Researchers who observed the interaction have dubbed it the first instance of a non-human primate sharing something with a peer simply for the sake of sharing. Their findings, published in PNAS this month, dispel the myth that only humans are capable of grabbing another’s attention solely to share a discovery or remark on an experience.

“As soon as I saw the video, because I haven’t ever seen the chimps do anything like this in all the years that I’ve been working with them, it was just very, very clear to me,” says Katie Slocombe, a lead author of the study and professor at the University of York, who researches joint attention in chimpanzees and human infants.

It’s common for humans to point at things, or to hold things out and show them to others solely to share the joy of a new discovery. We often begin this behavior as young as 10 to 13 months of age — just think of a child showing off their toys, or something they’ve picked up from the floor, to a parent. To the scientific community, these are called protodeclarative gestures.

Yet researchers had never recorded other primates carrying out these behaviors. Even for great apes like wild chimpanzees (Pan troglodytes), referential gestures have an apparent scope: They are imperative, like a request for something in return. Chimps may point at an object in an attempt to get somebody to pass it to them, for example, or wave toward a specific location on their body where they want to be scratched.

The video footage collected in this new research suggests that, in specific social situations, chimpanzees are also capable of showing each other objects for the sake of showing off. “Fiona just wanted her mom to look at it,” Slocombe says.

Slocombe’s team at the University of York additionally pored over 84 other video recordings of leaf-grooming wild chimpanzees from the same community, in order to see whether Fiona and Sutherland might have instead been sharing the leaf as food. Perhaps Fiona was attempting to start some form of play or self-grooming.

But these videos confirmed Slocombe’s initial gut feeling: Fiona couldn’t have been sharing food because the type of leaf she manipulated isn’t part of this species’ diet. She never gave or dropped the leaf for her mother to pick up and munch away on. Furthermore, prior research suggests that leaf grooming is never used to elicit social grooming, Slocombe notes. And playing would usually be a much more physical and aggressive activity among chimpanzees.

All in all, Fiona’s movements match what human infant literature usually describes as holdout behaviors.“I think it's very clear. It looks really amazing,” says Simone Pika, a professor at the University of Osnabrück in Germany who studies gestural communication but was not involved in this study. “It really looks like declarative referential signaling.”

Importantly, the findings not only give researchers a new lens to investigate chimpanzee gestures, but they also reframe the kinds of questions we ask about the evolution of animal social cognition.

Some have argued, Slocombe explains, that our ability to share attention is critical to acting together and engaging in joint actions, understanding one another's goals, and understanding each other's perspectives — crucial elements underlying uniquely human complex cooperation. “Joint attention has been pinpointed as one of these really small steps in evolution, which probably had massive downstream changes and consequences,” she says.

If further research proves that chimps are capable of this too, it would suggest that these cognitive tasks didn’t evolve in the human lineage alone. “It is not ‘How did this thing evolve?’” Slocombe says. “But how did [human] motivation to engage in this behavior increase? Because even though we've shown chimpanzees have done it in this one instance, humans do it all the time.”

It's true that Fiona and Sutherland have provided only extremely preliminary evidence, just as it’s true that much more research is needed. It remains unclear why and how often primates might be doing this; maybe sharing for sharing’s sake only happens in very specific social situations, Pika suggests.

Or, given that Fiona and Sutherland are very close, in true mother-daughter fashion, it could be that only their high degree of intimacy enables these kinds of interactions.