Astacus astacus is battling invasive species from one side and plague from the other. Researchers ran the numbers to predict which will come out on top. 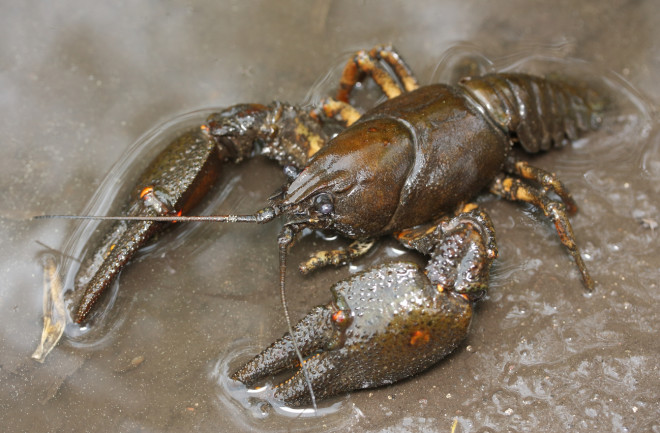 A plague, carried by invasive species originally from North America, has long decimated populations of Europe’s noble crayfish (Astacus astacus) — now listed as vulnerable on the IUCN Red List. Recent discoveries of noble crayfish resisting less virulent strains of the plague, however, have given scientists hope that the species may, in time, weather this pathogenic storm.

Don’t celebrate just yet. The resistance also prompts questions of how the noble crayfish might fare against its invasive crayfish counterparts if the impact of the devastating plague is eventually neutralized. Could the invasives outmuscle the native species?

Naturally, in the search for answers, researchers staged a faceoff between A.astacus and two invasive species: the spiny-cheek crayfish (Faxonius limosus) and the white river crayfish (Procambarus acutus). By tracking which crayfish started a fight and logging wins and retreats, the researchers found that mature noble crayfish can indeed hold their own against these two invasives. The results of the wrestling tournament tentatively indicate that if the plague does ease off, noble crayfish “might still have a promising future when confronted with invasive species,” the study’s authors write in a paper published earlier this year.

You may be wondering why so much fuss is being made over a single species. “If our native crayfish disappear from freshwater ecosystems, this will lead to the waters becoming dirtier, because crayfish clean the water,” says Kathrin Theissinger of the LOEWE Center for Translational Biodiversity Genomics in Germany, who was not involved in the study. “We will have less biodiversity in our freshwater ecosystems because some species just cannot exist without the crayfish.”

Among the many hats the noble crayfish wears is that of “environmental engineer.” It burrows holes, thus shaping freshwater ecosystems and providing habitats for other species. (And from an economic and cultural standpoint, the commercial value of A.astacus as a source of food is hard to beat; it’s one of the most sought-after crayfish species thanks to its superior taste.)

Losing the noble crayfish — or other native species — is no minor issue.

Though there may be some hope for noble crayfish to compete against invasives, caution is still required, says Ivo Roessink, a senior scientist at Wageningen Environmental Research in the Netherlands and primary author of the recent study. “We are fully aware that there are many more interactions. This is only one little finding.”

In short, there are other factors — such as rate of growth or age of sexual maturity — that could determine whether invasive species outcompete native species. “This is only a snapshot of a certain part of the life stage of these animals and, in reality, it’s much more complex,” Roessink adds.

One other aspect that he and his team plan to investigate further is the influence of colder climates on the growth rate of native and invasive juveniles. “There’s still quite some puzzling to do. But at least a few obvious pieces give a ‘yay’ for the native crayfish,” he says.

“I think it’s good to highlight potential positive developments,” says Theissinger, though she also urges caution. “I think we must make really clear that this does not mean that it is not a problem to have invasive crayfish. It might have worked with the spiny-cheek crayfish, but it might not work for others.”

Theissinger points to the example of the calico crayfish (Faxonius immunis), an invasive species that caused devastation in parts of Germany. “A few weeks or months after the calico crayfish reaches a water body, nothing lives there anymore. There’s just a brown soup,” she says. Studies also show that the signal crayfish (Pacifastacus leniusculus) outcompetes native European species. There are thought to be at least 14 such invasive crayfish species across Europe.

A “Super-Duper Stupid Thing to Do”

Another ever-present issue is the crayfish plague. Even though researchers detected resistance to less virulent strains, other strains may still unleash mass mortality among populations. Japo Jussila, a researcher at the University of Eastern Finland who has studied the noble crayfish for several decades, sees the results of the newest study as a positive — but he doesn’t see total eradication of the plague happening any time soon.

We know the plague is caused by Aphanomyces astaci, a kind of fungus. Back in the 19th century, it killed off crayfish populations primarily in Italy before making its way across all of Europe. In time, says Jussila, native species developed resistance to these early strains.

However, when North American crayfish — notably the signal crayfish — were introduced to replace dwindling native stocks in the 1960s, the invaders brought with them novel “killer” strains. Fast forward to today, and European crayfish populations have been decimated in the wild. Repeated introductions resulted in what Jussila and others describe as a “man-made ecological disaster.”

Invasive crayfish introductions continue to occur, though the primary culprit is now considered to be aquarium owners who release their crayfish and inadvertently add new strains to freshwater systems.

Roessink's study offers a glimmer of hope for the future of the noble crayfish in the wild, yet considerable obstacles remain. There is no single solution. But experts agree on an initial step that can be taken to give the noble crayfish a fighting chance: the end of alien crayfish introductions. “This introduction of alien crayfish to Europe,” says Jussila, “and together with their disease — the crayfish plague which has been introduced several times — is unfortunately a super-duper stupid thing to do.”