The Coliseum and the Roman Forum aren't likely to come crashing down anytime soon. But researchers have found that invasive species still pose a serious threat to many of the city's historic sites. 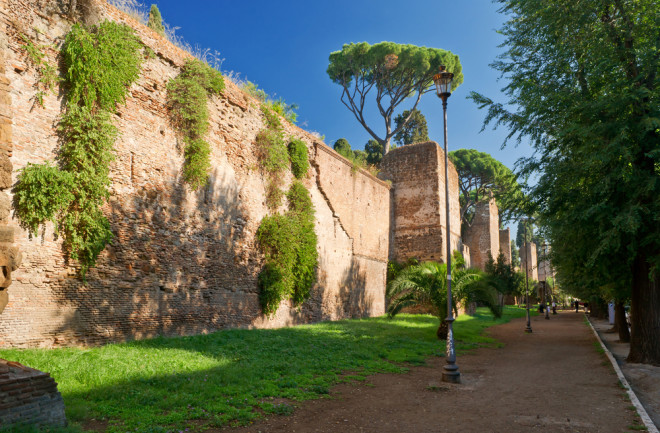 Rome has been invaded a fair few times in its long history. (The Gauls, Vandals and Normans, to name a few, led some of the most iconic raids on the Eternal City.) Today, another, more subtle type of invasion is under way — led by invasive species that are posing a threat to some of the city’s historic sites.

A study published last year in Biological Invasions tracked the growth of invasive plants in 26 of Rome's historic sites. The authors compared plant coverage in the 1950s with follow-up studies in 1990, 1995, 2005, and 2019. They found that over time, invasive species have been slowly muscling out the city's native plant life. Beyond that, the study authors also warned that invasive plants are an increasing challenge for the conservation of Rome’s historic sites. “This increase undoubtedly constitutes an alarming threat to the conservation of monuments and possibly even to the conservation of the city’s biodiversity,” the authors’ state.

Invasive plants are well known as a threat around the world, impacting biodiversity and the global economy alike. These invaders are estimated to damage the economy of Europe to the tune of €12 billion ($13.3 billion) per year due to impacts on health, crops, and damage to infrastructure.

In Rome, those species slowly creeping into ancient sites are primarily ornamental plants that are kept in gardens or have been planted around the city. One invasive, the tree of heaven (Ailanthus altissima), is of particular concern. It is the only non-native species “acknowledged to have a highly significant negative impact” on historical sites due to the destructive potential of its roots, according to the study. In the 1950s the species appeared in only five historical sites across Rome; today, it occurs in 22 of the sites reviewed by the authors.

Originating in China, A. altissima first arrived in Europe via Paris in the 18th century, brought by an enterprising missionary. Over two hundred years later, it has spread to every continent besides Antarctica. Due to its destructive potential, the European Union has added it to its list of invasive species of concern.

The roots of the invasive "tree of heaven" can cause serious damage by exploiting cracks in a structure's walls. (Credit: Grigorii Pisotsckii/Shutterstock)

“Ailanthus is definitely one of the most problematic species,” says Carlo Ricotta, a landscape ecologist at Sapienza University in Rome and one of the study’s authors. “Because it has all these biological strategies that enable them to do the damage.”

The plant can spread rapidly: One study found that mature plants can emit over one million seeds per year. It is also equipped with an “extended and vigorous root system,” adds Anna Maria Palermo, an ecologist at the University of Calabria, who studied the impact of plant life on the Santa Maria della Pietà, a historic building in southern Italy dating back to the 13th century.

A. altissima can exploit cracks in walls, and in some cases, undermine the stability of structures and even damage sewers. As they disperse on the wind, “they can reach even higher parts of the monuments where management strategies are more difficult,” adds Ricotta.

A 2020 study that investigated A. altissima’s impact on Rome’s third-century Aurelian Walls, found that the plant’s roots caused damage that was not always visible to the naked eye. “As such, the visible damages caused by A. altissima are potentially just the tip of an iceberg, as its root apparatus is capable of reaching massive underground dimensions,” the authors of that study noted.

Though it’s not just invasive plants that pose a risk to Rome’s ancient monuments. At her site, Palermo notes, the damage caused by invasives is similar to that of native species. Other studies have found damage caused by native plants to historic sites such as the Jewish catacombs beneath the Villa Torlonia, or the Etruscan tombs, located outside of Rome and listed as a UNESCO World Heritage Site.

Still, as concerning as this ongoing invasion is, it is not going to be bringing ancient monuments crashing to the ground anytime soon. “At risk does not mean it will fall in the next ten days,” says Ricotta. Yet, in time, a lack of maintenance can in some cases lead to significant damage.

It is unlikely that the major “symbols” of Rome, such as the iconic Coliseum or the Roman Forum will ever be among those seriously affected, Ricotta says. Other, less known, off-the-tourist trail sites however — such as the Pons Aemilius, Rome’s oldest stone bridge over the river Tiber — receive far less attention and management. In the long-term, without adequate control, plant species could add to the deterioration of such monuments, undermining efforts to conserve them.

Managing the problem is complicated, the authors of the Biological Invasions study note. Plant life can in some cases help preserve ancient structures against the ravages of the elements, while historical sites frequently provide a home to biodiversity, adding to their antiquated charm. The same Etruscan tombs that have been damaged by the roots of trees, for example, were also found to provide a home to rare plants, such as the tongue-orchid (Serapias lingua).

For problematic species like A. altissima, however, management is needed to keep on top of their growth. “You have to eliminate these plants more or less every year,” says Ricotta.  Palermo adds that local governments and administrations — especially in small villages, like Squillace, where the Santa Maria della Pietà is located — should be keeping a watchful eye on the presence of invasive species such as A. altissima. “It is easier to cut the tree periodically than to extirpate its roots because it would completely damage the structure.”