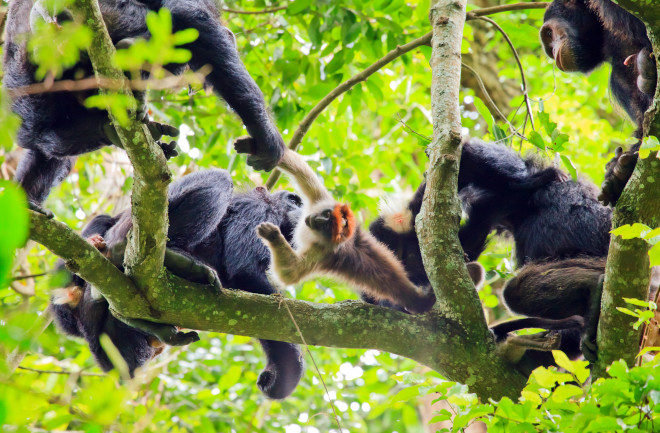 Human speech and cooperation are intertwined. For example, talking can help us defend a basketball team or take down prey. Distantly related mammals like dolphins also vocalize to coordinate. But experts still debate when it evolved in primates.

In a new study, experts argue that vocal coordination evolved before humans split from chimpanzees and bonobos. They analyzed cooperative chimp hunts and showed that vocal exchanges facilitate their collective pursuit. The finding, the authors say, could mean that communication and cooperation are at least six million years old, originating before we separated from other great apes.

Chimps work together to capture and eat monkeys. It’s dangerous, energetically taxing and doesn’t guarantee a meal at the end of the day. Larger groups capture prey more often, and it would help apes to communicate their intent, joining a collective hunt and assessing the groupwide enthusiasm. To test if this communication network exists in the wild, the scientists analyzed 227 hunting events they observed in Uganda between 1996 and 2018.

The primates barked to coordinate their pursuit. Vocal chimps were more likely to join the hunt, and called to signal their intent. Groups that barked also recruited more teammates, initiated the hunt more quickly and captured prey more rapidly.

“Strikingly, following the production of hunting barks, we observed more hunters joining, greater speed in beginning the chase, and a shorter time to make the first capture,” says study co-last author Zarin Machanda in a press release, from Tufts University, who heads up the Kanyawara Chimpanzee Project.

The team isn’t sure how the bark works as a call to arms. On one hand, hearing others could rile chimpanzees up, and excited individuals could be more willing to join a chase. On the other hand, individuals might listen to skilled groupmates that chime in to make complex decisions about whether a hunt is likely to succeed.

They hope to tease apart these possibilities through future studies, but for now, the findings at hand are profound. Cooperation and communication, it seems, aren’t uniquely human. They probably originated deep in the primate evolutionary tree — at the very least, dating back six million years to the time that chimps and humans shared their last common ancestor.

Defining the Line Between Missing and Extinct Species