The ancient mammalian survivors that emerged in the Paleocene looked very different from their modern analogs. 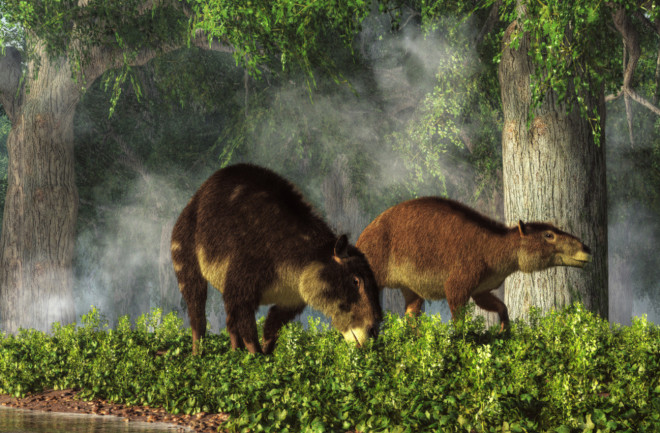 Eohippus, the earliest known ancestor of the modern horse after the extinction event that ended the reign of the dinosaurs. (Credit: Daniel Eskridge/Shutterstock)

Some 66 million years ago, an asteroid roughly 7 miles wide slammed into the Earth. This impact was different from all others that came before — and those that have happened since. Life on our planet was instantly thrown into a fifth mass extinction that ended the Age of Dinosaurs and marked the beginning of the Age of Mammals.

But the idea that dinosaurs “dominated” ancient ecosystems is a distortion. Mammals and their relatives did quite well during the Triassic, Jurassic, and Cretaceous. In fact, recent research has shown that competition between mammals and their more archaic relatives (called mammaliaforms) was more important for how evolution unfolded than the depredations of the dinosaurs.

Even after the intense heat and stifling cold created in the wake of the end-Cretaceous impact, mammals didn’t simply poke their noses above their burrows into a world where birds were the only remaining dinosaurs. Paleontologists are only just starting to uncover how mammals thrived in the wake of the disaster. Discoveries in the field and the lab — from outside Denver all the way to Edinburgh, Scotland — are documenting the unusual ways beasts evolved at the dawn of the Age of Mammals.

The period of time immediately following the Cretaceous is known to paleontologists as the Paleocene. “The Paleocene gives us fascinating insight into how mammals might [have] evolved in a post-apocalyptic landscape with a lot of vacant ecospace,” says University of Edinburgh paleontologist Paige dePolo.

It was the mammalian survivors of this apocalypse that set the stage for all the different ways mammals would evolve: how they moved, what they ate and how large they became. One of the best places in the world to study this period is in Colorado’s Corral Bluffs. Here, various skulls and other skeletal parts are preserved in tough boulders, called concretions, that show how life recovered during the million years after impact.

So far, scientists have recovered 16 mammal species at the Corral Bluffs site, from different rock levels that span the first million years of the Paleocene. The mammals that survived the mass extinction and emerged into the Paleocene world weighed only about a pound. But as thick forests full of ecological opportunity sprung up, some mammals started to grow larger.

After 100,000 years, mammals as large as 6 pounds were running around — significantly bigger, but still lighter than a house cat. After 700,000 years, however, some mammals weighed over 100 pounds. That’s quite a growth spurt.

You Are What You Eat

What plants were doing during this time is an important piece of the story. Angiosperms, or flowering plants, became much more numerous than ancient evergreen relatives and other conifers during this time. Not to mention, without multi-ton dinosaurs roaming around eating plants and trampling vegetation, forests could grow thicker and offer more habitats for mammals to evolve new niches.

Read more: Turns Out, a Variety of Mammals Flourished Among Dinosaurs

“One of the most interesting things at Corral Bluffs is that we not only have the vertebrate fossils, but we also have a remarkable plant fossil record,” says Denver Museum of Nature and Science paleontologist Tyler Lyson, calling the site “the holy trinity of paleontology — vertebrates, plants and time.”

One of the most remarkable finds at the site is not a mammal, but a plant. The oldest legume yet known, in fact. Today, we known legumes as beans, chickpeas, lentils and clover, plants rich in protein. Such species likely underwrote the expansion in mammal body size, providing enough nutrition for these energetic animals to attain bigger body sizes than any other time in their history.

“At Corral Bluffs,” Lyson says, “we were able to show some really interesting co-occurrences of new caloric rich food sources appearing on the landscape and the appearance of new and specialized and bigger mammals.” It’s part of an evolutionary relationship that continues to this day.

And it’s not just new finds in the field that are changing the picture. Paleontologists are going back to fossils residing in collections to learn new secrets about what mammals were doing during this critical time. That some mammals grew larger is obvious from the fossil record, but a Science study published earlier this year found that Paleocene mammals got big so quickly that their brains took millions of years to catch up.

Mammals running around during the early part of the Paleocene had brain sizes comparable to their Cretaceous ancestors, even as the range of mammal body sizes expanded. It was only about 10 million years after impact, during the Eocene, that mammal brains started to increase in size and complexity — perhaps because mammals had become so populous they needed to create new niches and evolve new behaviors. Much of the novelty that mammals evolved in the Paleocene doesn’t have a precise modern equivalent: “Paleocene mammals were goofy in really interesting ways,” dePolo says.

Some, for example, grew much faster than mammals of their same body size today. In another study published in Nature this year, dePolo and colleagues found that a roughly sheep-sized mammal called Pantolambda that developed for seven months inside its mother, was weaned within about two-and-a-half months and then grew to adult size fast. By ten years of age, it had already reached the end of its life.

“So much of the energy for Pantolambda seemed to be focused on the strategy of getting big fast and quickly reproducing,” dePolo says. This is like a fast-tracked version of what many placental mammals do today, and the ability to grow and reproduce quickly may help explain why Paleocene mammals underwent an evolutionary explosion.

Naturally, there are plenty of questions remaining. Mammal fossils from the earliest parts of the Paleocene are very rare, Lyson says, which makes tracking the early history of today’s mammals very challenging. On top of that, he notes, we don’t know much about how mammals bounced back in the Southern Hemisphere. As amazing as sites in New Mexico, Colorado and other places are, there are very few windows into this most critical time.

Even the basic biology of these animals has yet to be explored. “One of the things that constantly leaves me boggled while researching Paleocene mammals is the variety of anatomies and life strategies they explored,” dePolo says. This makes it difficult to find modern analogs to how mammals lived 65 million years ago. It’s clear that the beasts still have much to teach us about how life bounced back from one of the worst events in Earth’s history.