Contrast to what was commonly believed, tests on everything from turtles to lungfish reveal many silent creatures occasionally get vocal. 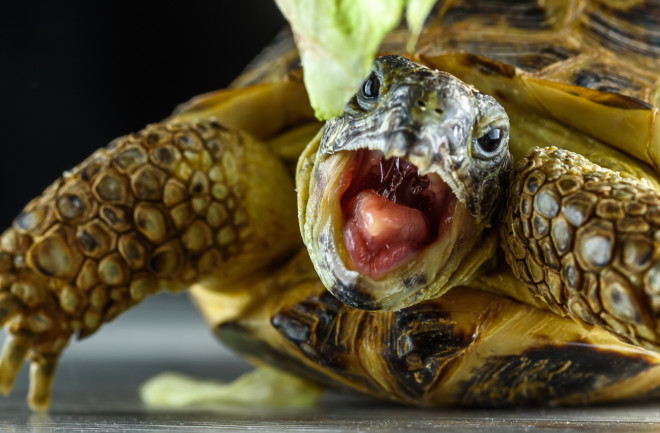 Turtles are pretty quiet animals. Other than some shuffling through the sand or munching on vegetables, you don’t expect to hear much from your average chelonian.

But new research shows that many turtles — along with nearly every other vertebrate species that isn’t a fish (plus a few that are) — use vocal sounds to communicate. “We realized that this behavior is quite widespread,” says Gabriel Jorgewich Cohen, a Ph.D. student at the University of Zurich.

While in the Brazilian Amazon several years ago, he heard the unexpected vocal sounds of giant South American river turtles for the first time. Baby turtles make these sounds before they even hatch from their eggs, using it to synchronize their hatching and better their odds of surviving the most dangerous first moments of life. “They have less chance of being eaten and they share the work of digging up [as a result],” Jorgewich Cohen says.

When he returned home to Europe, Jorgewich Cohen connected with a professor from another university to borrow a hydrophone — a device that can detect and record underwater sound — and used it on his pet sliders and tortoises. With some patience, he heard the animals vocalizing, albeit not very often.

When Jorgewich Cohen’s Ph.D. supervisor became excited as well, the two decided to ramp up this informal study.

Jorgewich Cohen traveled around Europe, visiting 10 different zoos, research labs and even private collectors to hear what their turtles had to say. “All of the recordings were made in captivity because we didn’t even know if the animals were making sounds,” he says. “If they were, we didn’t know the kinds of sounds they were making.”

In a study published recently in Nature, the team of researchers describe how 50 different chelonians communicate using some sort of vocal sound: “In fact, we never found any turtle that wasn’t producing sounds,” Jorgewich Cohen says.

In 2020, a study by evolutionary biologists Zhuo Chen and John Wiens hypothesized that “acoustic communication evolved independently in most major tetrapod groups, often with remarkably ancient origins.” The researchers also stated that while most four-footed animals communicate acoustically, most turtles, snakes, lizards, and tuataras — a reptile that looks like a lizard but is evolutionarily distinct — do not.

But Jorgewich Cohen began to doubt this conclusion. So, as he tested captive turtles around Europe, he also expanded his search outside of turtles.

Cacophony From the Silence

He listened in to tuataras and other species that researchers had previously believed to be silent; he listened to the Cayenne caecilian, a worm-looking creature that makes up the third major clade of extant amphibians along with salamanders and frogs, which Chen and Wiens had also stated were silent. Yet Jorgewich Cohen heard vocal sound. He even listened to a lungfish, a group of freshwater fish that breathes air similar to tetratpods. Again, he heard vocal sound.

“We got to a very opposite conclusion [from Chen and Wiens],” Jorgewich Cohen says.

Some of the sounds were very unique. The Belize turtle, for example, made sounds similar to those made by squeezing a rubber duck. The Cayenne caecilian, on the other hand, produced sounds more like burps and farts. “You have to pay attention to get those sounds,” Jorgewich Cohen says. “Most of them are not highly vocal.”

He and his colleagues then analyzed previous research on animal sounds — adding an additional 1,800 or so more species, including birds, reptiles, amphibians and mammals, to the 53 they’d tested themselves. It’s worth noting that the researchers were listening exclusively for sounds made from the vocal tract. In other words, they didn’t count things like the sound a rattlesnake’s tail makes, for example.

As a result of this arduous work, we now have evidence that about 90 turtles (from a total of roughly 360 known species) make vocal sounds. And the others just haven’t been properly listened to, Jorgewich Cohen says: “I’m pretty confident that every single species [of turtle] produces sounds, we just never check."

Contrary to the findings of Chen and Wiens, Jorgewich Cohen says his team’s findings reveal that all choanate vertebrates, those with lungs, likely share a common origin of sound that dates back at least 407 million years ago — the estimated time that a common ancestor between lungfish and tetrapods lived. “The hypothesis is that all choanates produce sounds through their vocal tract, which is moderated by the lungs,” Jorgewich Cohen says.

He also isn’t ruling out that sound may go back another step on the evolutionary tree to include Actinopterygii — a group that includes the ray-finned fishes and a huge number of living fish species. “Expanding our analysis to include actinopterygians may reveal the origins of acoustic communication to be even older than 407 [millions of years ago],” he says.

Wiens, however, now a professor of ecology and evolutionary biology at the University of Arizona, says the latest study is “a bit of a bait-and-switch.” While the common ancestor of lungfish and tetrapods may have been capable of making lung-based sound, he says the new paper “did not demonstrate acoustic communication in all these species.” In other words, not every sound means a species is communicating.

However, he agrees the demonstration that many of these animals make sounds is “a crucial step towards showing that they do communicate acoustically.” That communication, Wiens says, may be proved in follow up research.

Wiens also says the new findings aren’t inherently contrary to his previous study with Chen: “Showing that acoustic communication is even more ancient and even more conserved over time is not the opposite of our conclusions,” he says — if indeed Jorgewich Cohen’s theory is correct. Rather, it’s an open question about what drives the evolution of acoustic communication, and how communication might drive the creation of new species.

Now that we know at least some species previously thought to be silent use their vocal tracts to produce sound, scientists can begin to catalogue their specific characteristics. In the future, researchers might use these sounds to better survey for the presence of rare or endangered species, similar to the way some scientists use environmental DNA samples to detect bits of shed tissue or fecal matter from species now.

Read More: Scientists Are Vacuuming Animal DNA Out of the Air

The fact that so many animals produce sound also has implications for conservation. Biologists are well aware of the negative effects that ship traffic has on whale communication, for example. Even on land, Jorgewich Cohen says that the noise disruption of road construction is sometimes considered.

“Maybe we should consider this in the way we do conservation [for turtles],” he says.