These Octopuses Throw Objects, Sometimes At Each Other

Using their siphon, octopuses can shoot objects and debris, which is an unusual behavior for a non-human species. 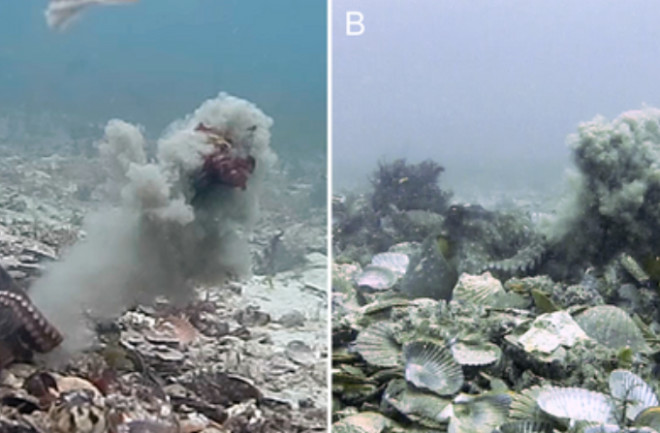 Panel A — Octopus (left) projects silt and kelp through the water; B – an octopus (right) is hit by a cloud of silt projected through the water by a throwing octopus. (Credit: Godfrey-Smith et al., 2022, PLOS ONE, CC-BY 4.0)

Grabbing a shell with its tentacles, an octopus takes aim and shoots the object through the ocean using a jet of water. Its target isn’t a threat or predator — but another octopus.

From 2015 to 2016, researchers observed an unusual behavior in groups of gloomy octopuses (Octopus tetricus) in Jervis Bay, Australia for a study recently published in PLOS ONE. The octopuses were throwing objects and debris, sometimes at one another, and the reason remains unclear. Researchers did determine, however, that this behavior in octopuses is deliberate and plays a social role.

“Wild octopuses project various kinds of material through the water in jet-propelled ‘throws,’ and these throws sometimes hit other octopuses,” say the authors in the study.

Octopuses are known for their anti-social behavior. According to the study, they hunt alone, fight other octopuses and can even cannibalize each other. But it’s rare for a non-human species to propel objects with aim.

Experts have observed some social mammals throw objects at targets, such as non-human primates, elephants, mongooses and birds, according to the study. They’ve even observed dolphins tossing objects between one another for play. But this is the first time researchers have observed this behavior often attributed to humans — in octopuses.

Across several days of footage, the study, led by Peter Godfrey-Smith and colleagues at the University of Sydney, records 102 moments where a group of about 10 octopuses threw debris. While both sexes threw objects, 66 percent of the throws came from females. Half of the time, the behavior started around mating attempts or arm probes with other octopuses.

To throw the debris or objects, the octopuses would move their siphon into an unusual position and release the object using a jet of water, according to a press release. Octopuses typically use the siphon — a funnel that can eject water — to swim and steer. When the octopuses would use the siphon to propel an object, they could throw it several body lengths away. Researchers think this is a deliberate act because the siphon is in such an odd position.

When throwing the objects, some octopuses changed the color of their skin to dark body patterns, which are typically associated with aggression. Octopuses with dark patterns had the most forceful throw and were more likely to hit another octopus.

Not all throws, however, hit other octopuses. The octopuses that did get hit would either duck, raise their arms at the thrower or alter their behavior.

While the researchers recorded this throwing behavior in this study, they do note that there is more to observe.

But discovering such an odd behavior in octopuses still shows that there is more mystery to this creature to uncover.