Rice-sized Brazilian amphibians land on their faces or backs when they jump, due to an evolutionary trade-off. 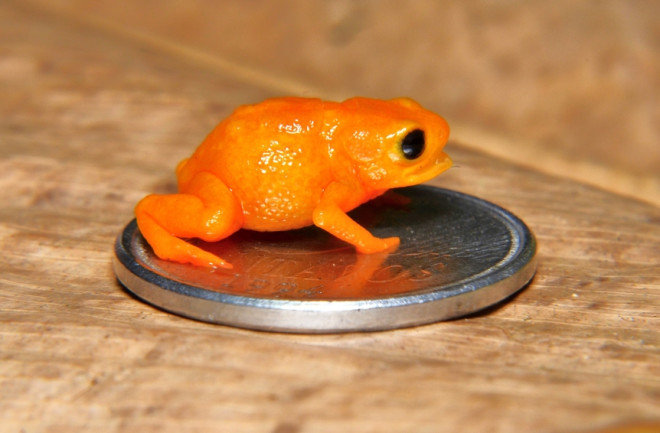 In the hills of Brazil’s Atlantic Rainforest, Ecologist Marcio Pie was ready to forsake his research expedition. Dozens of flea toads surrounded him but he could only hear their characteristic chirps when he stopped for 15 minutes and remained completely still.

These frogs may be the smallest vertebrates in the world, at roughly the size of a grain of rice. They are colored dark brown, the same color of the leaf litter they live under in cloud forests at high altitudes. And while their mating calls pack a surprising volume for something that small, they will clam up whenever they sense nearby footsteps, which might sound like an earthquake-like rumble.

“Once I fell asleep waiting for it to start calling,” says Pie, an ecologist at Edge Hill University in the United Kingdom. “Then it starting calling in my dreams and I woke up.”

When he did finally find flea toads, Pie observed something strange. They could jump like other frogs when frightened, but they couldn’t land well, often dropping on their faces or backs. “We noticed how extremely clumsy these frogs are,” Pie says.

In a recent study published in Science Advances, researchers analyzed why they lost their balance, running lab tests and CT scans of the frogs’ anatomy.

On average, it would take two researchers among Pie’s team roughly four to five hours to catch a single toad. “It’s really frustrating,” says Pie. “You can hear them calling, like dozens of them, and you just can’t catch them.”

So far, scientists have recorded 38 species of flea toads, but this number is growing. Pie says he has a paper currently in the works describing a new one. The genus lives in the Brazilian Atlantic Rainforest, a highly endangered and hugely biodiverse ecosystem that has lost huge proportions of habitat due to human development and activities in recent decades.

The frogs evolved on so-called sky islands, meaning they are only found at a certain elevation. Mountains and mountain ridges separated different populations for so many millennia that they evolved to become different species. Each new mountain or group of mountains has its own species, Pie says.

Experts only described nearly two-thirds of the 38 known species in the last decade — likely due to the difficulty in studying them. Pie himself has described several species previously unknown to science with colleagues.

Flea toads often differ from each other based on the color patterns on their skin — some of them are bright orange, giving another name: pumpkin toadlets. The International Union for Conservation of Nature considers six species as critically endangered. They also consider five as endangered, and another 10 as vulnerable. They consider 10 as data deficient.

Habitat loss is the main threat to nearly all these imperiled species. Most of Brazil’s human population also lives on or near the Atlantic Coast. This is a large problem with creatures with such small ranges.

“Many species — you can walk the entire geographic distribution of the species in one day,” Pie says.

Vertebrates use liquid that moves around in spiraling chambers in our inner ears, called the vestibular system, to sense balance. When we move our heads, the liquid shifts, sending signals that lets us know which way is up.

CT scans on flea toad specimens revealed that they have the smallest vestibular systems measured in any vertebrate known to date. Researchers compared these to the nearest relatives of the flea toads and found their balance system was significantly smaller — likely too small to work well.

Pie says that the researchers don’t yet know what the cut-off is for losing this sense of balance, though. The tiny toads are roughly one centimeter in length while their near relatives are about four centimeters in length and can maintain their sense of balance.

“Because they’re so small, the body plan of a vertebrate breaks down,” Pie says.

It’s possible that other miniature frog species known in Southeast Asia and Madagascar that sit between one and four centimeters in length have similar problems, though. Pie says that he hopes to examine these species’ using CT scans to compare them to Brazil flea toads.

Losing one’s balance isn’t ideal, especially when you jump high like toads. But it’s likely an evolutionary trade-off for the benefits they gained from becoming so small.

They have evolved in a way that they don’t develop like most amphibians — they hatch into their adult form directly from eggs rather than going through a tadpole phase. They have also lost many toes compared to their evolutionary relatives.

“Basically, they walk around the forest giving the middle finger,” Pie jokes.

The cloud forests are also so humid that they adapted to not need a body of water to lay their eggs in. Pie says that some of these adaptations may also make flea toads more vulnerable to climate change on the mountaintop cloud forests. Any changes in humidity could spell doom for these rice-sized, imbalanced toadlets.

But their tiny size allows them to exploit a unique niche under the leaf litter where they feed on mites and small ants, Pie says. This secretive habitat likely keeps the predators away — so they don’t need to jump a lot, instead relying on hiding under leaves.

“They are some of the most intriguing frogs I’ve ever studied to date,” Pie says. “There is so much more to study."