Turkeys Are Capable of "Virgin Birth"

And they aren't the only ones. Parthenogenesis, a natural form of asexual reproduction, is more common than you think. 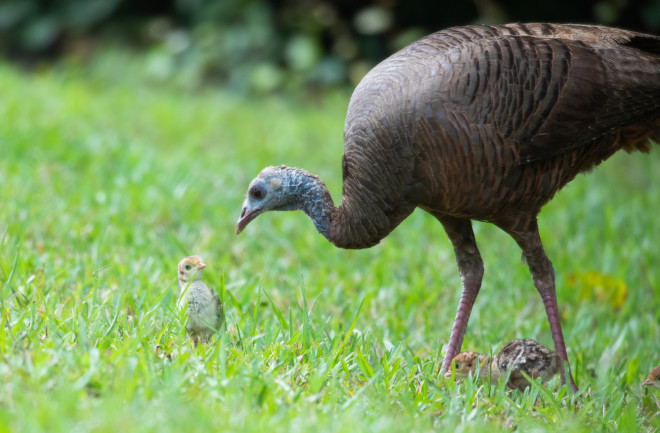 If you’re like most people, you don’t think about turkeys much until one shows up trussed and roasted on your Thanksgiving table. But turkeys are interesting animals. Wild ones, big as they are, spend their nights roosting in trees. They have excellent vision and can see in color. You can tell their gender from their poop (male turkey droppings are J-shaped). One of their neatest tricks, however, is that they’re capable of parthenogenesis.

Parthenogenesis literally means “virgin birth,” but it has nothing to do with the common conception of virginity — birds that have previously mated can do it too. Instead, it has everything to do with reproducing without sex. Parthenogenesis is the development of viable offspring from unfertilized eggs, no sperm necessary.

Thanks Dad, but Mom’s Got This Covered

It occurs less commonly in complex organisms than in simple ones — like wasps, bees and ants — but parthenogenesis isn’t quite as rare as you might think.

More than 80 vertebrate species reproduce asexually under certain circumstances and more are being discovered all the time. It’s relatively common among fish and lizards and snakes. Sharks can pull it off, too, on occasion. Turkeys aren’t even the only birds that do it, either. Pigeons, zebra finches and some quail have all been known to reproduce asexually.

Scientists at the California Condor Recovery Program, while studying the genetic diversity of the birds’ DNA, were recently surprised to discover that two of the female birds had produced live chicks (in 2001 and 2009) without the aid of a father. Both chicks died before becoming sexually mature, but this wasn’t surprising. When parthenogenesis does occur in birds, the young usually die before they hatch.

Why Skip the Sex?

Sexual reproduction has an evolutionary advantage over asexual reproduction. Mixing and matching two sets of genes create more genetic diversity in the offspring, which each inherit a unique combination of genes from its parents. This means that at least some individuals in the species are likely to have the necessary traits to survive should the environment change, making it more likely that the population as a whole withstands these changes.

A population produced by single parents wouldn’t be as likely to have traits that are useful should the climate change or a new predator or disease come to town. Still, in many situations, being able to go it alone is a clear benefit for a species. For one thing, it’s efficient. Organisms that reproduce asexually don’t have to take the time and risk of finding a mate. Asexual reproduction is also quicker and takes less energy. An animal that can reproduce without a partner can keep the species going when it finds itself in an area where there is no one to mate with.

Science doesn’t completely understand why parthenogenesis happens but, at least in birds, several factors seem to be able to set off the process. Changes in food, changes in temperature and certain viral infections have all been shown to increase the incidences of it.

Humans can’t reproduce asexually, of course. No mammal can — as far as we know.

This is because mammalian reproduction involves something called genomic imprinting: Genes are marked, or imprinted, depending on whether they came from the mother or the father. Some genes are activated based on which parent they came from. This means that if all of a person’s genes came from the same parent, some crucial genes would remain switched off and they would be unable to survive.

But a better understanding of parthenogenesis could help to advance research on assisted reproduction, the study of human reproductive disorders and how stem cells are produced. So this Thanksgiving, let’s thank the turkey for that.