For over 75 years, the clock and its keepers — who once included Einstein and Oppenheimer — reflect how close humanity is coming to the brink. 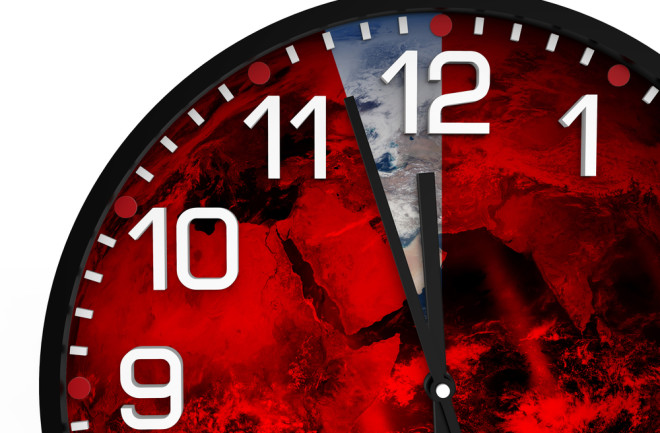 This article has been updated. Portions of this story were originally published on Jan. 20, 2022.

It’s almost midnight. It has been for over 75 years. And in 2023, humanity is closer to the brink than it has ever been.

That’s if you’re telling time by the Doomsday Clock, which isn’t an actual clock, of course. It’s a warning to humanity, a metaphorical countdown to existential midnight, the end of the world as we know it.

Created by the nonprofit Bulletin of the Atomic Scientists, the idea behind the clock is to remind the general public, policymakers and other scientists “how close we are to destroying our world with dangerous technologies of our own making,” and to advance discussions and ideas for reducing human-made threats to our own extinction, according to the organization’s mission. Every January, the Bulletin’s decision-makers convene to announce the clock’s new setting, if there is one (sometimes there isn’t).

When the Doomsday Clock was first conceived in 1947, nuclear weapons were the technology of greatest concern to the Bulletin, whose founders included Manhattan Project alums. Early leaders and contributors included some of the field’s most noteworthy names: Albert Einstein, for example, created the organization’s first board of sponsors. J. Robert Oppenheimer, known as “the father of the atomic bomb,” was the first chairman of that board.

Read More: What Is Time?

Oppenheimer also “advocated for an ethic that acknowledges both the social benefits and potential dangers of scientific advancement. Some of this advocacy he did directly in the pages of the Bulletin,” noted Bulletin president Rachel Bronson, in a recent statement.

Over time, other issues besides nuclear proliferation have helped inform the organization’s temporal deliberations. In 2007, for example, climate change first played a role in the setting of the hands (at five minutes to midnight). More recently, the Bulletin cited the COVID-19 pandemic as a new factor in determining the setting of the clock.

Over the years, though, the Bulletin has also moved the hands back several times, often in response to improved relations between super-powers, as evidenced by arms-reduction treaties. In 1991, the hands sat at 17 minutes to midnight, the furthest away ever, thanks to the end of the Cold War and the signing of the START treaty between the U.S. and the Soviet Union.

Since 2020, however, the Bulletin had kept the clock set at 100 seconds to midnight — as close as those metaphorical hands had ever come to striking 12. In a statement citing the pandemic, the Bulletin noted that “mishandling of this grave global health crisis is a ‘wake-up call’ that governments, institutions and a misled public remain unprepared to handle the even greater threats posed by nuclear war and climate change.”

But this year, the 76th anniversary of the clock, the Bulletin’s science and security board elected to move the hands 10 seconds closer to the brink than ever before: It is now 90 seconds to midnight.

“We are living in a time of unprecedented danger, and the Doomsday Clock time reflects that reality … it’s a decision our experts do not take lightly,” said Bronson, in a statement made during this year’s announcement. In addition to ongoing concerns about the threats of nuclear war and climate change, Bulletin leaders cited Russia’s invasion of Ukraine as a particularly compelling reason for this historical setting of the clock.

“The U.S. government, its NATO allies and Ukraine have a multitude of channels for dialogue; we urge leaders to explore all of them to their fullest ability to turn back the Clock,” Bronson said.

Over the decades, the Doomsday Clock has become an ominous fixture in popular culture, evoked in numerous songs, films, comics and other venues. Its annual settings are attended with a kind of fretful enthusiasm — a bit like Groundhog Day, if Punxsutawney Phil was the herald of nuclear winter, with no spring ever to come again.

Critics of the clock — and there are many, spread across both the political and scientific landscape — dismiss the whole concept as fear-mongering theater, not the sort of thing you’d expect from an organization created by scientists.

Historically, opponents have also taken the Bulletin to task for its methodology in setting the clock, which is seen as imprecise, difficult to quantify and even capricious. (Clock detractors like to point out that the initial 1947 setting, at seven minutes to midnight, was chosen merely because its original designer, artist Martyl Langsdorf, thought “it looked good to my eye.”)

Still, supporters and the Bulletin itself maintain that the clock is an iconic metaphor, “a reminder of the perils we must address if we are to survive on the planet,” according to the website.

Meanwhile, whether you want to keep your eye on it or not, the Doomsday Clock is ticking, closer to midnight than ever before, but still not quite reaching it. Yet.

How Effective Are Colonoscopies at Detecting Colon Cancer?