Social Media May Be Changing The Way You Communicate

While you can positively interact with social media, it can also negatively create feelings of FoMO and increase comparison. 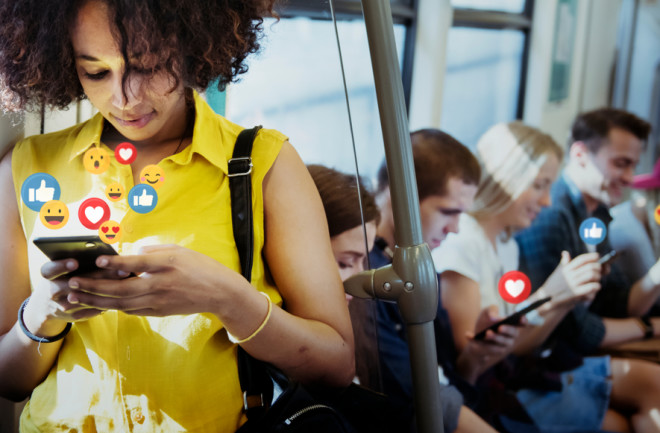 Scientists continue to study the evolution of language and how humans, plants and animals communicate. There are still many questions to answer, and social media poses a new question on how we communicate and interact today.

“Social media has really affected the landscape of social interactions in many different ways that are hard to define and hard to understand in terms of their downstream effects,” says Adam Stern, an assistant professor of psychiatry at Harvard Medical School.

It’s become a part of daily life for many, and Stern hears about issues relating to our online personas, how we interact in the real world and how the two intersect every day. Many people even sit at a table and gravitate towards their phones instead of communicating with each other.

Researchers and practitioners continue to try and understand how social media impacts us, including the pros and cons, while guiding us towards a positive use of this communication tool.

Read more: How Is Social Media Morphing Our Self-Image?

These applications are designed to keep us coming back for more. The positive reinforcement, or a surge of the feel-good hormone dopamine, can come with certain “minor hits of pleasure” in the form of likes, comments or followers, Stern explains. This can lead people to communicate more about their lives to experience the surge.

Yet, social media platforms allow us to connect in ways that weren’t previously possible. It was a lifeline for many people during the pandemic — particularly youth, says Linda Charmaraman, director of youth, media and wellbeing research lab at Wellesley College.

Social media makes it easier to feel like you’re in someone’s life, but Stern emphasizes this convenience can come at a cost. People can become less motivated to make the extra effort to maintain real world connections. A survey of almost 17,000 people from 18 countries revealed one-third of people communicate with parents, friends and partners less in the real world because they connect on social media. It might not be a surprise that we are becoming more distracted, enjoying in-person interactions less and having less quality social interactions when phones are present.

Researchers are also finding depressed individuals use social media excessively to cope with anxiety and other problems, since online social networking can be a less threatening way to communicate with others. This maladaptive coping strategy can lead to less offline interactions, which could affect one’s ability to cope with real world issues and lead to more problems with isolation, loneliness and worsened depression.

Charmaraman started studying the impacts of televised media on youth in the 2000s just as social media continued to emerge. Social media changed the idea that you can be the agent of your own reality and influence others, she says.

According to Charmaraman, social media can provide a positive experience if you actively use it to engage with others, meet new people with similar interests, raise awareness about issues you care about, learn something new from reputable sources or create meaningful content.

However, if you just passively scroll, social media can create a fear of missing out (FoMO) and increase comparison, Charmaraman says. A 2017 study published in SPSSI shows that passive users had lower levels of well-being. Though, passive use might have some positive impacts on interpersonal communication. A 2020 study published in Frontiers in Psychology found participants who passively used social media scored better at decoding nonverbal cues, versus active users, or those who posted more.

Another benefit to social media is more people are meeting online. A 2017 survey from Stanford University revealed that around 65 percent of same-sex couples, as well as 39 percent of heterosexual couples met online. The findings were compared to before 2013, when people met more frequently through one’s social network in real life. While you can meet new people online, social media can impact the quality of relationships by what we communicate – or don’t communicate – to our online audience. For example, having, or not having, a profile picture with a partner or making the relationship “Facebook official” can cause disagreements and influence how satisfied someone is with their relationship.

Before social media, you didn’t have these factors to think about because they simply didn’t exist. Similarly, if you weren’t invited somewhere, you might not ever find out.

“The online world makes it a way to know what you are missing out on,” Charmaraman says. Simply put, FoMO is more intense. A 2020 study published in the International Journal of Environmental Research and Public Health, revealed when a small sample size of 61 people abstained from social media use for seven days, their smartphone use and FoMO decreased.

There are also many reasons why face-to-face interactions are important. A 2013 study published in CyberPsychology found in-person communication creates stronger bonds and emotional connectedness, compared to digital communication. Interacting in real life helps develop social skills, too. Another study, published in 2014, found evidence that when a group of sixth graders spent just a few days away from screen media, they socialized more, could understand human emotion and recognized nonverbal emotional cues better than the group who had phone access.

Social Media is Here to Stay

During the Middle Ages, mainly religious leaders or aristocrats had the privilege of certain written information.Today, information is everywhere, and anyone can post about an array of topics.

“[Social media] has given a certain megaphone to people spreading misinformation or people who claim to be experts, but may not be,” Stern says. And it’s important to be mindful of where the information is coming from.

More research is needed to understand the long-term impacts of social media. To create a healthy relationship with the tool, it’s essential to think about what your goal – or your kids’ goal – is for using social media, Charmaraman says. Providing proper guidance for youth can lead to resilient use of these technologies.

Also, it’s healthy to limit your usage to a healthy level before it becomes maladaptive. If you aren’t sure if you are using social media too much, try decreasing your use and see how you react, Stern says. If you find this difficult, you might be more dependent on it than you realize.

Perhaps taking a break from the screen, going outdoors and having more face-to-face interactions with others would be beneficial – even for just a short time.

9 of the Best Holiday Tech Gifts