A Year Lasts 16 Hours on This Ultrahot, Jupiter-like Planet

The recently-discovered gas giant is the second hottest planet on record. It's also slowly spiraling into its own host star. 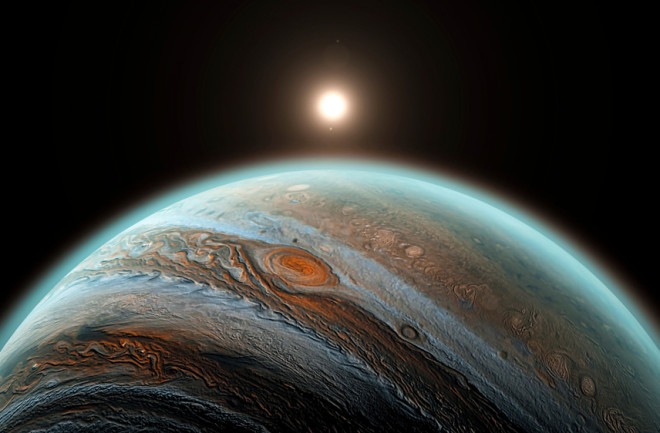 Gas giants like Jupiter (above) and the recently-discovered TOI-2109b are mostly made of helium and/or hydrogen. (Credit: 42videography/Shutterstock)

A newly-detected gas giant roughly 800 light years from Earth swings around its star so quickly that a year passes in 16 hours. The trouble is nobody would last long enough to get old even on TOI-2109b’s own terms — the Jupiter-like gas giant is blazing hot.

“The temperatures on this planet even exceed those of some stars,” says Ian Wong, an astronomer at NASA Goddard Space Flight Center in Maryland. “If you look at the whole planetary demographics that we’ve discovered in the past decade, we know that these hot Jupiters are pretty rare.”

Gas giants in general are pretty rare, but for scientists to have detected something so hot, so large and so close to its star is even rarer.

The Transiting Exoplanet Survey Satellite (TESS) is a telescope orbiting Earth that researchers use to discover distant solar systems. TESS was observing a star roughly 800 light years from Earth in the northern sky during the summer of 2020 when it detected a transit signal that occurred roughly every 16 hours. Transit signals occur whenever a planet passes between the star and the observer; in this case, TESS.

“Bells started ringing,” Wong says, adding that the signal was very robust. The scientists contacted both amateur and professional astronomers around the world to help hone in on the object for more Earth-based observations. They also gathered radial velocity measurements to determine the motion of the star in relation to Earth. When planets orbit a star, they also make the larger star move a little like a seesaw, Wong says. Researchers can track the speed of the star’s movement to determine the planet's overall mass.

The researchers found the gas giant is even larger than Jupiter — about 35 percent larger, they reported in a study published earlier this month in The Astronomical Journal.  In addition to its sheer size, TOI-2109b is also about five times the mass of Jupiter.

Beyond determining its size and mass, the scientists also studied how hot it gets on the gas giant. The researchers calculated the daytime temperature of the newly-discovered planet to be almost 4,000 degrees Celsius. This puts TOI-2109b as the second hottest planet we’ve yet discovered after KELT-9b. “As a community we’re only just beginning to understand how the physics and chemistry works on these planets,” Wong says.

Part of the reason it’s so hot is its proximity to its star. TOI-2109b is 20 times closer to its star than Mercury, the nearest planet in our solar system, is to our sun. It’s so close that it travels around its star every 16 hours. By comparison, a year on Mercury lasts 88 days.

The radius of the host star is also 70 percent larger than ours. “It’s a hotter and larger host star than the sun,” Wong says. “Both objects are scaled up relative to the sun and Jupiter.”

In fact, TOI-2109b is so close that it’s liable to get even closer in a relatively short period of time. The proximity and the strong gravitational interaction is slowing the gas giant’s overall momentum. “The orbit will gradually get closer,” Wong says, adding that astronomers have only discovered one other similar case of a “hot Jupiter” with a similar orbital decay. “It will eventually spiral into the host star in the next few million years.” He says that astronomers will keep a close on TOI-2109b to see if they can detect this slowing.

There’s still a lot we don’t know about TOI-2109b, including how it formed. Wong says the planet is unlikely to have initially come together so close to its star. The age of that star is hard to pin down, but it’s likely in the middle of its life, similar to our sun.

It’s possible that the star began farther out, but was pushed closer into orbit somehow. Astronomers haven’t detected other planets in this solar system, and it’s possible that any others might have been swallowed up by the star or flung out of the system when TOI-2109b moved so close. Wong says the research team is hoping to get more observation time for this star using the James Web or Hubble space telescopes to learn more about TOI-2109b and its solar system. “It would be very surprising if we found another planet in this system,” he adds.