The Perseverance mission captured sound with microphones for the first time on Mars. A new study reveals some surprising findings about these acoustics and sound behavior. 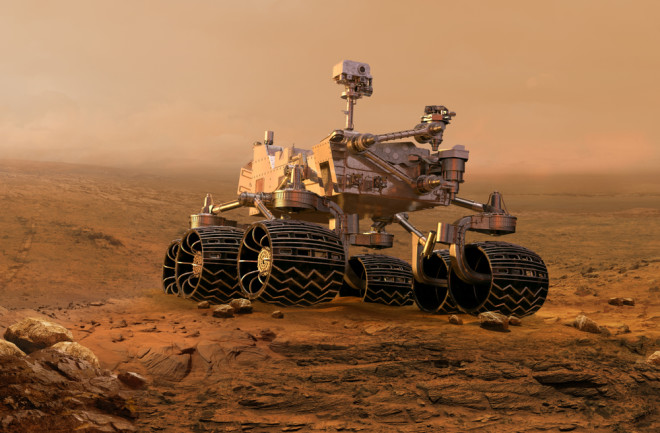 It’s been nearly 50 years since the Viking 1 lander snapped the first image from the surface of Mars. And yet, until recently, that landscape remained silent to the human ear. Now, thanks to two microphones aboard the Perseverance rover, researchers can tune in from more than a million miles away to probe the Red Planet’s alien atmosphere and unique sound propagation patterns.

Fields such as astronomy and astrophysics have long surveyed outer space using the electromagnetic spectrum — from gamma rays to radio waves and everything in between. By contrast, the acoustic exploration of the universe has only just begun.

Although we use sound waves here on Earth to map the ocean floor, infer wind patterns, track lightning, and accomplish other tasks, NASA has only ever equipped a few missions with dedicated microphones. The first bound for Mars in 1999 literally crashed and burned, and the second, launched in 2007, had technical issues. It wasn’t until early 2021 when Perseverance touched down that the researchers listening in could start to piece together the Martian soundscape. (Anyone can listen to the eerie audio recordings on NASA’s site.) They shared their findings in a study published on April 1 in the journal Nature.

It took some coaxing to convince NASA that the microphones were a worthwhile addition to Perseverance’s payload, says Baptiste Chide, one of the study’s lead authors and a postdoc at the Los Alamos National Laboratory.

Chide completed his Ph.D. in 2020 at the University of Toulouse with planetary scientists Sylvestre Maurice and David Mimoun, who collaborated with a team at Los Alamos to build an instrument called SuperCam. SuperCam is mounted on Perseverance’s mast and houses one of the rover’s two microphones; the other mic is located in a camera on the rover’s side. It was Chide’s job as a Ph.D. student to devise the scientific rationale that would persuade NASA that the mics were indeed a valuable asset. And the stakes were high: Chide’s entire thesis project hinged upon getting those mics into space. “It was a risky bet,” he says — but one that paid off.

Without the bustle of humans and animals, Mars is nearly silent, save the gusty wind. So, the SuperCam team also decided to analyze the sounds coming from their own scientific equipment.

Part of SuperCam’s job is to zap nearby rocks with a laser and record the acoustic and optical signals that reverberate back, in order to determine hardness and chemical composition. The mic was also able to pick up farther away sounds, including the whir of the blades on NASA’s Ingenuity helicopter — the first aircraft to make a powered, controlled flight on another planet.

Based on the noises coming from the laser and the helicopter, the researchers were able to determine that the speed of sound is much slower on Mars than it is on Earth. Moreover, different frequencies travel at different speeds. On Earth, sounds typically disperse at about 767 mph. On Mars, however, high-pitched sounds move at 559 mph and low-pitched ones move even slower at 537 mph. A similar phenomenon occurs on Earth as well, but only at frequencies outside our hearing range, so we don’t usually notice the discrepancy.

Chide says that this difference in speed between low and high frequencies would be most apparent at long distances. If you were to attend a concert on Mars, for example, and stand a few hundred feet away from the stage, you would receive the high frequencies a few milliseconds before the low ones, which would lead to sound distortion. The band would also have to play quite loud in order for the music to reach you because sounds on Mars don’t carry nearly as far as they do on Earth.

These otherworldly acoustic patterns are due to the peculiar atmosphere on Mars. Unlike Earth’s atmosphere, which is primarily oxygen and nitrogen, the Martian atmosphere is 96 percent carbon dioxide (CO2), and extremely cold and thin. This combination of factors causes the CO2 molecules to vibrate in such a way that they absorb higher-frequency sounds, preventing those noises from traveling long distances.

Given that temperature has such a drastic effect on sound propagation, Chide and his colleagues suspect that the speed of sound on Mars will vary by season and even time of day. As the dust storm season approaches, the researchers anticipate their microphones will detect additional wind and temperature changes. SuperCam’s mic has unprecedented sensitivity, and can detect pressure fluctuations at scales 1,000 times smaller than ever before recorded on Mars. As a result, the mic can sense tiny eddies of wind called “micro-turbulence,” which whisk up dust — sculpting the planet’s surface, mixing chemicals and aerosols in the atmosphere, and controlling the temperature by absorbing solar radiation.

Prior to these sound recordings (which totaled just under six hours), models of the Martian soundscape were purely theoretical and offered conflicting predictions. Andi Petculescu, a physicist from the University of Louisiana at Lafayette who studies acoustic properties of planetary atmospheres and was not involved in the research, considers the new study to be “a breakthrough” that will help develop more consistent acoustic models.

Given that the cold, thin, CO2-rich atmosphere renders Mars acoustically “unfriendly,” Petculescu was impressed that the researchers were able to obtain such clean signals from their microphones. He advocates equipping future spacecraft with acoustic sensors in order to learn more about the sound properties of other atmospheres. For example, Saturn’s largest moon Titan has a denser atmosphere and a wealth of background noises to record, including methane rainstorms. In 2027, NASA is scheduled to launch its Dragonfly mission, which will carry two microphones on its meteorological experiment, complementing previous recordings from the Huygens Probe.

“The study of acoustics is coming of age in planetary science, and we are learning new things about the way sound propagates in different atmospheres,” explains Roger Wiens, a co-author on the recent study and principal investigator of SuperCam.

The physics of sound will be important to understand in advance of humans setting foot on the Red Planet, he adds, in order to deduce information like wind direction and speed — and even gauge the health of scientific instruments by listening to the sounds they make as they operate. When humans finally get there, we’ll likely have to use devices like radios to communicate because sound won’t travel very far. As Wiens puts it: “You can't yell to somebody at the other side of the block.” Not to mention, you’d be shouting from inside your space helmet.