From snake bombs to mosquito armies, biological warfare dates back to ancient empires. Even though they sometimes backfired on their users — and caused many more deaths than intended. 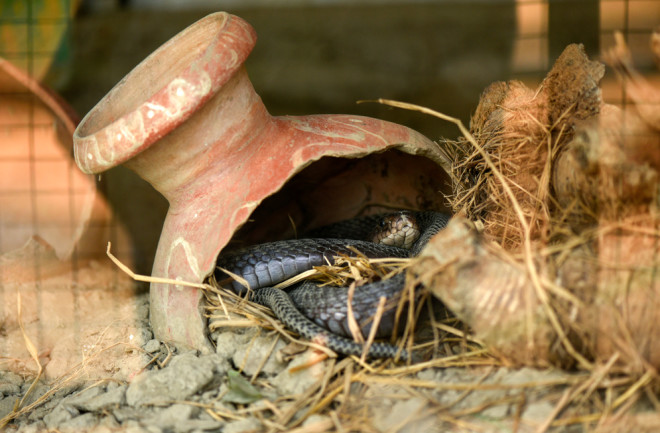 Biological weapons may seem like relatively modern entrants into the bloody history of human conflict, and why not? The term itself wasn’t coined until the 20th century, entering the lexicon during the horrors of World War I. Its shorter synonym, bioweapon, didn’t even appear in dictionaries until the 1960s.

Today, the United Nations describes biological weapons as devices or methods that “disseminate disease-causing organisms or toxins to harm or kill humans, animals or plants,” as chillingly succinct a definition as anyone would care to have.

But the concept of biological warfare is indisputably ancient — and as weapons of mass destruction, bioweapons of centuries past were just as terrifying to soldiers and civilians then as their modern equivalents are to us today.

A surprisingly wide variety of bioweapons were available in the ancient world. After all, arrows and spears technically became bioweapons the moment their tips were dipped into poison, excrement or even simple, microbe-rich dirt. Infected and putrefying corpses, whether animal or human, were readymade bioweapons when dumped into an enemy’s water supply or launched over a city wall, bringing dismay as well as disease.

Some military leaders of the past were more diabolically creative than others in their waging of biological warfare. They didn’t understand the science behind the methods they deployed; they just knew what worked.

But because history’s biological warmongers didn’t fully comprehend (or control) the forces they wielded, their ancient bioweapons often had unintended consequences, doing their own people harm, and sometimes causing catastrophic collateral damage that stretched around the globe and across the centuries.

The Hittite empire originated around 1600 B.C. in what is now Turkey. Their domain was sizable, with the empire becoming a significant power in the Middle East. They are mentioned frequently in the Bible — in the Old Testament, they were said to be powerful neighbors to King Solomon. To their credit, history records that the Hittites, along with Egypt, signed one of the first known peace accords, the Treaty of Kadesh. But the Hittites may also have the dubious honor of engaging in one of the earliest examples of biological warfare.

Some researchers allege that around 1320 B.C. the Hittites released infected rams and donkeys along a trade route used by their enemies, who brought the strays back to their villages. Along with the animals came tularemia, a bacterial disease that, though treatable now, caused significant disability and death in ancient times.

Intended to weaken only their enemies, the so-called “Hittite Plague” had wider ramifications, triggering an epidemic that spread from Cyprus to Iraq and from Israel to Syria. Even today, tularemia is considered a serious biohazard and was once stockpiled by both the U.S. and the former Soviet Union as a potential biological weapon.

The Pontine Marshes historically inhabited more than 300 square miles to the south and east of Rome. They created a natural impediment to invading armies, and not merely because marshland offers an exhausting, unrelenting slog for men on the march. The Pontine Marshes’ greatest asset was that they were home to ancient Rome’s most devastating army: malaria-inducing mosquitos.

Although they were well aware of the marshes’ ability to sap the strength of an invader, the Romans didn’t actively weaponize malaria. In ancient times, they had no way of confirming that mosquitos were the delivery system for the devastating ailment.

Indeed, they blamed the condition on the noxious atmosphere of marshy areas — when the disease was eventually named, malaria was derived from the Italian words that literally meant bad air. Malaria proved a formidable biodefense for centuries. Even the great Hannibal (who deployed creative bioweapons of his own) was thwarted by the disease.

Still, perhaps those marshes were too formidable: As time went on, malaria became an endemic threat to Roman citizens and may well have contributed to the downfall of the empire. By the 20th century, various efforts to drain the marshes had mitigated the disease. But during World War II, the German army, mindful of history, flooded the marshes once more. They turned the marshes again into a bioweapon barrier, this time to obstruct the advance of Allied forces. But the ploy also impacted Italy itself, causing a malarial outbreak in the region in 1944.

One of the greatest foes that ancient Rome ever faced, Hannibal of Carthage, possessed a tactical and martial genius that made him an enduring legend. It's true that he was ultimately defeated and took his own life. Nevertheless, people remember Hannibal for his daring, which sometimes seemed to border on insanity.

One of his most epic feats involved advancing on Rome by crossing the Alps. And he did this with no fewer than 40,000 troops, thousands of horses and about 40 trained war elephants. Talk about biological weapons.

Alas, after an impressive run on northern Italy, Hannibal was defeated, spending his waning years working for other powers that might make use of his military intellect. Thus it was that, around 184 B.C., Hannibal ended up in what is now modern-day Turkey, in a war between Bithynia and Pergamon. Fighting for the outmatched Bithynians, Hannibal commanded their navy. In an era before cannons, Hannibal attacked his enemy — whose fleet included the king’s own ship — with a different sort of bombardment.

In De Viris Illustribus, an early biographical collection of the lives of “illustrious men,” scribe Cornelius Nepos (c. 110-24 B.C.) relates that Hannibal ordered his men to gather a large number of venomous snakes, which were placed into clay pots. Nepos’ account is fuzzy on how exactly Hannibal managed to gather enough snakes (and pots) to mount an effective defense against a fleet of 400+ enemy ships, but never mind.

History records that Hannibal launched his snake bombs, paying special attention to the king’s ship. The king’s nerve failed, he fled with his navy, and Hannibal once again left his mark in the annals of military history.

Over the course of history, plenty of armies hurled the bodies of dead animals and people over city walls to harass their enemies. Manure — of both the human and animal varieties — was a popular bioweapon to throw at besieged opponents, too. But the Mongol army has dubious pride of place for using the technique, with world-changing consequences.

Around 1346, during the siege of Caffa, the Mongols reportedly flung corpses over the walls, corpses that were infected with bubonic plague — the Black Death.

Unfortunately for Caffa, and at least — at least — 25 million other people, Genoese traders brought the plague from Caffa to Europe, delivering a disease that swiftly killed 70 to 80 percent of its hosts. Even worse, plague outbreaks would recur several times over the next five centuries.

Although treatable today with modern antibiotics (if treated quickly), plague remains a serious bioterrorism threat, according to the Centers for Disease Control and Prevention. Some bomb blasts continue to reverberate through the ages.

What Happens When Scientists Put a Human Intelligence Gene Into a Monkey?