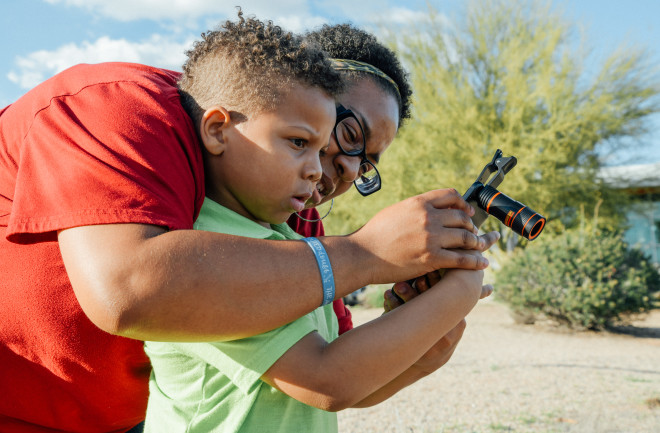 Each April, with support from the National Library of Medicine, SciStarter, in partnership with Arizona State University, hosts Citizen Science Month, a one-of-a-kind celebration of citizen science that includes events hosted around the world, thousands of participants and hundreds of thousands of new contributions to citizen science projects. Citizen Science Month 2022 featured collaborations with the National Science Foundation, PBS, NASA and others.

“Citizen Science Month is the most exciting time of the year for SciStarter and citizen science, and I’m so thrilled to see people around the world taking part in projects, learning more about their world and making a direct impact on scientific research and discovery,” says SciStarter founder Darlene Cavalier. “We had so many great events this year covering a huge diversity of topics, and I can’t wait to see what next year brings.”

Citizen Science Month 2022 featured 114 different events reaching hundreds of thousands of people, both online and in-person, and including people and projects from around the world. That included events from partners like All of Us, who hosted several webinars on specific topics during April like Celebrating Women in Science with All of Us California, and the National Citizen and Community Science Library Network, who highlighted pollinator protection with My Garden of a Thousand Bees. Through these events, people learned about new projects and ways to connect science to their own lives.

Our social posts during the month, which included a takeover of the NSF Twitter account, reached more than 690,000 people! Our free resources for project and event leaders, including the Foundations of Citizen Science tutorial, booklists, training webinars, printable and online graphics, logos and stock photos were downloaded 18,947 times — almost 4,000 more downloads than in 2021.

In partnership with PBS Books and PBS NewsHour Student Reporting Labs, SciStarter also presented Benjamin Franklin and Citizen Science: Sharing Stories of Collective Impact. Audiences watched the trailer for the new Ken Burns documentary on Benjamin Franklin, and heard from real-life scientists and PBS Kid Reporters talking about science in their communities. Participants were introduced to the life of the Founding Father and lifelong amateur scientist, and presented citizen science projects that anyone around the country can get involved in.

“I think of Ben Franklin as one of America’s first citizen scientists — he was curious, committed and always exploring new things,” Cavalier says, “And he often crowdsourced his discoveries. Today, there are so many ways to tap into your own curiosity through citizen science!”

Another great event came from Unique Mappers Nigeria, whose Land Pollution Lookout project enlists citizen scientists to monitor oil spills in Africa’s Niger Delta, through online interactions. The project was able to assess and validate 1,500 images of potential oil spills in just over eight days thanks to more than 250 volunteers who took part. All that work paid off as the team identified 81 oil spills in the Niger Delta, providing scientists with valuable information on a dangerous environmental hazard.

“The project is worth it, thank you Unique Mappers Team Nigeria for collaborating to provide data on oil pollution in part of the Niger Delta region in Nigeria,” said participant Chukwu Kingsley Chika. “I am happy to be part of the solution, and I would like to be part of it anytime.”

SciStarter also heard from participants on our website, who shared the projects they got involved with during Citizen Science Month, as well as what they learned. “I introduced my son to the NASA Globe Clouds project,” said SciStarter user Michelle Moore. “We just started the iNaturalist photography of nature together and we are bonding over nature, science and photography! Best moment so far has been identifying the bird that sits outside of our window.”

It’s Never Too Early to Plan for Next April

Anyone can plan a citizen science event and engage people of all ages in real scientific research — and on SciStarter, you can add or find a citizen science project, event or tool any time of the year, not just in April! Resources from April are still available, and to stay in the loop about upcoming support for 2023, be sure to join SciStarter.org.

Eagles vs. Chiefs: The sky is the limit!

How to Play in the Snow…For Science!