The fungus from “The Last of Us” may seem scary, but in reality, it’s not a threat to humans. 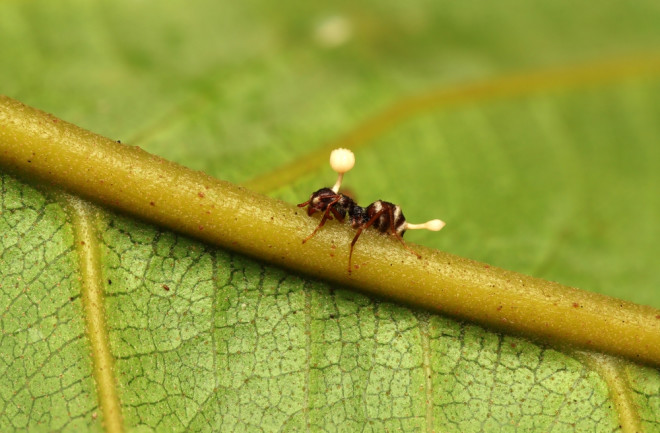 Dead ant with spores from fungus on top of its head. (Credit: Rezamonium/Shutterstock)

In HBO’s new hit video game-turned-TV show The Last Of Us, a mutated fungus from the genus Cordyceps begins infecting humans, turning the majority of humanity into zombie-like, cannibalistic monsters.

In reality, Cordyceps fungi do exist, and one type does infect certain species of ants, taking complete control of its host and dictating its every move. But how does this parasitic fungus work? And could it ever infect humans like it does in The Last of Us?

The cordyceps fungus, or more specifically, Ophiocordyceps unilateralis, is often referred to as the “zombie-ant fungus.” It is predominantly found in tropical forest ecosystem, such as the Amazon Rainforest in Brazil.

Complex imaging of infected ants’ cells has revealed a lot about how the zombie-ant fungus works. Entomologist David Hughes and his team at Penn State University conducted the imaging and found that when the fungus first enters its host, it exists merely as single cells that float around the ant’s bloodstream.

Read More: They're Ants That Collect Skulls. Now We Know How And Why.

The imaging process was not easy. Maridel Fredricksen, one of Hughes’s students, used a special microscope to cut infected ants into slices that were about the width of a thousandth of a human hair, according to an article from The Atlantic. The team then scanned and compiled each slice into a 3D model. It took over three months to scan one ant muscle.

However, the results were worth it. Imaging revealed that after floating around the ant’s bloodstream for some time, O. unilateralis cells begin to connect to each other via short tubes, all to communicate and share nutrients. The fungus will also breach an ant’s muscle cells, either by growing through them or encircling them.

But the O. unilateralis does not manipulate the ant’s brain in any way. Hughes’s team found that the fungus infiltrates the ant’s entire body, including its head, but leaves the brain untouched. The fungus can control the ant by simply infiltrating its muscles.

Once the fungus has taken over the ant’s body, it will trick the insect into leaving its nest and climbing up a nearby plant. According to The Atlantic, the fungus stops the ant at a height of approximately 25 centimeters, which is where the correct temperature and humidity allows the fungus to thrive.

In its final stage, O. unilateralis will force the ant to bite down on a leaf and remain in that position. After that, the fungus will begin growing spores out of the ant’s head, directly above the ant’s colony. It will then release the spores to rain down on any other unsuspecting victims below.

Risk of Infection to Humans

While this fungus may seem scary, the reality is that it cannot infect humans. However, that doesn’t mean that other fungi aren’t a risk to us.

According to a 2015 study published by the National Library of Medicine, among the millions of fungal species on Earth, few possess the four qualities necessary to infect humans. Those four qualities are high temperature tolerance, the ability to invade a human host, lysis and absorption of human tissue and resistance to the human immune system.

For most fungi, infecting the human body is an extremely difficult task. Fungi likely evolved their pathogenic repertoire long before ever encountering humans, making their attacks ineffective against the human body.

While it is possible that more fungi could evolve to infect people in the future, it’s impossible that we’ll have any situation like The Last of Us on our hands any time soon.

A New History For The Tropical Forests Of The Americas

What You Should Do If You Encounter A Bear