From finger amputations to blindfolded funerals, people have found some creative ways to say goodbye to their loved ones. 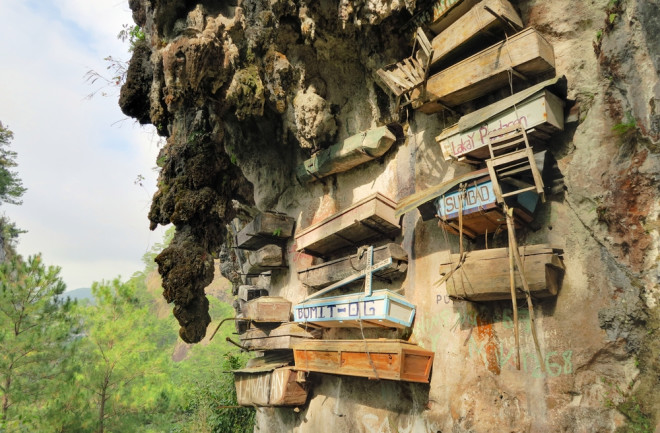 Grief often accompanies the loss of someone close and can be a difficult process.

“When an individual passes away, they leave a hole not only in our hearts but also in our social networks, in our family lives, in our village, or town or community,” says Shannon Lee Dawdy, professor of anthropology at the University of Chicago.

But what can we do with this gaping hole? For many, hosting a funeral or participating in a death ritual to say goodbye to the deceased channels this grief. Funeral rituals allow people to come together and not only acknowledge their loss, but also come to an understanding of how to go on and re-weave the social fabric, explains Dawdy. Death rituals are much more than just for healing individually; they also allow different communities to unite and fix rips or tears in their social fabric in their own ways, she says.

Cultures around the world have a distinct set of beliefs that guide their funeral rituals. Let’s take a closer look at five unique traditions that celebrate and honor the departed.

1. Endocannibalism: Feasting With the Dead

The earliest instances of cannibalism date back to over 800,000 years in Spain’s Atapuerca Mountains. Anthropologists think early hominids likely used it as a territorial defense strategy. But today, anthropologists find cannibalism is used for more than just survival purposes.

The Wari people of Brazil and the Fore tribe in Papua New Guinea are two examples of tribes that consume deceased community members as a religious or cultural practice. Feasting on the dead is a way for the Wari tribe to socially mourn. They believe the funeral rites allow their ancestors to transform from humans to spirits, and the feast allows an individual to release painful memories that can linger after a loved one’s death.

For the Fore tribe, the cannibalistic tradition calls on women and children to consume the flesh of Fore members. Everything except the gallbladder is removed from the dead body. The remains are mixed in with ferns and cooked in tubes of bamboo that women and children both prepare and consume. While the act is viewed as a symbol of love and grief mixed together, medical researchers have discovered that many Fore tribe members may be victims of a fatal degenerative disease called kuru due to their cannibalistic practices.

For the women of the Dani tribe in Papua New Guinea, cutting off the top of their finger in a funeral ritual to mourn the loss of a family member or loved one is a cultural norm.

While it’s unclear why the ritual mainly involves women, the ritual, called Ikipalin, is a way for women to physically display their grief. The practice involves tying a string tightly around the upper part of a finger for 30 minutes. This allows the finger to become numb and prepares it for removal. Then, an ax is used to remove the upper half of the finger and the open wound is cauterized, to avoid further bleeding and infection.

The ritual is rooted in religious beliefs that suggest finger-cutting can ward off the deceased person’s restless spirit. Though the Indonesian government recently banned the practice for all tribe members, the aftereffects of the mourning ritual can still be seen on the hands of many older women of the tribe.

The deceased are cleaned, blindfolded and tied to a chair, which is then placed in the main entrance of a home. The hands and legs are tied together to keep the body in a sitting position for eight consecutive days.

During those eight days, the elders perform a bangil rite, which involves the reading of a biographical chant of the deceased. The mourners also strike bamboo sticks together to ensure that their loved one reaches heaven. The reason why the deceased sits in a chair is so that when they are removed, they can rest in the fetal position.

Though the funeral practice of hanging coffins dates to over 2,000 years ago, the Igorot people of the Philippines still practice this ancient burial custom today.

For the tradition, one carves out their own coffin from hollowed logs. The coffins have various intricate designs that represent fertility and longevity. Upon death, the deceased are placed inside their coffins and then hung off the side of a cliff or cave.

The height of the hanging coffin represents the status of the individual. Typically, male community leaders or distinguished members of society are placed higher on the cliff. According to the community’s beliefs, the higher the dead are placed, the greater their chances are of reaching a higher position in the afterlife.

Today, the hanging coffins can primarily be found in the town of Sagada, though many have deteriorated and even fallen over time. Various cultures in China and Indonesia have also practiced hanging coffins.

A shortage of burial space encourages a new funeral practice in South Korea. People are transforming a loved one’s ashes into shiny colorful beads. “Death beads” have been growing in popularity since the early 2000s as a way to honor and keep the deceased nearby. A law passed in 2000 now requires anyone in South Korea burying the dead to remove the grave 60 years after burial, which could influence the new practice.

Bonhyang, the death bead company founded by Bae Jae-yul, features beads that range from blue-green to pink, purple and black in color. Ultrahigh temperatures melt and crystallize cremated ashes that are stored in shiny beads, and the process takes just 90 minutes. Instead of wearing the colorful beads as jewelry, many opt to display them inside glass containers in their homes, where they are accessible to the whole family.