Because adults need to have fun with science, too. 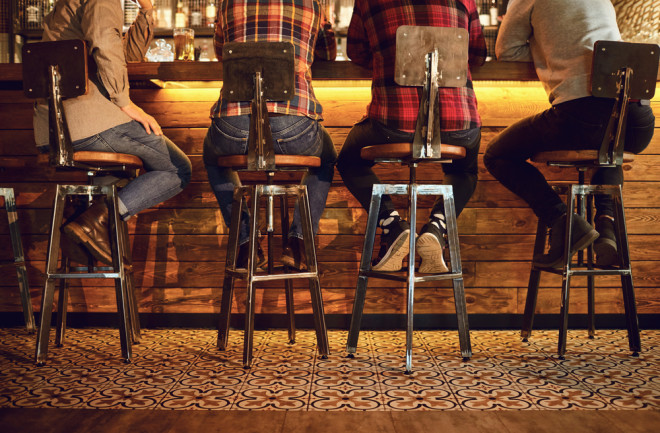 The Science Near Me blog is a partnership between Discover magazine and ScienceNearMe.org.

Move over, trivia. Here's a new idea for your next night out: A science café. So grab your friends and call the sitter, because somewhere near you there’s an opportunity to nerd out and be entertained — adult beverages optional.

Fun with science and opportunities to engage your brain shouldn’t be just for kids. Luckily, there are plenty of ways for us adults to stretch our brains and enjoy a good time. On ScienceNearMe.org, your one-stop shop for science activities, events and programs, you can now use the “21+” filter to find events made just for adults.

Search now: Opportunities for Adults on Science Near Me!

One of the most prominent types of events you might find is the Science Café. At these events, members of the public gather at a local bar or other venue and listen to presentations from scientists. But these are no dull classroom lectures — they’re casual, fun and expertly crafted to be understandable for whoever might happen to walk through the door. Many events are free, while others may require a cover charge or ticket purchase. A token or ticket for a free drink at the bar is a definite possibility.

Here are just a few examples of organizations across the country currently hosting science cafés and other science-themed events for adults!

Nerd Nite Near Me

A great way to make your night out a little more interesting is to attend a Nerd Nite. We asked the Big Boss of Nerd Nite, Matt Wasowski, what it was all about. We’ll let you hear it from him:

“For the uninitiated, in its simplest terms, Nerd Nite is a monthly event held in a non-academic venue (think music venues, art spaces, breweries, warehouses, etc.) during which three usually-emerging experts each give an 18-to-21-minute long fun-yet-informative presentation while the audience drinks along. And the drinking-along part is just as important as the presentations since we've always believed that creating an informal atmosphere for nerdery is key.

Nerd Nite started in 2003 as a lark at a rockabilly bar in Boston as a way for [founder] Chris Balakrishnan to talk about his travels to Cameroon to study a bird during grad school, and somehow became a worldwide event series that, pre-pandemic, held monthly events in more than 100 cities on six continents.

While one could probably find a way to more formally learn about the Science of the Simpsons, the first vaccine or gonorrhea, it's much more fun to learn when out with a few friends, around like-minded peers, while having a drink. Tone and spirit are everything. We don't take ourselves too seriously, don't dissuade swearing or toilet humor and love to toast our audience.

Each Nite around the world is run by volunteers. We've even rejected outside investment because we don't want to be beholden to anyone. It's just us; a merry band of curious people who enjoy each other's company, a few beers and learning about new subjects presented to us in a quirky manner.

As we head into our third decade, our mission remains to simply be about teaching people random things in an informal, hopefully enjoyable, manner. That impossibly-simple formula has worked so far, so if it ain't broke, let's not break it. Cheers!”

There are a number of Nerd Nite events already scheduled across the country for June — June 9 in Miami, June 15 in San Francisco, June 22 in Los Angeles and June 30 in Louisville — with more to come. Many meet monthly on the same day of the month at a local bar or pub. Nerd Nite perhaps puts it best on their website: “Be there and be square.”

Another great opportunity to add a little learning to your next night at the bar is Astronomy on Tap. Like Nerd Nite, you’ll find local experts at the event, but this time they’ll be astronomers talking about black holes, what it would really take to live on Mars or some recently revealed secret of the solar system.  Here’s how co-founder Emily Rice describes it:

“Astronomy on Tap is a loosely coordinated, worldwide organization of public outreach events featuring presentations about astronomy from professional scientists, educators and more, at bars and other social venues. We started in NYC in April 2013, after Dr. Meg Schwamb (then a postdoc at Yale) organized two “Astronomy Uncorked” events at a wine bar in New Haven, before I helped her bring a similar event to Brooklyn and rebrand as Astronomy on Tap.

Last May the fourth, Astronomy on Tap San Antonio hosted a science of Star Wars event. Here, Dr. Angela Speck, astrophysicist at the University of Texas at San Antonio, shares what’s actually required to obliterate a planet and what the movies did and didn’t get right, while sporting an awesome R2D2 dress. (Credit: Dr. Christine Ray on Twitter @ItsChristineRay)

Last May the fourth, AoT San Antonio hosted a science of Star Wars event. Here, Dr. Angela Speck, astrophysicist at the University of Texas at San Antonio, shares what’s actually required to obliterate a planet and what the movies did and didn’t get right, while sporting an awesome R2D2 dress. Photo and caption from planetary scientist Dr. Christine Ray.

Typical events include two or more short-ish presentations (15-20 minutes) with lots of time for questions, plus trivia, games, prizes, news, music and other fun things. AoT provides a relatively informal venue for scientists to share their expertise and experiences with the general public, while being honest and getting creative. Several satellite AoT organizations have even adapted to their communities by having events in different languages (Spanish, Mandarin, French, German, etc.) and with different types of professionals (scientists, educators, astronauts, amateur astronomers, actors, musicians, artists, etc.).”

The next Astronomy on Tap is June 9 in Chicago, but be sure to check back soon for more dates and locations! And don’t forget other science café organizations that might have events near you, like Pint of Science, Science on Tap, Biology on Tap and yes, even science-themed trivia nights.

Not every opportunity for adults to enjoy science is at a bar. Science centers, museums, planetariums and more will often host events for adults! For example, on June 9, the Emerald Coast Science Center in Fort Walton Beach, FL, is hosting The Sordid Secrets of the Stars. Book your seat in the science center’s planetarium for an adventure through Mesoamerican legends and myths of the constellations. As the science center puts it: “Much like all our Sordid Secrets, this is an adult event, as those Mayan, Incan and Aztec gods definitely didn't keep things rated PG!” (And yes, there’s beer and wine available, too.)

Whatever your interests and ideal venue, more and more events are cropping up every day. So next time you’re looking for fun things to do, look to see if there’s a science event for adults near you, and be sure to check back often!

Search now: Opportunities for Adults on Science Near Me!

If your organization has a science opportunity to share, be sure to add it to Science Near Me! We’d love to share your event, opportunity, activity or camp with our community.