The Dusty Days of Summer on Mars

On the Red Planet’s southern side, summer began on July 21. For scientists, that means another perplexing dust storm season. 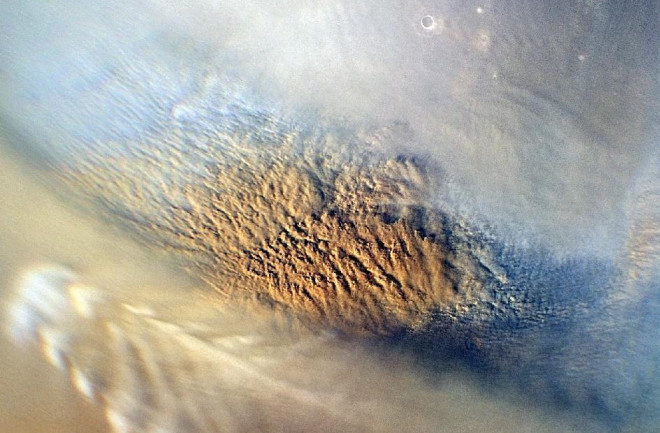 A close-up image of a dust storm on Mars (acquired by the Mars Color Imager instrument on NASA's Mars Reconnaissance Orbiter) on November 7, 2007. (Credit: NASA/JPL-Caltech/MSSS)

The weather on Mars is dusty — especially during the southern hemisphere’s spring and summer, when warmer temperatures produce stronger winds that stir the surface. Spinning columns of air known as dust devils are common, too, propelling dust much higher into the atmosphere, where it can stay suspended for days. The most extreme storms happen every few years and shroud the entire planet in a haze for months.

Scientists are still not sure what causes these global dust storms. In a recent study, however, researchers showed that Mars experiences a large energy imbalance at the same time major dust storms develop. The results reveal that the Red Planet absorbs up to 15 percent more solar energy than the thermal energy it emits back to space during southern spring, an excess of energy that continues into summer.

“Mars experiences intense variations in the amount of solar flux as it’s going around the Sun,” says lead author Ellen Creecy, an atmospheric scientist at the University of Houston.

This happens because Mars’s orbit is elliptical, meaning the planet is much closer to the Sun during southern spring and summer, when it receives more incoming solar radiation. But the researchers discovered that the power the sun emits doesn’t increase nearly as much. “The increase in emitted power can’t match the increase in solar flux,” says Liming Li, a planetary scientist at the University of Houston.

NASA’s Hubble Space Telescope photographed Mars on July 18, 2018, capturing a a dust storm that ballooned into a global event and blanketed the whole planet. (Credit: NASA)

The energy excess, in turn, warms the atmosphere near the surface and promotes the uplift of air that can lead to dust storms. But whether the seasonal imbalance is involved with the planet-wide dust storms — like the most recent that blanketed the planet in 2018 — is still an open question.  “The energy imbalance is affecting the entire climate system,” says Creecy, “so it makes sense that it could be playing a role.”

Mars’ summer is also a time when dark, linear tracks have been found on its dusty surface. These recurring slope lineae (RSL) grow gradually over a period of months — and then fade or disappear. Their cause remains elusive, but one idea is that they are caused by dust storms.

Recurring slope lineae, or RSL, are a type of dark marking that advances down some Martian slopes in warmer months and fades away in cooler months. (Credit: NASA/JPL-Caltech/Univ. of Arizona)

In fact, planetary scientist Alfred McEwen at the University of Arizona led a study published in 2021 that found more RSL after a global dust storm in 2018. “RSL are driven primarily by gravity but they need something to get them going,” says McEwen. The results suggest that dust storms, including dust devils, could be such an inciting force.

Beyond that, the 2018 storm deposited dust over much of the Martian surface, potentially explaining why the tracks fade or disappear over time. "Differences in the amount of dust may explain why they’re present on some slopes and not others," adds McEwen.

Going forward, the researchers hope to study locations where these global storms begin to see if there is an energy imbalance there.  Future observations of RSL — and studies of the energy balance at local sites — could help uncover the mysteries of Mars’s dusty summers. In the meantime, the dust season will continue until December 26, the beginning of southern autumn.

How an Astronaut Sleeps in Space