The Kármán Line: Where Does Space Begin?

Earth ends and outer space starts at the Kármán line, some 62 miles (100 kilometers) above the planet’s surface. 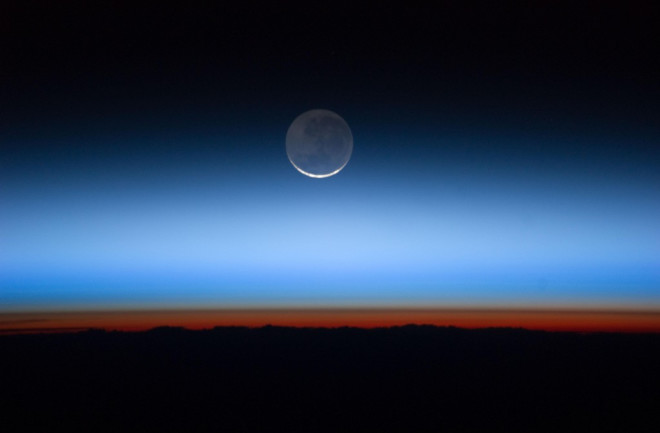 In this photograph captured by an astronaut aboard the International Space Station on July 31, 2011, the oblique angle reveals the layers of Earth's atmosphere, along with a thin crescent Moon illuminated by the Sun sitting below the horizon. (Credit: NASA Earth Observatory)

These days, spacecraft are venturing into the final frontier at a record pace. And a deluge of paying space tourists should soon follow. But to earn their astronaut wings, high-flying civilians will have to make it past the so-called Kármán line. This boundary sits some 62 miles (100 kilometers) above Earth's surface, and it's generally accepted as the place where Earth ends and outer space begins.

From a cosmic perspective, 100 km is a stone's throw; it's only one-sixth the driving distance between San Francisco to Los Angelas. It’s also well within the clutches of Earth's overpowering gravitational pull and expansive atmosphere. So, how did humans come to accept this relatively nearby location as the defining line between Earth and space?

The answer is partly based on physical reality and partly based on an arbitrary human construct. That's why the exact altitude where space begins is something scientists have been debating since before we even sent the first spacecraft into orbit.

What is the Kármán Line?

Experts have suggested the actual boundary between Earth and space lies anywhere from a mere 18.5 miles (30km) above the surface to more than a million miles (1.6 million km) away. However, for well over half a century, most — including regulatory bodies — have accepted something close to our current definition of the Kármán Line.

The Kármán line is based on physical reality in the sense that it roughly marks the altitude where traditional aircraft can no longer effectively fly. Anything traveling above the Kármán line needs a propulsion system that doesn’t rely on lift generated by Earth’s atmosphere — the air is simply too thin that high up. In other words, the Kármán line is where the physical laws governing a craft's ability to fly shift.

However, the Kármán line is also where the human laws governing aircraft and spacecraft diverge. There are no national borders that extend to outer space; it’s governed more like international waters. So, settling on a boundary for space is about much more than the semantics of who gets to be called an astronaut.

The United Nations has historically accepted the Kármán line as the boundary of space. And while the U.S. government has been reticent to agree to a specific height, people who fly above an altitude of 60 miles (100 km) typically earn astronaut wings from the Federal Aviation Administration. Even the Ansari X-prize chose the Kármán line as the benchmark height required to win its $10 million prize, which was claimed when Burt Rutan’s SpaceShipOne became the first privately-built spacecraft to carry a crew back in 2004.

The Kármán line gets its name from Hungarian-born aerospace pioneer Theodore von Kármán. In the years around World War I, the engineer and physicist worked on early designs for helicopters, among other things.

Then, in 1930, von Kármán moved to the United States and became a go-to expert in rockets and supersonic flight around World War II. Eventually, in 1944, Kármán and his colleagues founded the Jet Propulsion Laboratory, now a preeminent NASA lab.

In addition to the boundary line of space, von Kármán’s name is attached to a number of engineering equations, laws, constants, and aerospace designs, as well as a handful of awards in the field. But the Kármán line is by far his most famous claim to fame, which he earned by being among the first to calculate the altitude above which aerodynamic lift could no longer keep an aircraft aloft.

The Kármán line is widely considered the "edge of space," but it's really an inner edge. Earth's atmosphere continues far beyond. (Credit: NOAA)

Lift is largely generated by an airplane’s wings as it flies through the air, creating a force that opposes the plane’s weight, keeping it airborne. But this concept doesn’t work in space. Without enough air, there’s no lift, which is why spaceships don't usually resemble aircraft. (The Space Shuttle and Virgin Galactic's SpaceShipTwo look a bit like planes because they were designed to glide back to a runway on Earth after venturing to space.)

Von Kármán suggested that the most reasonable edge of space would be near where orbital forces exceed aerodynamic ones. And, opting for a nice, round altitude, he decided that 100 kilometers (62 miles) was a good boundary.

Still, despite now having his name attached to the boundary of space, von Kármán himself never actually published this idea.

The Kármán line is more of a “folk theorem,” according to spaceflight historian Jonathan McDowell, who published a paper on the subject in the journal Acta Astronautica back in 2018.

Folk theorems are usually described as well-known ideas in mathematics that weren't published in their complete form. Von Kármán’s original work came out of a conference discussion, but the first fully-fledged publications on the boundary of space were done by Andrew Gallagher Haley — the world’s first practitioner of space law.

In the early 1960s, Haley applied von Kármán’s criteria (orbital forces exceeding aerodynamic ones) more specifically, determining the actual boundary of space is some 52 miles (84 km) above the ground, according to McDowell. This altitude corresponds with the mesopause, which is the outermost physical boundary of Earth's atmosphere where meteors typically burn up. It's also roughly the altitude that was used by the U.S. Air Force in the 1950s when it gave out astronaut wings to test pilots who flew over 50 miles (80 km) high.

In fact, if the Air Force specified the Kármán line as the defining boundary of space, it would strip astronaut wings from some of those earliest pioneering test pilots. That's partly why some experts have argued for a return to the original definition of roughly 50 miles (80 km). From McDowell's perspective, the lower altitude is also just more accurate. The boundary between Earth and space shouldn't be arbitrary; it should be based on physics.

As von Kármán himself wrote in his posthumously published autobiography, The Wind and Beyond: “This is certainly a physical boundary, where aerodynamics stops and astronautics begins, and so I thought why should it not also be a jurisdictional boundary? ... Below this line, space belongs to each country. Above this level, there would be free space.”

How The National Park Service Is Working To Prevent Wildfires

How the James Webb Space Telescope Will Peer Back in Time